Why is Hamilton stalling over new Mercedes contract? 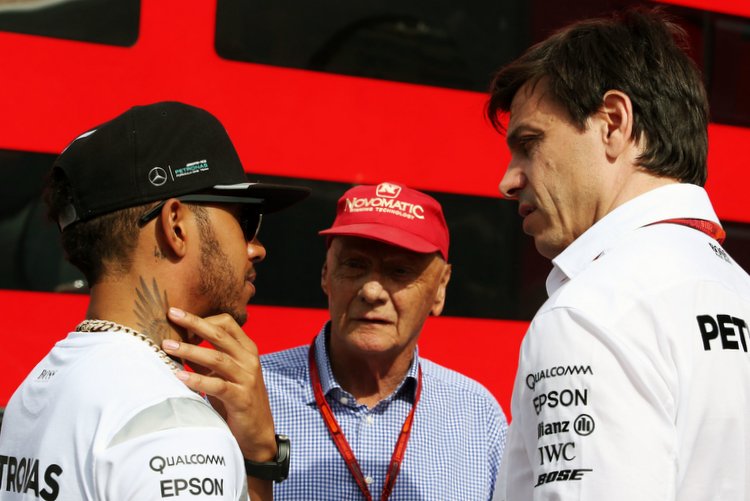 Lewis Hamilton and Mercedes have apparently reached a stalemate over signing a new contract extension to keep the four times Formula 1 World Champion at the team, with rumours floated in the paddock claiming the Briton is holding out for more money.

Auto Motor und Sport report that Hamilton and Mercedes were intent on concluding a new deal before the start of the season, but negotiations have dragged on. The report claims that talks, in Bahrain, to finalise the deal were inconclusive.

They also cite “mischievous paddock rumours” apparently spread by Red Bull that the reigning world champion may be holding out until his team accept a demand of $10-million annual wage increase that would see Hamilton bank close to $55-million per year.

Hamilton himself said in Bahrain: “I’m in no hurry and will take my time. First of all, I want to know which direction Formula 1 is heading for. That can also influence my decision.”

The Briton referring to new plans mooted for Formula 1 in this Liberty Media era. Many questions remain regarding the future of the sport: Will there be a budget cap or not? Who will benefit? Who will suffer? Will the big manufacturers (Mercedes and Ferrari) remain?

Hamilton has also pointed out that this could well be the last contract of his Formula 1 career, “The next contract will be the most important one of my career.”

Mercedes non-executive chairman Niki Lauda, instrumental in luring Hamilton to Mercedes, was typically candid regarding the stalemate, “It all depends on the moods, sometimes he is more expensive, sometimes cheaper. It always depends on how the last race went…”

Beyond his current team, the only other option would be Ferrari, but this would hinge on the Italian team’s big boss Sergio Marchionne wanting to turn a decidedly one-man team, where the focus is predominantly on Sebastian Vettel, into a double-pronged outfit with two drivers capable of battling for the title and both getting equal treatment at the same time.

Should Ferrari countenance such an option the Reds would have two drivers with eight world titles among them as teammates – the most formidable pairing in the history of the sport.

A hefty $100-million plus would be required to fund both these drivers in the same team without any guarantees that the partnership will be successful, and indeed not destructive. But it is well known that what Marchionne wants, Marchionne gets…

The question is: Would such a scenario benefit Ferrari and fulfil Marchionne’s ambition to topple Mercedes?

The allure of Ferrari has not slipped Hamilton who, like most of his peers, has huge respect for the legendary team and said in the past, “I’m a big fan of Ferrari, it’s a fantastic team.”

But at the same, the driver who has only raced with Mercedes power during his F1 career, added, “I love where I am. The atmosphere in my team is incredible and there are something like 1,800 people in my team just to build those two cars. It’s pretty unbelievable. I love the environment and the work.”

Amid all the conjecture Lauda remains optimistic that Hamilton will remain in silver, “Don’t worry, money is not a problem. We have agreed in principle. It’s just about details. Lewis will continue to drive for us.”

Big Question: What is best for Lewis beyond 2018?