Verstappen: My fault, I messed up this race single-handedly 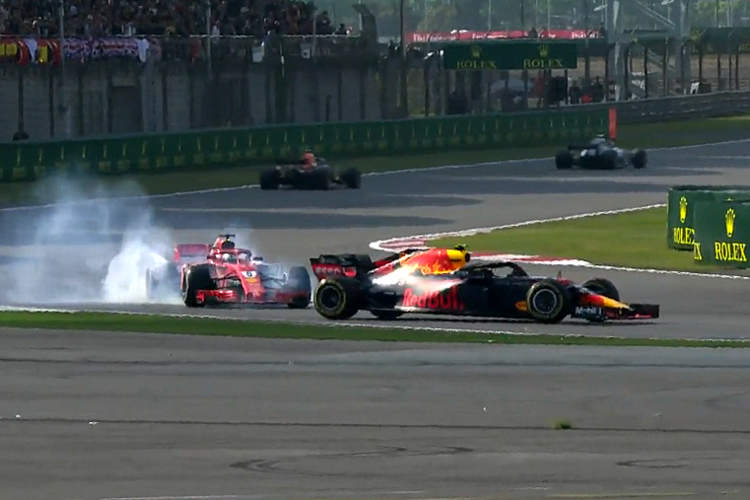 Max Verstappen has accepted the blame for a spell of reckless driving in which he not only compromised his own race but also tangled with Lewis Hamilton then punted Sebastian Vettel and himself out of a possible podium during the Chinese Grand Prix.

After the safety car period, during which Red Bull masterfully pitted both their cars for fresh soft tyres, while their rivals stayed out on ageing mediums.

When the track went green the blue cars were in a class of their own and were able to flex their muscles, but Verstappen’s aggression, coupled to his impatience conspired against him.

His attack on Vettel into the hairpin was a case of wanting too much too soon, a couple of corners later the Red Bull on the fresher tyres would have easily gobbled up the Ferrari a corner or two later.

But credit to the young Dutchman for admitting his error immediately after the race, “I saw Vettel struggling with his tyres and tried to brake late into the corner. I locked the rears a bit and hit him. That was, of course, my fault. It just sucks, but I messed up this race single-handedly.”

“It’s not what you want and it’s easy to say afterwards I should have waited. That probably would have been the best idea but unfortunately, that happened.”

Asked if he needs to turn down his aggression, Verstappen replied, “I don’t think I have to change a lot of things, just I need to learn of course what happened from today. I don’t necessarily have to be less aggressive or anything, because that has nothing to do what happened, maybe its just wanting too much.”

Of his second clash with Hamilton in the space of a week, Verstappen said, “I went on the outside with Hamilton, but there were a lot of marbles, which made me slightly lose control of the car. That was a shame, but nevertheless, there were still a lot of possibilities.

“This is definitely not what I want. Again I think it is a life lesson,” added the Dutchman who had the ignominy of watching his teammate Daniel Ricciardo showing him how it should be done and taking a famous victory on the day.

Nevertheless, he took comfort from his teammate’s win, “The race pace was good, but, as I said earlier, I messed it up myself. Daniel drove a super race. Next time, we’ll try to do that with two cars.”

Verstappen’s shenanigans did not go unnoticed by the FIA race stewards who hit him with a 10-second penalty, which dropped him from fourth to fifth.

Big Question: Is Max too aggressive and impatient?