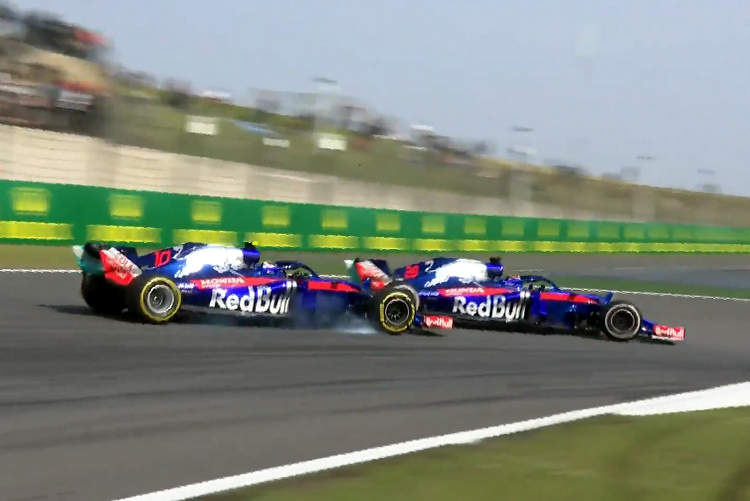 The collision between Toro Rosso rookie drivers Pierre Gasly and Brendon Hartley on lap 32 of the Chinese Grand Prix, was the trigger that turned a mundane race into a thriller and the cause was? Miscommunication!

Gasly on fresh rubber reeled in his teammate and pounced at the hairpin thinking his pitwall had communicated his intentions to their Kiwi driver, but the message clearly did not get through because the Frenchman ploughed into the back of the sister car.

FIA race stewards handed Gasly a ten seconds penalty for his role in causing the accident, but the French rookie claims that the team got their wires crossed.

“I tried to brake to avoid him but it was too late, we made contact and that was it. It’s a shame because it’s the last thing you want to do, to have contact with your teammate and it’s just a shame.”

“I think we misunderstood each other, I expected him to do one thing and he probably expected something else, lamented Gasly who also received a two points penalty on his licence.

As a result of the collision, Hartley was the only DNF in the action-packed race and said afterwards, “I’ve just been chatting with Pierre and clearly a miscommunication. We swapped positions on the first stint as well because I was struggling on the ultrasoft.”

“I let him by on the exit of Turn 14, and the second time I was asked, I planned to do the same, but my feeling is, I don’t know, he must have thought that I was opening a door on entry, which was not the case.”

After a stellar race in Bahrain, Gasly and Toro Rosso fell back to earth with a bang as they toiled all weekend at the wrong end of the field.

Team chief Franz Todt summed up the three days in Shanghai, “Unfortunately, Toro Rosso didn’t perform well. This weekend we struggled from the very beginning onwards – we were near the back on the starting grid and during the race we couldn’t find the pace we needed.”

“In addition to this, we had the collision between the two drivers because of a communication misunderstanding, which is a real shame,” added Tost.