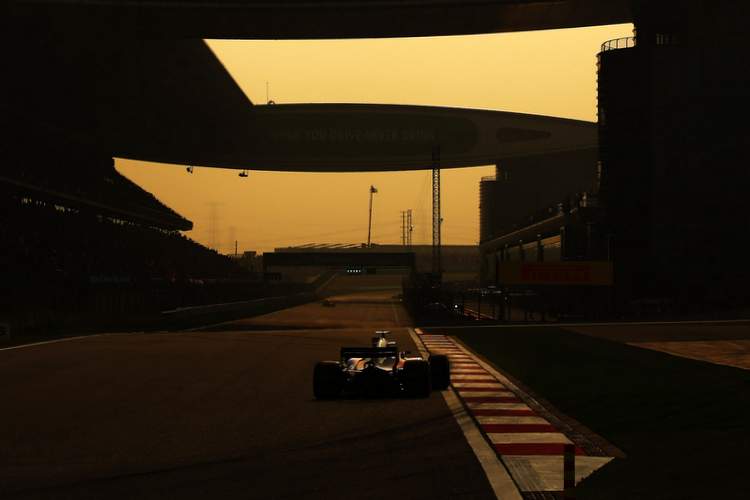 The Shanghai International Circuit provides teams with a very different set of requirements compared to the first two races in Australia and Bahrain.

Firstly, the track is more extreme in terms of what it requires from a car – Aerodynamic performance is far more important, with more medium-high speed corners.

As in Bahrain, the tyres will play a crucial role in the outcome of the race, but this track is front-limited, in contrast to most other tracks on the calendar where the rear tyres give up first. 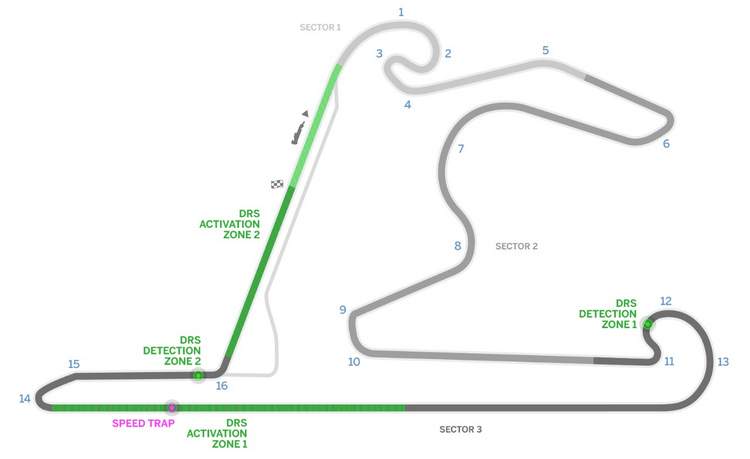 One area that will be similar to Australia and Bahrain is the downforce-drag trade-off. The back straight, measuring over 1 km in length suggests taking wing off would be beneficial to laptime. However, cars need front downforce especially for the high speed corners as well as to reduce understeer, which destroys the front tyres in Shanghai.

The front wing is less drag inducing than the rear wing, so expect teams to run with a higher front to rear downforce ratio than normal, while being aware of unbalancing the car. The full throttle percentage is not particularly high here, and certainly lower than for Albert Park and Bahrain, so teams can perhaps get away with a little more downforce than at either of those tracks. 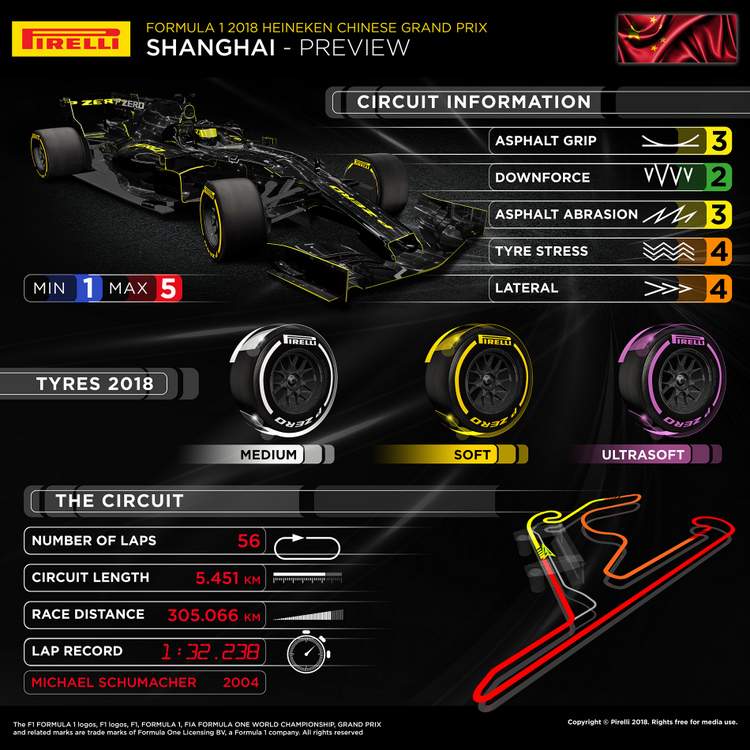 Probably the most crucial car characteristic for Shanghai is a good change of direction, with the aforementioned lack of understeer also vastly improving lap times. This track is not hard on the brakes, but aside from the run into Turn 14, there are reasonable stops into Turns 6 and 11, where gains can be made with a stable car under deceleration. It is clear from the track map that the power unit will still play a noticeable role in terms of pure lap time, as well as enhancing the ability to overtake during the race.

The Shanghai track is unique in the sense that many of the corners are combined such that there are key sequences that must be mastered for a competitive showing. The first of these is the Turns 1/2 complex, which consists of an extremely long high hander that spirals 270 degrees, putting the front left tyre under stress.

The initial turn in is crucial, with a bump at this point, in order to set up the remainder of the sequence. After that, it is all about scrubbing off speed without being too ambitious and running wide. Due to the time spent in this corner, a good car here will be highly beneficial to laptime.

Further on, Turns 7/8 also stress the front tyres, but also require very strong Aerodynamics, with this high-speed section necessitating a good change of direction. Lastly, Turns 12/13 are similar to turn one, but the corner unwinds, as opposed to tightening, on to the long straight. Nailing this area is critical as any losses will be carried all the way down the ensuing straight.

Pirelli has taken an intriguing approach to selecting its tyres for the Chinese GP, choosing to skip a compound, thereby not selecting three consecutive ones. This year’s Medium corresponds exactly to last year’s Soft, the 2018 Soft roughly to the 2017 SuperSoft, while the 2018 UltraSoft is around half a step softer than the same tyre from last year.

It is difficult to get a totally accurate read on strategy from 2017 as the race began in wet conditions and therefore, running on a dry track was slightly unrepresentative.

However, it should be noted that Ericsson ran for 54 laps on the Soft tyres, setting his personal best towards the end of the race. Nobody else ran for more than 40 laps on this tyre, but given the improvements, teams make from year to year on tyre management via suspension design and set-up, it appears as if this tyre should last at least 90% of the race distance.

In 2017, the SuperSoft was capable of doing the last 30 laps of the race, albeit with a performance drop-off at the end, so a stint of this length should be fairly comfortable in 2018. The unknown is the UltraSoft, which could only last for a single-digit number of laps.

In light of this, it is perhaps surprising that teams have not favoured the Medium tyre more heavily in order to confirm the possibility of an Ultrasoft/ Medium one stop, although they will have data from 2017 to use.

An Ultrasoft/ Medium strategy does not look viable, especially given the decent overtaking opportunities around the circuit. The alternative looks to be a two-stop, using only the UltraSoft and Soft compounds. 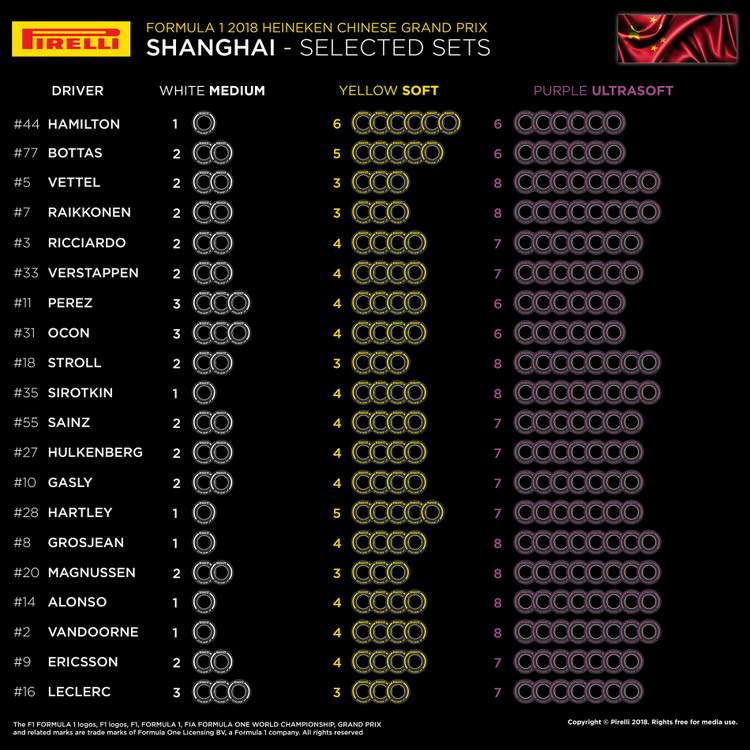 The long back straight, aided by DRS, provides a very good overtaking opportunity in China, although other chances are into Turns 1 and 6, the latter requiring a late braking manoeuvre. After lengthening the main DRS zone in Bahrain by 100 metres, it will be interesting to see if the FIA takes the same approach to decrease the delta between cars necessary for an overtake.

Currently, the weather looks unpredictable on Friday with a chance of showers, whereas, qualifying and the race look set to take place in dry conditions. The possibility of a wet Friday could scupper run programmes, limiting both set-up time and tyre data, critical aspects of any weekend. As is usually the case in China, conditions will be cool, placing low cooling demands on the cars, but potentially introducing graining on the tyres despite the reduction seen since the new regulations were introduced in 2017.

Mercedes will once again enter as favourites, having had the fastest race car for the past two races, and the quickest over one lap in Melbourne. Albert Park provides a stronger indication of performance for China than Bahrain, owing to its greater front tyre sensitivity.

It has been suggested that Ferrari will bring a new floor to cure some of the weakness it has found in its launch car, while Red Bull will hope to finally put together a clean race to show its true pace. The low full throttle percentage could play into their hands this weekend.

Elsewhere, the midfield battle will be as intense as ever, with Toro Rosso, Haas, Renault and McLaren all looking strong in the race on Sunday, while the interesting tyre situation could allow some different strategies, bringing Williams, Force India and Sauber into the mix.