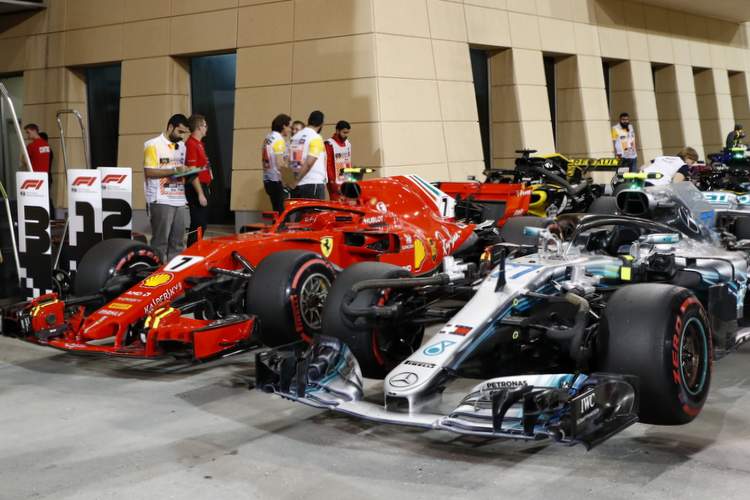 For the second race in a row, Sebastian Vettel celebrated on victory at the Bahrain Grand Prix while Formula 1 world champions Mercedes and Lewis Hamilton rued yet another one that got away and head to China with revenge vital.

By winning at Sakhir, after his season-opening success in Australia, the German became the first Ferrari driver since Michael Schumacher in 2004 to take the first two races of a season.

Since 1982, when Alain Prost started strongly but lost out in the title race to Keke Rosberg, every driver who has won the first two races of a season has been crowned champion at year-end.

But Vettel, a four times world champion and keen student of F1 history, knows the battle is just beginning and he cannot put too much faith in statistics.

“They had less races in 1982, so probably…I don’t believe in all those things,” the German said after the floodlit race at Sakhir. “Sometimes they work for you, sometimes against you.

“We have a very very long season ahead of us. It’s clear that we need to improve, we have to improve our car, our package. I guess everybody’s trying to do the same so the competition is very high.”

Vettel will also be well aware that the calendar has possibly flattered him.

The Ferrari driver also won in Australia and Bahrain last season, when China was the second round of the championship rather than the third, but his title challenge imploded later in the campaign.

Hamilton was second in Australia and Bahrain last year, however, compared with a second and third so far.

If Hamilton loses out again next weekend in Shanghai, a race that he has won five times previously and that Mercedes has won in five of the last six years, then there will be serious concern in Brackley and Stuttgart.

In Bahrain, Valtteri Bottas finished second for Mercedes after chasing down Vettel in the closing laps when the Ferrari driver was on badly worn soft tyres. The gap at the end was 0.699 of a second; close but not close enough.

Mercedes team boss Toto Wolff told reporters afterwards that his team felt sure they had a winning tyre strategy.

That was because Bottas and Hamilton were on mediums that could go to the end whereas Vettel had to decide whether to pit again and lose the lead or stay out and risk running out of rubber.

“This was the moment where I would say probably 90 percent probability was on us winning and we lost that,” said Wolff.

He recognised however that Ferrari had swept the front row in qualifying when Mercedes were not good enough, with Hamilton also having a five place penalty for a gearbox change that left him lining up in ninth.

That setback cost Hamilton – who missed out on victory in Australia after a virtual safety car period played into Ferrari’s hands – any chance of winning.

And that was cause for concern for a team that have won the past four drivers’ and constructors’ titles but are now second behind Ferrari.

“The points that you don’t make are the ones that could decide the championship,” added Wolff.

Big Question: Are Ferrari ahead of Mercedes in the pecking order after two rounds?