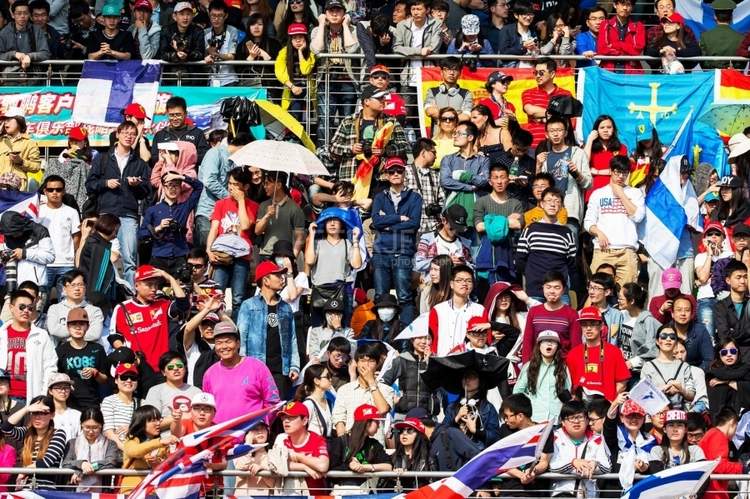 Press Release: Formula 1 is preparing yet another opportunity for the public to experience at first hand the greatest racing spectacle on the planet, the next edition will be presented by Heineken, and will take place in Shanghai from 13 to 15 April.

The buzz, excitement and passion of an F1 Grand Prix event will be brought to the heart of the city at the same time as the drivers and teams will be tackling the third round of the FIA Formula 1 World Championship at the Shanghai International Circuit (SIC.), the Formula 1 2018 Heineken Chinese Grand Prix.

The Heineken F1 Shanghai Festival will take place at two prestigious locations, allowing people to live the Formula 1 experience as never before.

The opening ceremony will be held Friday at 4.30 pm and will be attended by two Formula 1 World Champions: the three-time (1969, 1971 and 1973) champion and Heineken Ambassador Sir Jackie Stewart and the 2016 title holder, Nico Rosberg.

The Heineken F1 Shanghai Fan Festival will be open Friday from 4 pm to 10 pm, Saturday and Sunday from 10 am to 10 pm. Performers and DJs will be on stage, including among others top presenter Jeff Kung, an award-winning musician, actor, producer and events and music show host, as well as Armin Van Buuren who will headline the Heineken stage on Friday evening, and Angela Chang, who will perform on Saturday night.

Also, there will be show cars from Renault, Pirelli and SIC with the Grand Prix shown on giant screens, with live links to the SIC Paddock. There will be an area dedicated to esports, with F1 simulators where the fans can experience the sensations of being at the wheel of a virtual F1 single-seater.

Each activation will explore the visceral elements of Formula 1 as recently demonstrated through the Engineered Insanity multi-platform marketing campaign, informing and opening up the F1 world to a new generation of fans.

The Engineered Insanity campaign will come to life in Shanghai with high impact out-of-home advertising, featuring proximity in nine tube stations and mega LED screens in high-trafficked areas of the city.

Three main Chinese social media and content platforms – Weibo, TouTiao and WeChat – will feature as of today an official F1 page, featuring ads and information on the Festival and the Chinese Grand Prix.

The Heineken F1 Shanghai Festival will see the debut of Axel, the F1 mascot, who will elevate the atmosphere of the F1 Festivals through edgy entertainment and impressive urban dance skills to engage with the audience. Axel will also have some gaming experience and will join guests on the various games around the Festival.

Saturday 14 and Sunday 15 April, the M1NT Club and Cocktail Lounge will host the F1 House. Heineken will host the Official F1 After Party on Sunday with world Class DJ’s like AfroJack, Armin Van Buuren and DJ R3hab will entertain VIP guests, local celebrities and influencers in one of the Shanghai’s premium entertainment venues, characterised by a fantastic 360° view of the Pudong skyline as well as the Bund and People’s Square.

Alexandre Molina, Director of Events at Formula 1, said: “We are very proud that the first F1 Festival of the year will take place in Shanghai, a destination city in a country like China where there is an incredible potential interest for Formula 1. The city will have the opportunity to live the Formula 1 2018 Heineken Chinese Grand Prix in a unique way and discover the engineered insanity which characterise the pinnacle of motorsport.”

Jacco van der Linden, Managing Director at Heineken China, said: “Heineken® is excited to be playing a leading role alongside Formula 1 bringing to life Asia’s largest F1 Fan Festival in Shanghai. Building on the spectacular success of last year’s Heineken City Experience, we are aiming to further open the world of F1 to racing fans and casual watchers. We will leverage our online and offline communications channels across China.”

Zahariah (Liza) Abdul Rahman, Head of Group Strategic Communications at Petronas, said: “We are delighted to be part of such an important and innovative event as the F1 Festival in Shanghai. Petronas has an historic presence in Formula 1 and believes in the enormous but yet unexplored potential that this sport has, especially in countries like China. The F1 Festival concept is the best way to bring new fans close to Formula 1, to its essence of entertainment event that combines technology, passion and emotion.”

The Shanghai event is the first of four F1 Festivals scheduled for this year. The other three will take place in Marseille, at the same time as the French Grand Prix, held at the Paul Ricard circuit (22-24 June,) Berlin, in conjunction with the German Grand Prix at Hockenheim (20-22 July) and in Miami, while Austin hosts the USA Grand Prix from 19 to 21 October. Four unique events to unleash to a new audience the greatest racing spectacle on the planet.