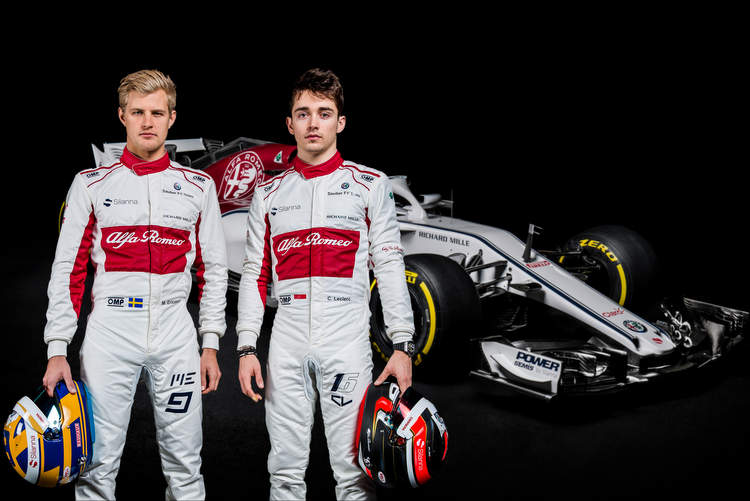 Ahead of the opening race of the 2018 Formula 1 season in Australia on 25 March, we assess Sauber’s chances of success in the first season of their partnership with Alfa Romeo and a return to updated Ferrari power.

Sauber took a good step forward in the second week of testing, the second version of the aerodynamic package was effective. The Swiss team were not only able to close the gap to the field, but with Williams already fight for the penultimate place.

Charles Leclerc finished 15th in the final test, but also ended in the gravel on three occasions. One excursion cost the team five hours of track time.

Similarly, Ferrari powered Haas will be the benchmark upon which Sauber will be judged, and with updated Prancing Horse power units there is a chance that the team will shake off the perennial backmarkers tag they inherited last season.

The Alfa-Romeo branding will attract a great deal of attention, thus the onus is on Sauber to deliver and move up the grid.

Sauber have developed an unfortunate reputation as one of F1’s perennial strugglers, and 2017 was no different as they finished 10th in the constructors’ standings for the third time in four years.

Their five points were, at least, an improvement on the two-point haul of the previous season, with Pascal Wehrlein responsible for the sum of their total after top-10 finishes in Spain and Azerbaijan.

It was not enough for the young German to keep his seat for 2018, however.

Ericsson is retained for a fourth season at Sauber despite having not contributed a single point since racking up nine in his first campaign with the team in 2015.

The 27-year-old Swede has always denied that his own backers were linked to a takeover of Sauber in 2016, but there is no doubt Ericsson has been afforded more opportunities than most to impress in F1.

Ericsson: “I still believe we are in the midfield, I think we are in the lower part of the midfield. The motivation is really high because we know that we have all the tools this year, we have a new car but also a new engine, a strong engine, and that was always a problem last year.”

Leclerc has emerged as one of the brightest prospects in motorsport over recent reasons, winning the GP3 series in 2016 before being crowned Formula 2 champion last year.

The Ferrari junior will be aware of the need to impress, with predecessor Wehrlein left without a seat this year, but his primary focus should be outperforming teammate Ericsson.

Leclerc: “There are so many new things to me, so many parameters to the performance of the car that are new for me. Let’s hope we can catch up a little bit with the midfield during the season and then obviously I’ll have to improve as a driver, try to work on myself and try to get used to these cars as quickly as possible.”

Sauber have to make the most of their new technical partnership with Alfa Romeo. Long gone are the days of Nick Heidfeld and Robert Kubica steering them to second and third in the constructors’ championship in 2007 and 2008 respectively. Increased reliability is of paramount importance for them.
Help Leclerc fulfil his potential. Being part of the Ferrari system means Leclerc may well have Kimi Raikkonen’s seat in his sights come the end of this season. With that kind of motivation, Leclerc could fly if given a car capable of fighting for points.

Not finishing bottom of the constructors’ championship should be the priority for Sauber. They should look to pick off the likes of Toro Rosso and Haas, as well as McLaren if the fallen giants continue to struggle.