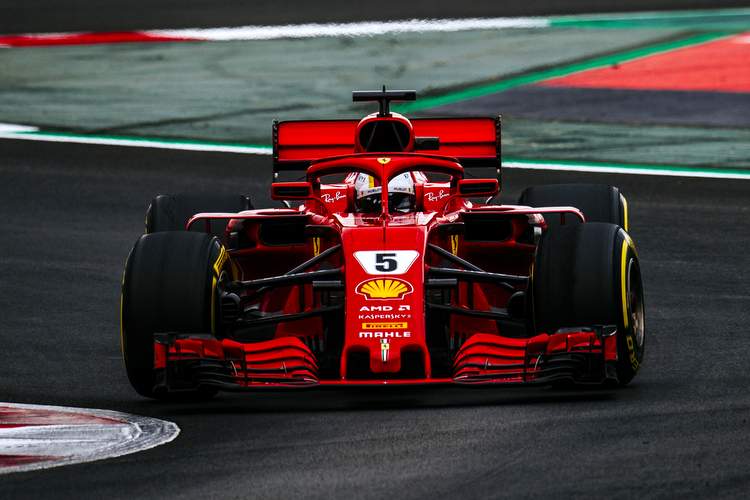 Formula 1 winter testing has now ended for Sebastian  Vettel because the next time he meets up with the SF71H will be in Melbourne, for free practice at the season opening Australian Grand Prix.

The final day of testing for the German was given over to a programme that included set-up and tyre evaluation with different fuel loads, the classic race weekend simulation that signs off winter testing for every driver.

By the end of the day, Vettel had completed no fewer than 188 laps (equivalent to over 875 kilometres,) in all conditions, including a false start test, with other cars on track. His best lap was a 1:17.182 was well below the lap record and was set on the new Hypersoft tyres that are making their debut this season.

Vettel said after ending his final day of testing, “The times on these test days don’t mean much. The important thing is that the SF71H has proved to be very strong, allowing us to run all day without any significant problems.”

“We are still working on some things for the first race and it’s not really possible to make any predictions based on the performance of the other teams because everyone is running a different programme. However, I’m happy for the guys in the team.”

“There’s been a lot of times, what’s important is the car was working all day. We did nearly 200 laps so that was good! Overall the conditions were better than yesterday. It’s always difficult to compare but it matters in a couple of week’s time, that’s when it’s serious.”

“It always depends what you do. It’s the wrong conclusion to look at the timesheet, there’s a lot more than one lap. I think today the track was also quite fast but we were running a slightly different programme to others.”

“Obviously our target is to be upfront but this is the wrong time to say anything. You’ve seen more cars going round than I have this week and had more time to look at the timesheets as well, so I’m sure in the next couple of days we will know a little bit more heading to Australia.

“For now the important thing is we know our car is working the way we want, the way we expect. I think we can still do better, so let’s see whether we get there. Also its always difficult to know, nowadays there are so many variables. It used to be only tyres and fuel, now there’s energy, and modes, whatever. So it’s the wrong time to draw any conclusions.”

In the wake of his last day if testing before the season opener at the end of this month, Vettel summed up, “I’m pretty happy. It’s not my first winter testing and preparation for the season, usually it’s scheduled, the race sim, and always something happens.”

“We got a smooth run, no car issues, no red flags, so we could get through. Also for the guys, they did the stops. So that was solid. I don’t know in terms of pace, you always think you could have done better here and there, just like racing! But it was OK.”

“Mostly that we did a lot of laps, also the race [simulation] we had a chunk of laps, that was important in understanding the car to be honest, and understand what we need and things we still need to get on top of,” added Vettel who will be targeting a fifth F1 world title this season.

It was cloudy and chilly at the Catalunya circuit and then a bit milder in the afternoon, with an average temperature of 15 degrees (28 track temperature) with a few gusts of wind.

Tomorrow (Friday), Kimi Raikkonen will round off testing with a similar programme to his team-mate.