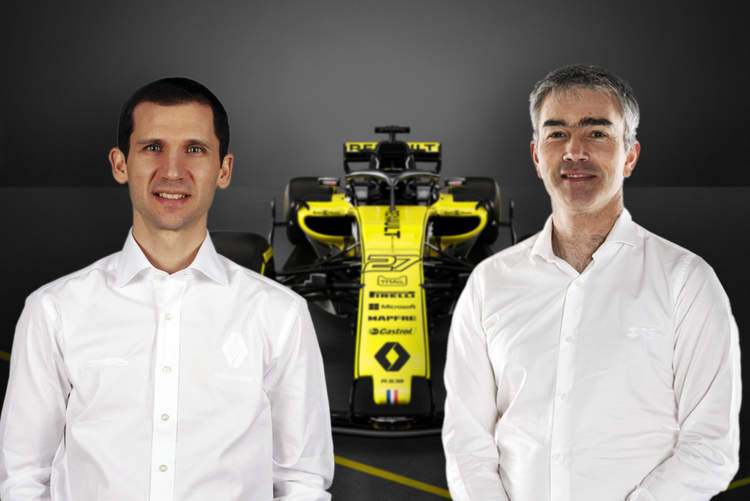 Renault Sport Formula One Team Technical Directors Nick Chester (Chassis) and Rémi Taffin (Engine) give their insights into the Renault RS18 in a Q&A releaseed by the team on the day of the launch.

What were the key learnings from 2017?
Nick: 2017 was the first year of the new, wider cars with their wider tyres. This led to a very different aero package including wider front wings and wider floors, all of which meant more downforce. With these new packages, there was a lot learnt as the season progressed. Likewise, the R.S.17 was the first car developed between Enstone and Viry from the outset and we had a reasonably quick car – the fourth fastest on the grid by the end of the season. We did, however, experience growing pains in terms of reliability and there were elements on the chassis side we could have done better. 2017 was nevertheless a positive step in competitiveness with some useful lessons learnt.
Rémi: 2017 was about making the car quick and, in particular, helping the car be the fourth quickest on the grid. From an engine perspective what we went through was a little bit of pain in not finishing all of the races, but we were also capable of producing a good level of performance which helped us have the fourth quickest car, so it was that perennial balance between performance and reliability. We did see our power unit on the top step of the podium three times last year, so it’s clear we have the potential to achieve our aspirations. We just need to raise our game across the board, and all the elements we need to do this are there. We could also have had a very good points scoring level had we finished all of the races. That’s our target for 2018: to put the car in a position of finishing all races with regular, strong points hauls. What we worked on through 2016 was to get Enstone and Viry working together again, it was clear we needed to do that. 2017 showed we were capable of putting it all together and that we can work as a team. We make good decisions and we go through all the good and bad moments together and that’s a very clear and respected process.

Where can we see the changes in 2018?
Nick: For 2018, on the chassis side, the rules are reasonably similar to 2017. The main change is halo coming in and the engine cover fin being removed. In concept, the R.S.18 is a development of the philosophy of the R.S.17 with everything we learnt last year added to it. We learnt a lot last year in terms of the aero package so there should be a lot more scope with this car.
Rémi: We finished 2017 with a strong set-up with the engine and the chassis so the main area for us is to capitalise on the latest specification of the power unit and all the progress we have made in terms of reliability. We have gone through an extensive and productive dyno programme with the R.E.18 with the target of trouble-free testing and races. We want to develop performance and also balance reliability, which in turn enables the team to develop the understanding of the car.

What are the key areas of evolution for the team in 2018?
Nick: On the chassis side, there are substantial differences in the suspension, which should give us better ride over bumps and a little bit more predictability for the drivers. There’s a lot of aero development, not only for downforce but to have a more accessible performance envelope, meaning we have a car which is easier to put on the limit and allows the drivers to extract maximum performance.
Rémi: It’s a clear statement that we want to deliver much more performance through the season and we’ve made that provision. There’s a clear link in between what we will keep developing with the engine and what we can do with the chassis.

What are the main changes in the power unit realm for 2018?
Rémi: The main change in terms of regulations is that there are fewer power units available for the drivers over the season; just three each now. In fact, it’s actually more challenging than that, as we are limited to three ICE, but only two MGU-K and two energy stores! Our first priority is for reliability and it’s going to be even more difficult as we have to get another quarter out of the engine life on top of the target for 2017. Of course, we knew the three engine rule was going to come, so it’s something we scaled in for 2017 in preparation for 2018. We started designing the 2018 engine in 2016 with the three engine limitation in mind and we have completed more hours on the dyno than ever before.

How significant are the facility changes and upgrades?
Nick: There’s been a lot of improvement at Enstone. We have upgraded machinery, computers and infrastructure. Entire departments have moved into new locations and the Enstone you see at the start of 2018 is very different from the Enstone of two years ago. With better facilities and new equipment comes improved working practices and ultimately better output. Even things like a new canteen make a difference. Enstone has a good vibe, the new recruits have integrated really well and the open team spirit persists.
Rémi: It’s great to see the new facilities at Enstone. Anyone from Viry going to Enstone is impressed and is happy to see Renault taking it seriously. All the spending is for the same, collective aim: to win. It’s a clear sign and shows us that Enstone and Viry as a team are sharing the same resources and making good decisions. Here at Viry too we have some stuff in the pipeline. Viry has a long-term plan and we will start to see more significant changes too. In the first instance Viry has been more about details and specific upgrades. That said, Viry is made of three parts that are respectively twenty, thirty and forty years old and we need to ensure a productive and pleasant work place for our staff. We are going through a process of upgrades and a new building will come into use in 2019 to ensure our facilities are at the Formula 1 latest standards. We want to enter a new era and make sure we are in line with the expected level. Formula 1 as a sport will continue to evolve and we have to match this.