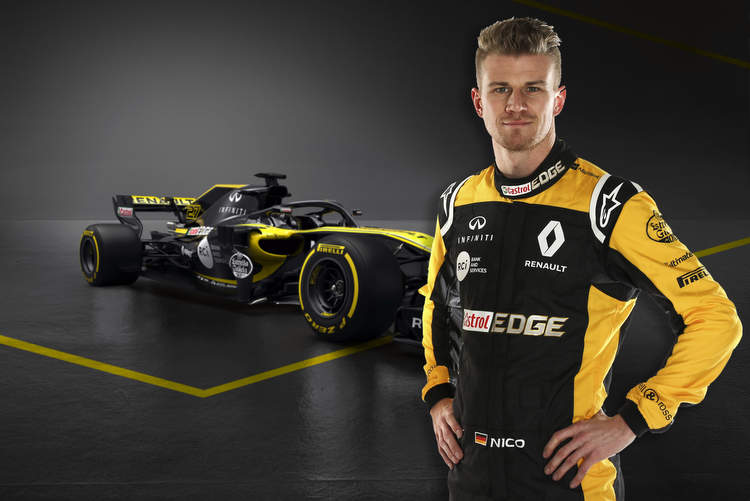 Nico Hulkenberg enters his second year as a Renault driver with confidence and hoping that their newly launched RS18 can moce the team closer to the sharp end of proceedings.

On the occasion of the team launching their new car, Hulkenberg gave his thoughts ahead of the new season.

How are you looking forward to the season ahead?
Nico Hulkenberg: It seems like a very long time since I sat in a car and raced and that is very much what I want to be doing. Certainly, when I have visited Enstone and seen everything going on with the development of the Renault R.S.18 I’m very enthused about the season ahead. Add that to the news from Viry about the development of the power unit and everything looks and sounds good; it’s all positive and there are exciting times ahead.

How well primed is The Hulk?
NH: I’m ready to rumble. I’m feeling positive and optimistic in myself. We’re in a good position.

What could be possible in the season ahead?
NH: We know what we want to achieve, but it’s a competitive sport and we know there are other teams out there with the same aspirations. We won’t know how good a job we’ve done with our car as everyone else has also been working hard on their car over the winter. This is what makes testing so interesting, and it’s when we’re on track that we’ll see how much progress has been made in the off-season.

How will your second season with the team be different from your first?
NH: You want every season you contest to be better than the one before. 2017 was my first with the team, and there’s an element of learning different processes and personnel, but ultimately the goals are the same. For this year we want to build on the good position we built last season. 2017 was about bedding in, now I want to get ready to go. I get a good feeling, we have put a lot of work in over the winter and hard work usually pays off. I’m eager to get out there. Put me in the car.

How different is the team relative to where it was a year ago?
NH: It’s bigger and there are more buildings in Enstone. The team is growing and it’s a rewarding experience to be part of this growth. The factory facilities are being improved and modernised. Everything is heading in a healthy direction and at healthy speed.

On track what differences do you expect to see?
NH: Hopefully we’ll be battling for positions a bit further up the order. The cars will look quite similar apart from smaller shark fins and the addition of the halo. I like the look of the R.S.18 and I know everyone at Enstone and Viry has been dedicated to improving all areas of the package. When we race, we’ll have new tyres and I’m looking forward to some softer allocations for Grands Prix. This should mean more opportunities for multi-stop races, which should make things more interesting.

How do you rate the Renault Sport Formula One Team driver line-up?
NH: It’s strong. There’s a young, hungry and good driver who’s on the other side of the garage and he’ll keep me on my toes! Hopefully I can show him a few tricks too.

2017: Nico was announced as a Renault Sport Formula One Team driver for 2017 in October 2016 and made his race debut for the team at the season-opening Australian Grand Prix in Melbourne.

2013: For 2013 Nico joined Sauber, impressing with third on the grid at the Italian Grand Prix for the Ferrari-powered C32, taking fifth in the same race. His best finish of the season was fourth in the Korean Grand Prix and he ranked tenth in the standings that year.

2011-2012: With Williams opting for Pastor Maldonado at the squad, Nico moved to Force India in a reserve position for 2011, driving in Friday practice sessions. He was promoted to a race seat the following year, qualifying for the season-opening Australian Grand Prix six places ahead of team-mate Paul di Resta. In that year’s Belgian Grand Prix he finished a career-best fourth. Nico looked set for glory in the season-ending Brazilian Grand Prix, however a safety car period robbed him of a 45-second lead in the race so he was eventually to finish in fifth. He closed the 2012 season in eleventh.

2010: Nico made his Formula 1 debut with Williams, racing alongside the highly experienced Rubens Barrichello. In his third race, the Malaysian Grand Prix, he out-qualified Rubens and he scored his first Formula 1 point in the same race. After finishing a season-best of sixth in the Hungarian Grand Prix, Nico secured pole position on a difficult damp Interlagos track, with two of his qualifying laps on slick tyres fast enough for his P1 position. His fastest qualifying lap was over a second ahead of next quickest, Sebastian Vettel. Nico ended the year 14th in the standings.

Pre-Formula 1: After a successful karting career, Nico’s car racing started in German Formula BMW where he dominated the 2005 season, following in the footsteps of countryman Sebastian Vettel as champion. 2006 saw a graduation to German Formula Three and a race win, but it was the second season of the A1GP series, which started late in 2006 – contested in identical Lola chassis with more than 500 horsepower from their Zytek V8 engines – when people really took notice of the rising star. Driving for A1 Team Germany, Nico claimed nine wins from the season’s 22 races, including six in a row. His emphatic performance secured Germany the crown and cemented Nico’s position as the most successful driver in A1GP history.

Two seasons in the F3 Euro Series from 2007 onwards followed, with third in the standings and four wins in his first outing, and the championship title and seven wins in the second. In 2009, Nico became one of only three drivers to win the GP2 Series in their first season, following in the footsteps of Lewis Hamilton and Nico Rosberg. He secured his crown with five wins and five other podium finishes.