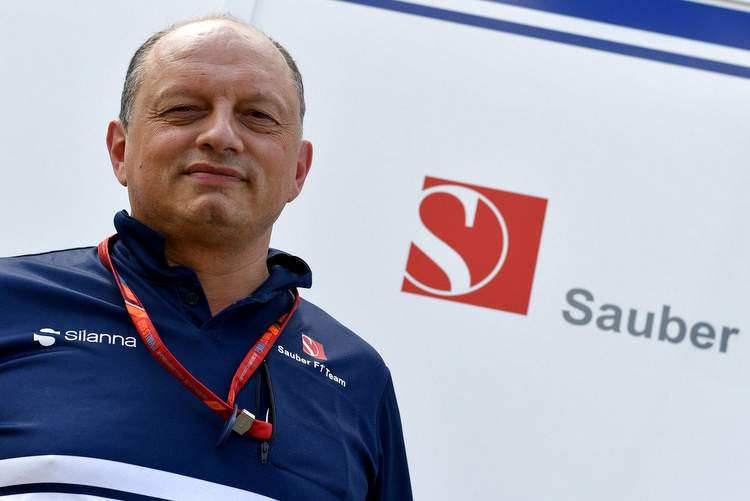 Frederic Vasseur has been a busy man since he was appointed team principal at Sauber, first, he put an end to a Honda engine deal before it even began and then installed a programme aimed at making Sauber a relevant team in Formula 1 once again which spawned the recently announced Alfa Romeo deal.

Shortly before being ousted from the helm of the Swiss team in June, Monisha Kaltenborn had engineered a deal for the team to be powered by Honda in 2018.

A priority on Vasseur’s list of things to do, when he replaced her, was to terminate the deal. This he did and since then strengthened the bond with their engine supplier Ferrari, as a result the team will now carry Alfa Romeo branding in 2018 and beyond.

In an interview with the official F1 website, Vasseur explained the significance of the new deal, “I am proud of the team. Life is not easy when you are at the back. The new project started very late, so I am super happy to see that the whole team kept its strong motivation.”

“We are improving. We are on a good way. We’ve made some good steps on the car in the factory. So there is real progress visible. Small step by small step – but moving steadily forward. Miracles don’t happen by snapping your fingers.”

“Success is always the addition of small things, so if motivation is there the rest should follow. I definitely do believe that – especially when you have the chance to team up with such an iconic partner as Alfa Romeo.”

When he took over the team it was in disarray, morale was low and light at the end of the tunnel was distant.

Asked what was the biggest weakness he encountered when he took up his position as team chief, “Not one weak point but the addition of the fact that the team struggled massively in 2016.”

“The 2017 car was ready very late – it was a new project and if you are six months late that adds to a difficult situation, as it is not possible to catch up easily.”

“The decision to run the 2016 Ferrari engine this year also didn’t help the situation, but I knew all these facts before I joined. There is the saying that hope dies last – and in the end, I consider it a good challenge!”

“You cannot try and split that and point the finger at one factor. When you are at the back you have to pay attention to every single area and details.”

This year Sauber had the services of highly rated Pascal Wehrlein and journeyman Marcus Ericsson. The German impressed with what he had, but as a Mercedes backed driver, his drive with the team is over. While the Swede may still be in the frame, but only because of his close contacts with the team’s new owners.

With the advent of the Alfa Romeo deal, Sauber has edged closer to being a Ferrari B-team (much like Toro Rosso is for Red Bull) therefore it is understandable that the powers that be at Maranello will want their up-and-coming drivers to be accommodated by their partner.

Thus the question of drivers is a hot topic because Sauber has two seats available for 2018. Smart money is on Charles Leclerc will get the nod for his first season in Formula 1, while there is a strong lobby within Ferrari to have Antonio Giovinazzi also in the team for next season.

Vasseur would not confirm the driver line-up but did reveal that there would be talks with Ferrari to determine who will pilot the team’s cars next year.

He added, “We have to be realistic: even if we move a good step forward next season we will not fight for wins.”

“It took Red Bull Racing seven years before winning the championship – or five before winning a race – and the same goes pretty much also for Mercedes – and they even took over a team that were world champions!”

“You can’t be faster than this – good things need time. Having said that, we need drivers that will fit our plans. The worst-case scenario for us would be having someone who dreams of being world champion next year!”

In closing, Vasseur summed up the immediate future, “We will have a completely new project. Sauber started very late last year, but are on time with the 2018 project. But, of course, the first Barcelona test at the end of February will tell us where we are.”

“Everybody is full of expectations – I think we have made some strong choices. First on the engine: to have the 2018 [Ferrari] engine, that will mean a significant step forward for us – and we have started with a new car philosophy,” concluded Vasseur.

Big Question: Can Sauber become a force in Formula 1?