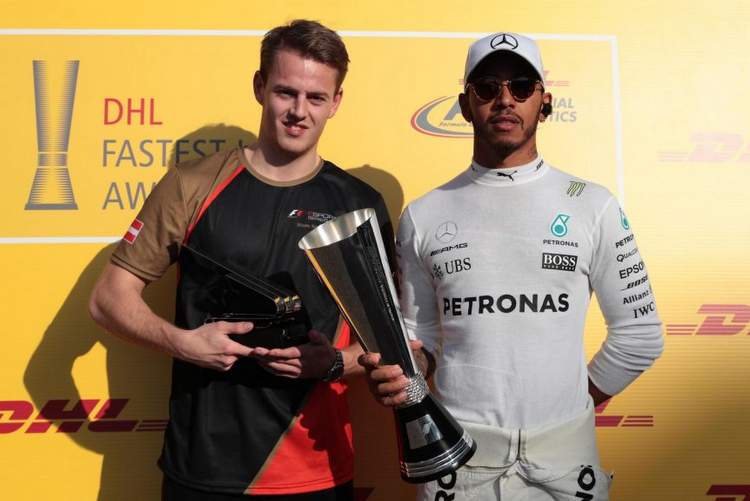 DHL, the official logistics partner of Formula One, once again presented the Fastest Lap and Fastest Pit Stop Awards for this year’s F1 season in Abu Dhabi on Sunday.

Lewis Hamilton was honoured as the driver with the highest number of fastest laps over the 20 Grand Prix races, while the award for the shortest service times, and consistently excellent team performance in the pits went to Mercedes.

Hamilton was not only the overall champion of this year’s Formula One season; he was also the driver with the fastest lap in the most races. This is the third time Hamilton has been awarded the DHL Fastest Lap Award, having previously won the accolade in both 2014 and 2015. The title passes to Hamilton from last year’s winner, Nico Rosberg, so that Hamilton is now tied in the overall rankings with previous record holder Sebastian Vettel.

“It is never our specific target to set fastest lap in a race – so when we do, it is a sign of how quick our car has been in race conditions,” said Hamilton. “It also shows the consistency of the Pirelli tyres this year. These cars are the fastest we have ever driven in F1 – and it has been cool to set a few all-time lap records. They have been a challenge for us drivers to master, more physical to drive, and that is how it should be.”

Since 2007, the DHL Fastest Lap Award has been presented to the driver with the highest number of fastest laps in a Formula One season. However, 2017 was especially exciting due to various rule changes, one of which being that wider tyres and cars were permitted in the races for the first time this year.

As a result of the new dimensions, the contact surface of the tyres was increased by 25 percent. Wider front and rear wings created more downforce and thus enabled higher speeds. Drivers and teams were able to achieve even faster lap times than in previous years, with new lap records set on no less than 11* races during the season. 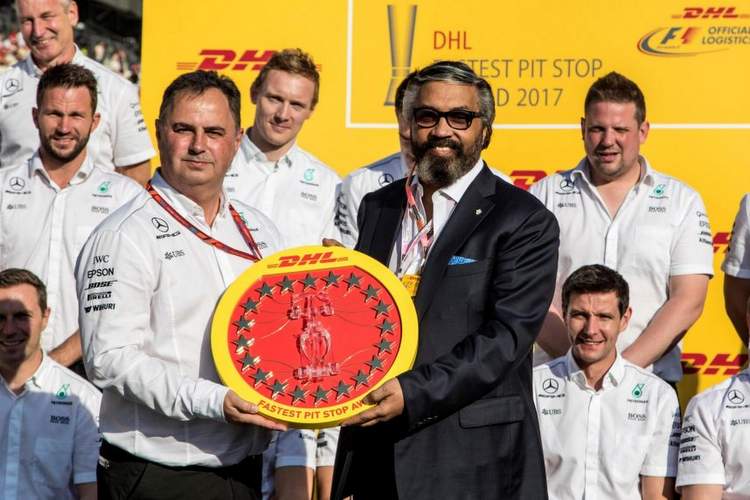 This year’s DHL Fastest Pit Stop Award went to Mercedes, marking the first time the team has received the accolade. Presented since 2015, the award honours the outstanding behind-the-scenes team performances that play a key role in driver success. Pit stops require speed, cooperation and efficiency – attributes that are also crucial to DHL.

A new points system was introduced in 2017 for the DHL Fastest Pit Stop Award, stimulating even keener competition between the teams on the race track and in the pit: The award does not just go to the team with the fastest pit stop, but to the team that most consistently achieves the fastest pit stops over the course of a season – an achievement that has become an even greater challenge with the concurrent introduction of wider, heavier tyres in Formula One.

Just like the points system for the driver and constructor championships, each team and each driver is evaluated on the basis of their respective fastest pit stop results in each of the races. The ten fastest pit stops are awarded points on a scale of one to 25: According to the new rules, the fastest pit stop receives 25 points, while the tenth fastest receives one. The overall winner was Mercedes gaining the highest number of points for the entire season, a total of 465 points*. The best time in the individual ranking was achieved by Williams with a pit stop time of 2.02 seconds in the British Grand Prix*.

“The pit-stop is a crucial moment of the race and can make the difference between winning and losing,” said Ross Brawn, Managing Director, Motorsports at Formula 1. “It’s not only a matter of how fast a crew can change the tyres each race, but also how consistent they are throughout the season. By winning the 2017 DHL Fastest Pit Stop, Mercedes-AMG Petronas F1 Team proved to be the most consistent and the best in class this season, so congratulations to them!”