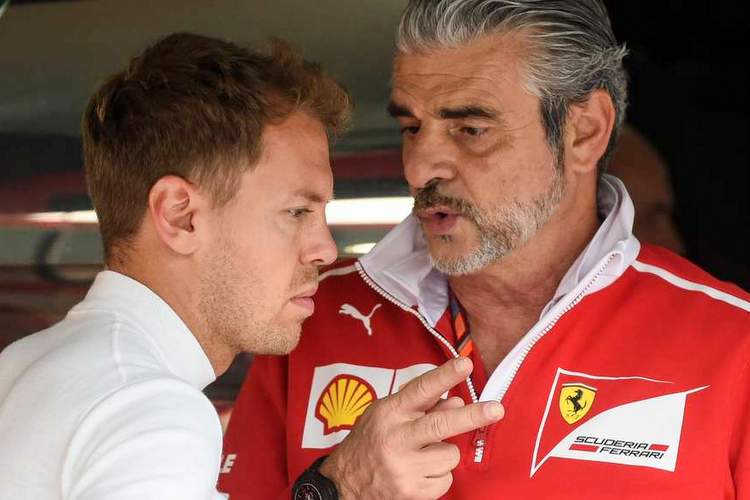 Sebastian Vettel has backed his Ferrari F1 boss Maurizio Arrivabene, saying that he is the absolute right man for the job and pointing out how the Italian has galvanised the team since 2014.

The Maranello outfit were on a roll in the first half of the season with Vettel leading the championship and looking likely to grab his fifth title and the team’s first since 2007, but after the summer break they have been plagued by several high profile issues that scuppered their title ambitions.

Being in the Ferrari hot seat, Arrivabene came under-fire from certain quarters of the Italian media and invariably his ability to lead the most sport’s most successful into the future was questioned. Reports emerged suggesting that Mattia Binotto would be promoted to take over the team principal role.

But recently Ferrari president Sergio Marchionne affirmed his faith in the man he put in charge of the Reds, with Vettel now echoing the sentiments.

During the drivers’ media conference, ahead of the Mexican Grand Prix weekend, Vettel was asked if Arrivabene was the right man for the job, to which the German replied, “Absolutely. What is his strength? Look at the results, look at where Ferrari was after 2014, how competitive Ferrari was in 2014 and how in unreasonable shape it was.”

“The spirit was down. He is the key person responsible for bringing that back, to open things up and change things that were done for 20 years before that.

“He has an innovative and creative way of thinking, he is the right man, he is a good leader, he is well respected by all the people – no matter what level of the company. Absolutely I am a fan.

“If you look at the results, they are coming. This year we would have liked it to be a bit different, but these things happen – we’re still growing the team, growing the culture, we are still on that journey.

“The expectation is always high. We have made massive steps in the last three years and we have to continue to make those steps.

With three races remaining in the championship, Vettel’s title hopes are all but over as his rival Lewis Hamilton needs only to finish fifth on Sunday, in Mexico, to secure his fourth title. Mercedes wrapped up the constructors’ championship in Austin four days ago.

“The pity was there were a couple of races where we were just not there to fight,” lamented Vettel. “I would have loved to even be on three wheels in those races, but they obviously got away from us and we were just sitting on the sidelines.”

“That was bitter. In the end it made a big difference, [but] we are now where we are – we still have a chance, we want to win the last three races and I think we can.”

“We have proven probably everybody wrong – there was a lot of talk in the winter about Mercedes, who were favourites, a lot of talk about Red Bull, but not so much about Ferrari.”

“Overall the team has been incredible to be where we are now. No one expected us to be that strong, so there were a lot of positives,” added Vettel who has not won a race since the Hungarian Grand Prix in July.

Big Question: Is Arrivabene the man to lead Ferrari to championship glory?