Marchionne: Choosing between Arrivabene or Binotto is idiotic 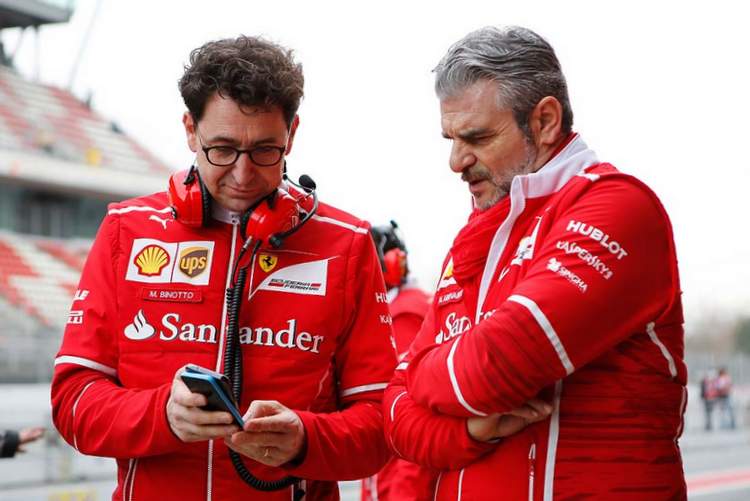 Reports suggesting that Ferrari F1 boss Maurizio Arrivabene will be replaced by the team’s technical chief Mattia Binotto are wide off the mark and would be an “idiotic” move according to the Italian team’s president Sergio Marchionne.

After watching Sebastian Vettel and Kimi Raikkonen finish second and third at the United States Grand Prix, Marchionne was asked if Arrivabene would be axed, to which he replied, “No, both Mattia and Maurizio have been involved in this process. Picking one or the other is a bit idiotic.”

“They were both at the table when the operation was going on and technically I’m involved too, I was the chairman. But that’s not going to solve the issue.”

“I don’t think we need to overhaul the team. We need to win, that’s the more important thing. I don’t think it’s attributable to a single guy. Processes may have not helped and those things are being addressed.”

Ferrari and Vettel had the upper-hand until the summer break in August, but the team’s challenge imploded after Monza with a series of well-documented incidents that handed the advantage to Mercedes and Lewis Hamilton, while the Reds have not recovered since then.

Marchionne acknowledges that the final Asian leg was the team’s downfall, “The things that have happened in the last three Asia races have really been a collection of the most unfortunate events.”

“With the exception of the technical failures we’ve had, which are quality driven, everything else was just a fluke and it happened. The likelihood of us repeating those errors is hopefully very small.

“We’ve made one change to the organisation by bringing in someone who’s got experience on the quality side to try and strengthen our skills. The rest of it I think is within the way in which we manage.

“I have spoken to Arrivabene and Vettel here and they are focused and still believe in us. They need support, because the chance to recover from here is less than 50 per cent. But saying this, Ferrari cannot surrender,” added Marchionne.

Ferrari leave Austin knowing that Mercedes are Formula 1 constructors’ champions for a fourth year in a row and that Hamilton will most likely wrap up the drivers’ championship in Mexico on Sunday, with two rounds still remaining.

A season that promised so much fizzled into disappointment for the Maranello outfit, the positive is that they showed signs of brilliance and for the first time since the advent of the new turbo hybrid era they had Mercedes chasing them on occasions.

Nevertheless, the foundation for a strong 2018 has been laid and the team will look to capitalise an their strengths while working hard to exorcise the weaknesses that handed the titles to their rivals.

Big Question: Should Arrivabene be replaced?