Verstappen: One idiot steward makes the decisions against me 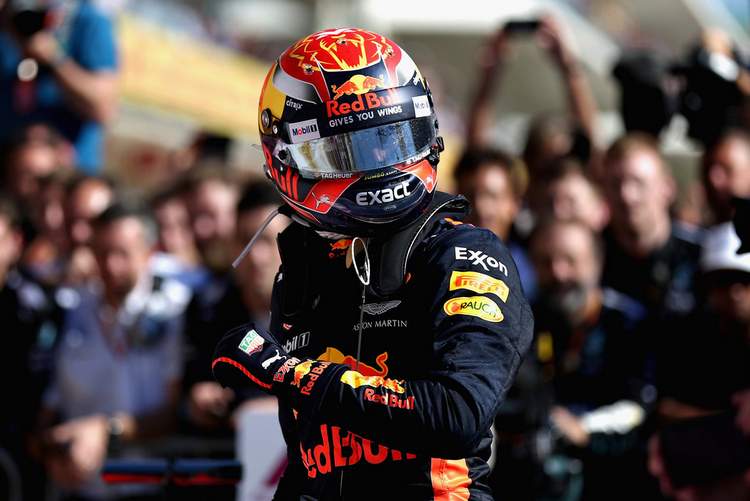 Max Verstappen, and just about everyone who watched the United States Grand Prix, thought he did enough to finish third and celebrate on the podium, but it was not to be as the FIA race stewards slapped him with a five seconds penalty which turned that third place into fourth.

The young Dutchman was voted Driver of the Day by F1 fans for his superb drive through the field form 16th on the grid. The Red Bull driver providing a large chunk of the entertainment on the day at Circuit of the Americas.

His pursuit of Kimi Raikkonen and battle for third was highly entertaining as he relentlessly attacked every inch of the track in his trademark all-or-nothing style. It was riveting stuff both live and on the telly.

His final lap was extraordinary, prompting huge cheers as he muscled past Raikkonen to take third place, as he crossed the line Verstappen had no doubt he would be celebrating on the podium, he was even ushered into the pre-podium room.

But when Raikkonen arrived in the same room shortly afterwards, the penny dropped and he got the message, departing with a wry smile and rather miffed.

Later, when facing the media, Verstappen let rip, “It’s just one idiot steward up there who makes the decisions against me. Also in Mexico. Now I get a five-second penalty and a penalty point, for what?”

Although Verstappen didn’t mention him by name, the “idiot” he was referring to was the FIA appointed race steward Garry Connelly.

“At the end of the day, everybody’s running wide everywhere, there are no track limits, and then the crowd is loving it and you do something like that in front of world TV.”

“You pick someone out from the podium again and tell them to go away. At the end of the day, I still had a great race. I’m happy with fourth. Just the way they did it is unbelievable.”

“We had a great race but with these stupid decisions you really kill the sport. I really hope the fans didn’t like this decision and hopefully next year they won’t come.”

“You can’t protest, it’s in the rules. They know how to make therules. At the moment it’s in their favour. They decide and you can’t do anything against them which is of course really weird. But what can you do? It’s not good for the crowd. I really hope next year nobody is coming, because like this, the sport doesn’t make sense.

“Everyone is loving it, great action. You go five or 10 centimetres in the inside of the kerb, everyone is running wide everywhere, nobody’s saying anything, like in qualifying at Turn 19 you could just run wide wherever you liked. And they killed the race basically like that,” added Verstappen.

Red Bull team chief Christian Horner was appaulled by the decision and told reporters, “It’s unbelievably harsh to give Max a penalty for that. It’s wrong.” Report here>>>

Verstappen’s father Jos also made his feelings clear on Twitter: