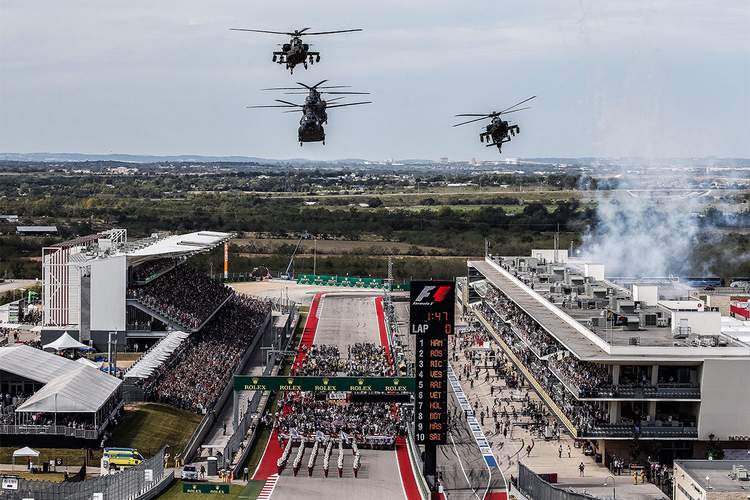 United States Grand Prix promoter Bobby Epstein is still pushing for his race in Texas to be split from neighbouring Mexico on the Formula 1 calendar in an effort to further boost attendance.

The two races are on back-to-back weekends, with Austin’s Circuit of the Americas playing host on 22 October before the action shifts to Mexico City’s Autodromo Hermanos Rodriguez a week later on 29 October.

Epstein has long maintained that the scheduling is more geared for Formula One’s convenience, from a standpoint of logistics and saving on freight costs, than in the best interests of fans and sponsors.

Any hopes that the sport’s new owners Liberty Media, who took over in January with a fan-first approach, might change the arrangement were dashed when the pairing was retained on the draft 2018 calendar.

“They came out with their calendar in June… and I don’t expect that to change any time soon. I think it’s going to be that way,” Epstein told Reuters in a telephone interview.

“It would certainly be better for the promoter if the races were further apart on the calendar. Mexico with Canada. We’d be with Brazil.”

Brazil’s Interlagos circuit in Sao Paulo is the penultimate race in November while Canada’s Circuit Gilles Villeneuve in Montreal enjoys its moment in the limelight in June.

“We had a large audience that came from Mexico and now they’re sort of forced to choose between which one to go to,” Epstein said.

”If one of the manufacturers wants to do something in that time slot, and they have a budget to do one race in October, then they are going to have to choose between the two. They’re going to spend their money only at one of the places.

“If they are spread out, you actually have the chance for them to activate in June and in October. To do something in both,” he added.

Mexican Grand Prix organisers are happy with their date, which comes just before the annual Day of the Dead holidays.

That race is backed by the government, which pays the hosting fees to Formula One and sees it as an important driver for tourism and Mexico’s image abroad.

Last year’s United States Grand Prix drew an event record three-day crowd of 269,000 thanks in large part to a Taylor Swift concert on the Saturday evening that was watched by 80,000 people.

Justin Timberlake is this year’s headline act, with qualifying moved back to later in the day to reduce the gap between the track action and the music.

Epstein said ticket sales were on a par with last year’s and thanked Liberty for helping to secure that change.

“I think on Saturday again we’ll have a massive crowd for qualifying. And by moving qualifying a little later in the day, it just gives the fans a great day,” he said.

Last year’s qualifying and concert were about five hours apart.

”I don’t know that we would have had that flexibility before and it shows a real willingness to work with the promoter,“ added Epstein. ”It’s really helpful.

“If you’re going to make a commitment to building it (Formula One) in the U.S., those are the kind of seemingly little things that you can do and need to do.”

Epstein expected also to see more Lewis Hamilton fans in Austin, with the Mercedes driver leading Ferrari’s Sebastian Vettel in the championship by 34 points ahead of this weekend’s Japanese Grand Prix.

Hamilton, winner for the past three years in Texas, is a regular visitor to the United States.

“He is creating a persona that is beyond that of a driver, and I think it’s helpful,” said Epstein.

“We’re opening a karting track the week of F1, so I hope Lewis is there to cut the ribbon or drive the first lap.”