Vettel: Stroll just drove into me 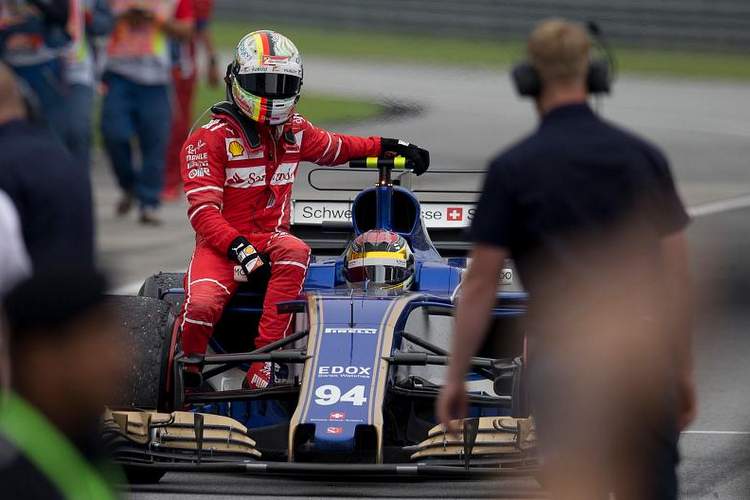 Sebastian Vettel’s Formula 1 world championship bid could suffer yet another major setback after a bizarre post-race incident at the end of the Malaysian Grand Prix at Sepang.

The Ferrari driver, now 34 points adrift of Mercedes’ championship leader Lewis Hamilton with five races remaining, was in a collision with Lance Stroll’s Williams on the slowing-down lap.

“Stroll just drove into me. I mean, seriously.” he exclaimed over the team radio.

The impact smashed the rear left of the Ferrari with potential damage to the gearbox, which would incur a five-place penalty if it needs to be replaced for Japan next weekend.

“I hope not because, as I said, it was completely unnecessary,” said the four times world champion after hitching a ride on Pascal Wehrlein’s Sauber back to the pits.

Vettel had started in last place after a power unit problem in qualifying but worked his way up to fourth in a performance that emphasised the car’s pace and what might have been otherwise. Hamilton was second.

It could have been even worse for the German, however, with Finnish team mate Kimi Raikkonen failing to start after a loss of power on the way to the grid.

“It all added up to our hardest race of the year, as we had to confront problems that we will now analyse in depth,” commented team principal Maurizio Arrivabene.

Vettel suggested 18-year-old Stroll had not been looking where he was going but the Canadian sounded baffled by that. The stewards decided to take no further action.

“I think it´s enough now of cars turning one way or the other and ending having a shunt. That was a bizarre one, for sure,” said Vettel.

Stroll said he had been driving slowly back into the pitlane, steering a normal line and going through switch changes.

“It was just a very strange incident. Obviously the race wasn’t going on so it wasn’t intentional for either of us,” said the eighth-placed finisher.

Big Question: Who is to blame for bizarre collision?