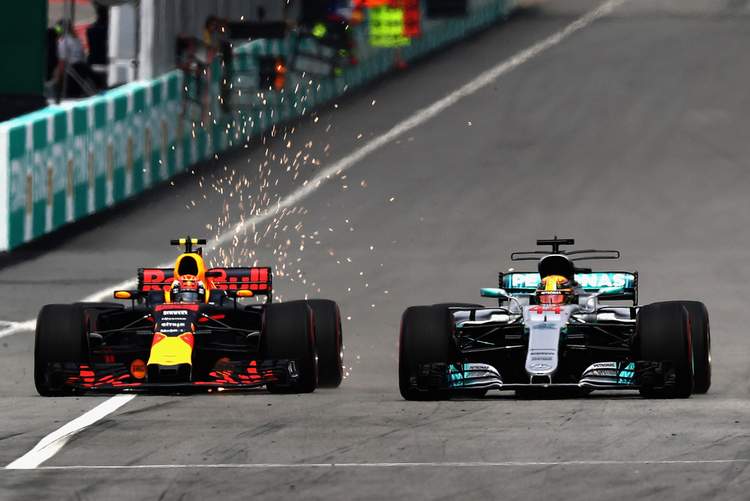 Max Verstappen’s 20th birthday gift came a day late, but when it did the Red Bull driver unwrapped the winner’s trophy on the top step of the Malaysian Grand Prix podium as he claimed his second career victory, this time beating Lewis Hamilton fair and square at Sepang.

In terms of the world championship battle, Hamilton extended his lead to 34 points over Sebastian Vettel who recovered from 20th on the grid, after missing out on qualifying, to fourth place at the end of the race at which point his car was destroyed – proper damage control in terms of points (but not the car!) from the Ferrari driver on a forgettable weekend for the Reds.

Verstappen won the race by 12 seconds after starting from third on the grid, from the moment the red lights went dark he tucked in behind the Mercedes of pole sitter Hamilton, stalked him until lap four when he pounced to claim the lead where he stayed until the chequered flag waved.

The Dutchman managed the lead to around 10 seconds, controlled the pace and in the end cruised to his second career victory, at the last grand prix at Sepang for the foreseeable future.

Verstappen said on the podium, “In the beginning straight away the car felt good and I saw Lewis was struggling a bit with traction. I used my battery as much as I could and of course he has more to lose than me in the championship so I went for it in Turn One and then I could do my own race. The car was unbelievable, if I had to speed up I could. It was a very tough race and incredible to win.”

Hamilton settled for second place as he clearly had no answer for the winning Red Bull driver. The Mercedes was not at ease around the twists of Sepang, however relative to his teammate Valtteri Bottas, Hamilton managed to squeeze substantially more out of the car. Bottas was fifth, crossing the finish line 44 seconds behind his teammate.

Hamilton said of his afternoon, “Big congratulations to Max and happy birthday, he did a fantastic job today. The race was a tough one, obviously they just had the upper hand on us today. We love driving this track, it is the most difficult circuit so it’s a great thing.

“I feel good but I think we have some work to do with the car. Obviously we didn’t have the pace this weekend so there’s still work to do, still races ahead. There’s some that we can win but we have to keep pushing.” added Hamilton.

Ricciardo made it two Red Bull’s on the podium after another strong performance. His overtake on Bottas was riveting stuff and a superb example of proper wheel-to-wheel racing without the tears.

Thereafter there was not much action among the top three during the course of the race. This changed briefly towards the end when Ricciardo had his mirrors full of the red Ferrari.

Vettel closed up and looked set to snatch third, but the Aussie was smart with his defence and managed to keep the red car at bay. Soon after Vettel appeared to lose the will, or ability, to fight and allowed Ricciardo to increase the gap and cross the finish line unchallenged in third.

Ricciardo summed up, “At the start it looked like Mercedes were struggling. I tried to get Bottas as fast as possible but he defended well. Seb came really quick at the end and I thought he was going to be a handful, but he only had one strong attack and then we were able to pull away.”

“I guess it was pretty lonely, but it was hot and physical so nice to get a podium. Congrats to Max, he drove great all weekend and a good race for the team,” added Ricciardo.

Hot on the heals of the mayhem in Singapore, Ferrari’s run of misfortune continued at Sepang after Vettel’s lack of running in qualifying, due to a turbo issue, things got worse when Kimi Raikkonen – second on the grid – failed to start the race due to a technical problem.

Vettel starting from last would have been happy to have limited the damage as much as he did, perhaps only ruing a missed podium which at one point seemed possible until he ran out of firepower at the very end.

Fourth was as good as it got, but Lady Luck (or make that Lady Bad-Luck) was not finished with the Maranello outfit…

With the race over, on the slow down lap, Vettel collided with the slowing Williams of Lance Stroll, the Ferrari ending up with the left rear tyre ripped off and sitting on the engine cowling.

A truly bizarre end to the race, with Vettel coming to a halt in his three-wheeler before receiving a lift to the pits on the Sauber of Pascal Wehrlein.

The German reflected on his incident packed afternoon, “I went on the outside to pick up a bit of rubber –  I think Lance wasn’t looking and wanted to do the same. I was there already and we had contact – it was completely unnecessary. I think he just didn’t look. It’s not my fault if someone decides to pick up rubber and hit another car.

“I think we had a very good car – if we start ahead I think we win the race. Obviously that didn’t happen today. I think we were the quickest car for the majority of the race but we had to start last. Obviously with Kimi retiring before we started it was a tough race,” added Vettel.

It was a disappointing weekend for Bottas, who simply had no answer to his Mercedes teammate’s pace in qualifying and in the race. Nevertheless the Finn managed to salvage fifth place in what must rate as his worst showing in silver.

Force India enjoyed another strong double points finish, with Sergio Perez in sixth at a venue he always excels at, while Esteban Ocon grabbed the final point for tenth place after an incident packed afternoon for the Frenchman, which included a puncture early on in the race.

Stoffel Vandoorne was seventh for McLaren, on a weekend in which he had the edge over teammate Fernando Alonso who was 11th when the chequered waved,

Williams were also double points scorers with Lance Stroll and Felipe Massa finishing eighth and ninth respectively. The pair going wheel-to-wheel on a couple of occasions, with the Canadian teenager getting the better of the Brazilian veteran.

Of his collision with Vettel, Stroll said, “It was the in-lap, I was just driving very slowly back to the pitlane. I think we’ll have to go to the stewards, but it was a very strange incident. The race wasn’t going on so there was no intention from either of us.”

Pierre Gasly had a solid debut for Toro Rosso despite not having access to his drinks bottle in the hot and humid conditions that prevailed on the day. Although his teammate Carlos Sainz was well up the road before he was forced to retire, Gasly did all that was asked of him in his first Formula 1 race by bringing the car home in 14th.

With regards to the unexpected victory for his team, Red Bull boss Christian Horner concluded, “To beat Mercedes fair and square was beyond our expectation. I thought we had a great race car but I didn’t think it was going to be quite that great.

“Max has endured so much bad luck this year and the race he drove today was absolutely dominant. A brilliantly controlled race. He’s never let his head drop too much. I’m so pleased for him because the last time he was on the podium was in April, this was just the injection that he needed,” added Horner.

There was drama before the start as on his laps to grid, Räikkönen reported a loss of power. Ferrari attempted to resolve the problem on the grid but eventually the decision was taken to roll the Finn’s car back to the garage to fix the issue.

In the end, however, no solution could be found and Räikkönen, who was set to start from second on the grid was handed a DNS instead.

When the lights went out, pole position man Hamilton held his advantage and led from Verstappen. Bottas made a good start and managed to get past fourth-on-the-grid Ricciardo. Further back, Vettel quickly began to carve his way through the pack and by the end of lap one he was up to 13th place from 20th on the grid.

Verstappen, though, was the man on the move and on the next tour he used DRS well to attack Hamilton in Turn 1 with surprising ease and the Red Bull driver took the race lead.

Ricciardo also attacked Bottas but the Finn resisted the threat and held third place. Vettel, meanwhile, continued to press forward and by lap seven he was in 11th place behind Alonso, and by lap 10 the German had overtaken the McLaren driver and passed Magnussen to take P9.

Ricciardo also found a way to move ahead, launching an attack on Bottas into Turn 1. The Finn fought back and they tussled hard through the next three turns before Ricciardo at last drew ahead and firmly shut the door on any further resistance.

Vettel’s march continued. By lap 14 Vettel was setting purple sector times and was running in sixth place, just under 30 seconds behind leader Verstappen, and 23s adrift of title rival Hamilton. On lap 21, Vettel made his next move, tucking in behind Perez and passing the Mexican under DRS into Turn 1.

The Ferrari driver then quickly closed on fourth-placed Bottas but before he could pass the Finn on the track, Hamilton triggered a round of pit stops for the front-runners on lap 27 by moving to softs. Verstappen followed on lap 28 with Vettel also heading towards the pit lane.

But while the Red Bull driver swapped starting supersofts for soft tyres, Vettel made the opposite switch. Bottas was the last of the top five to pit and when he did so he had lost fourth place to Vettel. At the front, Verstappen now led Hamilton by 6.5s, with Ricciardo a further 11.7s back.

The race among the top three then settled as Verstappen held the gap to Hamilton at around nine seconds and Ricciardo edged towards to the Mercedes driver.

Vettel, though, was continuing to push ahead and by lap 42 he was just 4.4s behind Ricciardo and on lap 46 the German slipped inside DRS range of the Red Bull.

Ricciardo’s defence was solid, however, as he bypassed traffic and dropped back-markers into the space between himself and Vettel and then invited attacks in an effort to make the German burn his tyres. The tactic evidently worked as the final laps began Vettel drifted out to three seconds behind the Australian.

Ahead, Verstappen was coasting and after 56 laps the Dutchman crossed the line to take his second career win in his 55th grand prix.

Hamilton held a useful second to open out a 34-point lead over Vettel who finished fourth behind Ricciardo. Just as there had been drama before the race began for Ferrari, there was more after the flag as on the slow down lap Stroll collided with Vettel, destroying the rear of the German’s car.

Behind Vettel, Bottas took fifth place, with Perez finishing a solid sixth after starting the race in ninth place.  Vandoorne took seventh ahead of Stroll, Williams team-mate Massa and the second Force India of Ocon. 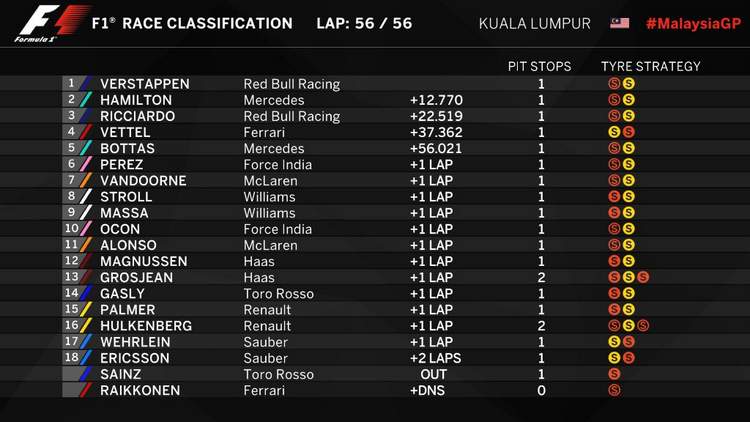