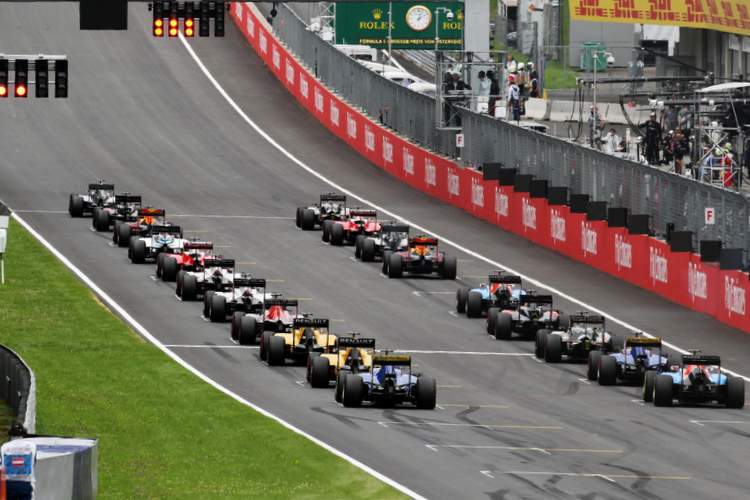 With the introduction of the complex hybrid engines Formula 1 realized something needed to be done to keep the cost in check like limiting the number of engines than can be used in a year.

But since the new engines are complex systems with lots of different components, the old system no longer could be applied. After all, the engine is just a part in a complex system where all components are important and expensive; all of which need to be durable.

When the number of components used in a year exceeds four the car will suffer a five place grid penalty for each new element, with an additional five points every time a new tier is used. So the first penalty for using a fifth component will be ten positions on the grid.

A gearbox change also causes a five position grid penalty, unless the car has completed six races with the previous one or failed to finish in the last race.

We are just past 2017’s halfway point but already many drivers have incurred grid penalties for using more than four unique components.

With the token system out of the window every new power unit can have significant changes affecting all components on a systemic level, meaning they need to be changed together.

The teams demand results and the power units are not competitive. So the manufacturers take risks with the design, changing the whole concept if need be, and indeed the engines do get more powerful… and fragile. If the plan was that the engines would get more reliable, it certainly did not work out for Honda and Renault.

So the penalties add up quickly; we’ve seen 65 place grid drops after multiple PU swaps in one weekend, which is kind of bizarre when there are only 20 cars in competition. Last weekend no less than nine drivers suffered grid penalties, and only four drivers started from the spot they qualified on.

Many people would rather see the end of the system, including Ross Brawn and Jean Todt, the latter claiming he would accept proposals to improve the system and announced there will be a meeting to discuss the penalty system.

Not everybody is opposed though. Force India’s Otmar Szafnauer sees it working as intended, removing the incentive to spend money on engine development. Andy Green even points out that because the penalties mix up the field, they enhance the show.

What are people complaining about?

It is an easy viewpoint for a team that has little to spend and a reliable engine. Teams who are on the receiving end of bad luck won’t share those views.

Like it or not, the system has some nasty side effects.

For instance when the total grid penalty exceeds the number of grid slots. Such a large penalty makes qualifying an exercise in futility. Why qualify if you end up last anyway, other than to test the car? And why would you not change all the components at once, when you are already starting last?

If the system was meant to discourage changing a components beyond the fourth one, it actually makes the teams change several components at once.

Moreover, we see some drivers skip Q2 even when they ‘only’ have a five place grid penalty. If they do participate they use the prime or option tire, not the qualifying tire.

If they make it into Q3 they are forced to use the tire that got them there, even though they get pushed back on the grid afterwards. So they generally do not make it into Q3 and end up starting at the back anyway but on their tire of choice.

In fact, at Monza Red Bull considered not running in Q2 to keep a free choice of tires for the race. When the rain came it lifted the obligation to use the Q2 qualification tires and Red Bull duly qualified 2nd and 3rd, ending up a few places higher on the grid than anticipated. If it were dry they might have skipped qualifying altogether.

The current five place per component penalty system tends to encourage the affected drivers to skip qualifying! So why take qualifying seriously?

It is obvious that Formula 1 needs to limit costs somehow by increasing reliability and durability. But now it punishes drivers if they make an effort in qualifying. The grid penalty system is a burden.

But what could replace it?

Just doing away with it altogether would increase the difference between the rich and the poor teams, who cannot afford a new engine every race. Force India has a point there.

Subtracting constructors or drivers points falsifies the competition. The driver with the most points wins in the end, so anything affecting the tally is artificial. Ultimately the championship could be decided by the points loss incurred from PU changes. That might take the shine off the title.

Make the penalty itself lighter.

A two place grid position drop per component is bad enough to prevent the engine manufacturers from introducing new components for minor improvements.

And if they must introduce new components it gives them a fair chance to qualify away from the back of the grid and an incentive to not change any more components than necessary – as every extra component will push them further back as long as they don’t add up beyond the grid length.

Changing multiple components would be a thing of the past except for the back-marker teams who are last anyway, giving them a benefit other teams don’t have.

Also, the obligation to use qualifying tires for the race should be revised.

When a driver fails to end up with the best ten on the grid after penalties, allow free tire choice if they have announced the component change they took the penalty for prior to qualification.

Likewise, drivers that get promoted into the top 10 by grid penalties of other drivers need to use their Q2 tires after all.
With this limitation gone, taking part in qualifying should normally improve the starting position an situation.

We’d still see the occasional shake-up, but the drama is contained and the competition remains intact; everyone will make a serious effort at qualifying.

Swapping components will always remain frustrating for the stricken. But a reduced penalty would make restraint on swapping multiple parts worthwhile. Chances are it will reduce the number of components used more than the current system does.