Zak Brown: We need to make a decision this week 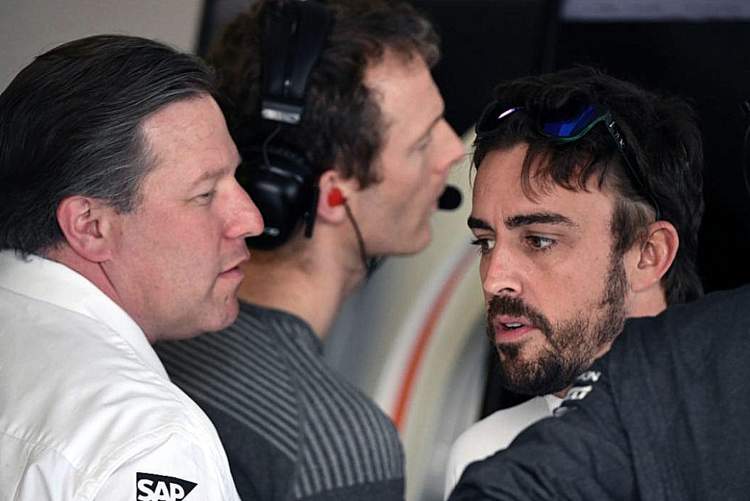 In the wake of another dismal performance by Honda powered McLaren, this time at Monza, talk of a divorce gathered steam after the Italian Grand Prix but as team chief Zak Brown explained that ironing out the nitty gritty of the deal is a complicated matter but insists that this week a decision must be made on the future of the team.

Speaking after a double DNF for the orange cars on Sunday, Brown told Sky F1, “It’s more than one problem but it’s fairly consistent, MGU-K, MGU-H we’ve had lots of failures there. We think we understand the lack of power in the engine. It’s not different problems all the time but its a few problems.”

McLaren have a couple of options they are working on behind-the-scenes. The first to stay with Honda and perhaps prolong the misery of the past three years or ,secondly, engineer an power unit supply from Renault. However he was asked, in a worst case scenario, if McLaren may find themselves without an engine supplier when the dust settles.

To which he replied, “I don’t think that will happen. It’s not what we will allow to happen. The regulations are in the middle of the year so for a fourth team is to be supplied. We’ve been very close with the FIA and Chase Carey and they’re being very helpful to get through this.”

McLaren are drowning in their worst season ever with no end in sight, Brown acknowledged, “We need to get more competitive. This weekend showed we’re not making any significant progress. How long can you wait before you have upset drivers, partners, fans? They’re hanging in there with us but it can’t go on forever.”

“We need to make a decision this week, that time-frame, or ultimately we’ll be in a position where we cause some problems, technically, with our chassis. We can’t solve our power issue and turn up with a chassis that is not adequate.”

With Mercedes and Ferrari not interested, the Renault deal has emerged as their best bet to improve from their current untenable situation, but clearly there are hurdles to overcome, “We don’t have alignment among all the parties. We want to make sure everything is handled well with Honda, that they stay in the sport either with us or another team.”

“Then you come to the fourth engine rule. The engine manufacturers are not geared up for additional teams at this point. Everyone is trying to work together and we anticipate some decisions this week. I think once the main domino falls, everything else will fall into place.”

The team’s star driver Fernando Alonso was a frustrated man during the race at Monza, ranting at stewards over the penalty applied to Jolyon Palmer during his tussle with the Renault driver – there is a certain irony in that…

Nevertheless it was a tad over the top, from the Spaniard, as he was bickering about 16th place. Both drivers retired before the end of the race.

However, the double Formula 1 World champion has no real options on his plate other than to remain with McLaren, or depart F1 forever.

But Brown is adamant that Alonso will stay with the team beyond 2017, “I think it’s very likely. I seem to have a lot of breakfasts now with Fernando. He loves the team, he’s passionate as ever to drive. He wants to be in Formula 1 and wants us to be more competitive.”

“I wouldn’t rule him out if it remains status quo. With the stuff that are seeing and we will further review this week. I wouldn’t say that it’s a foregone conclusion that if we do stay with Honda he won’t remain with us,” explained Brown.

After the race at Monza, Alonso said, “It is an important week for McLaren to make some decisions. Hopefully we all know something by Singapore. I need to keep looking at what possibilities are for the future and hopefully also make a decision in September.”