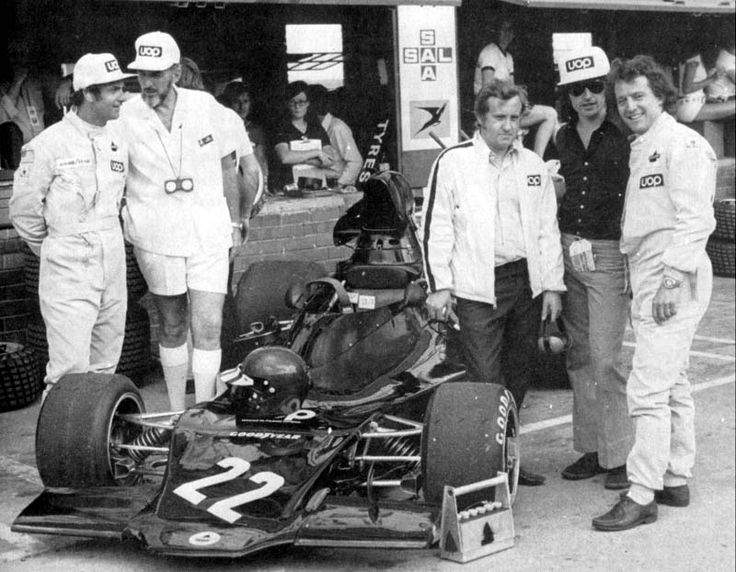 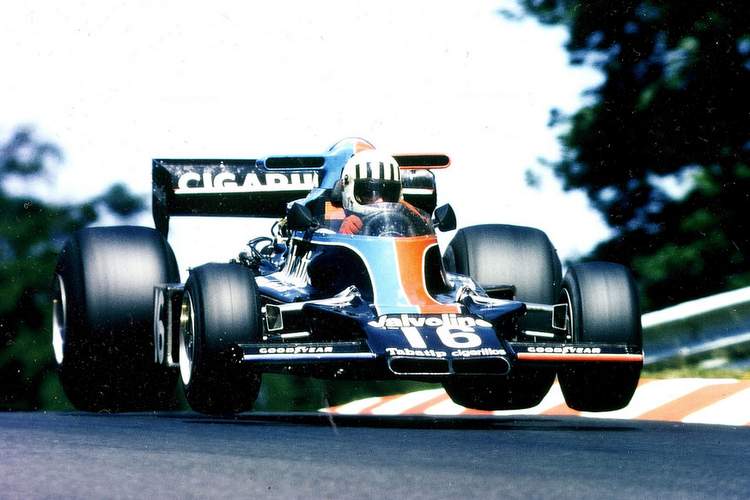 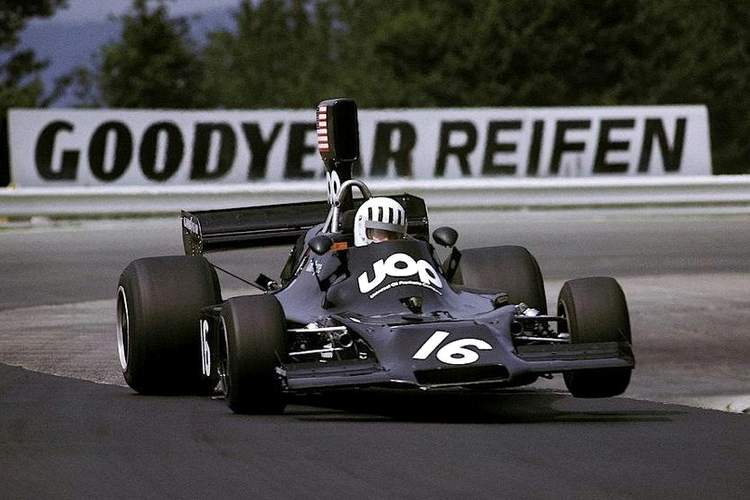 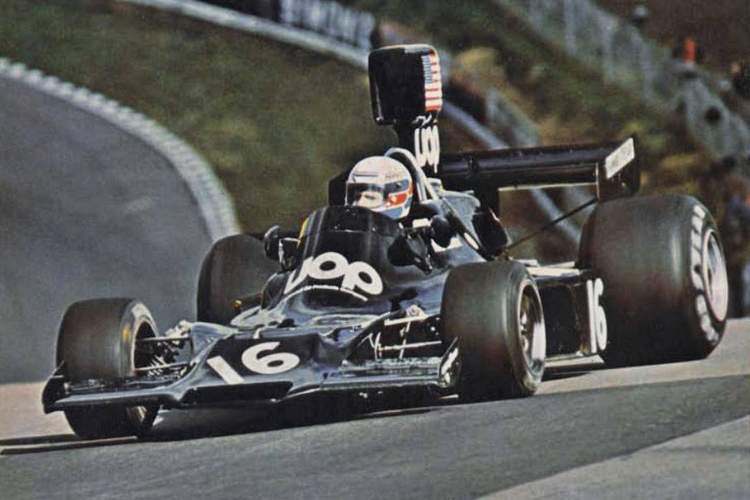 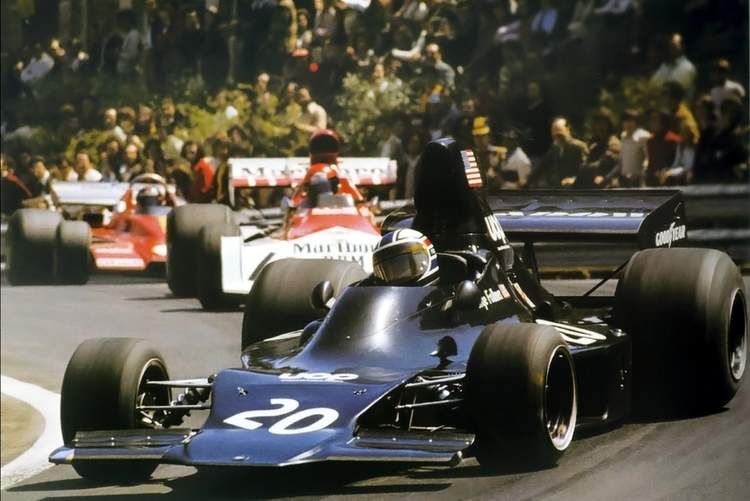 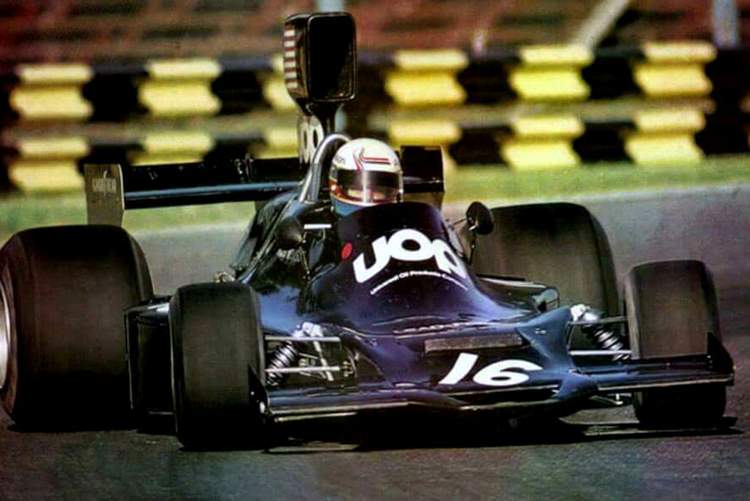 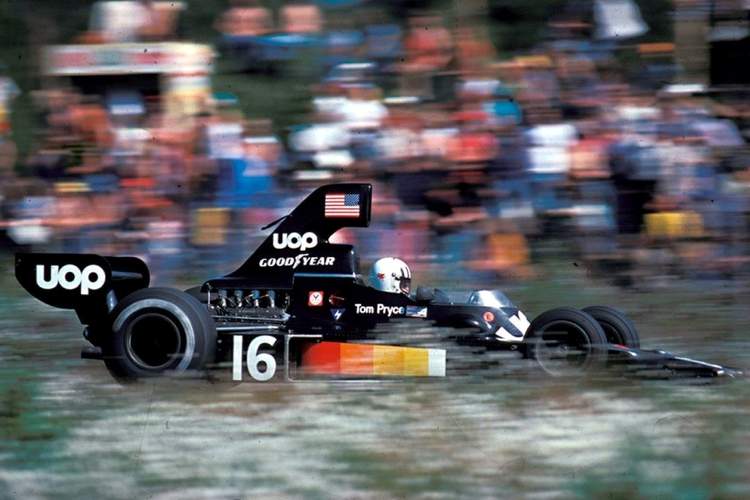 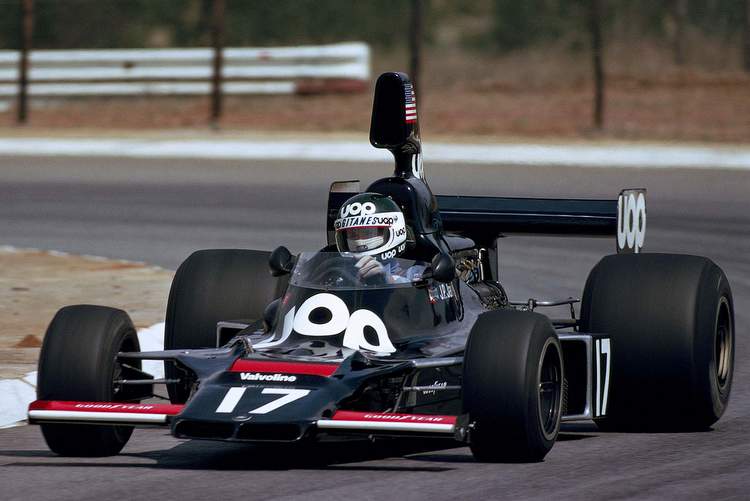 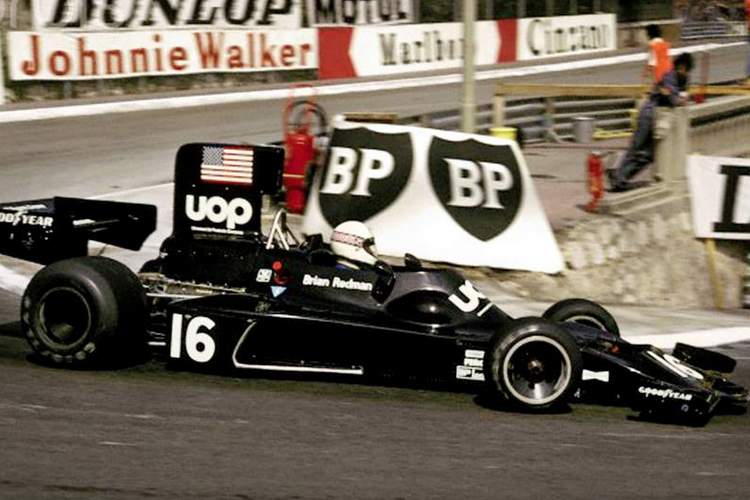 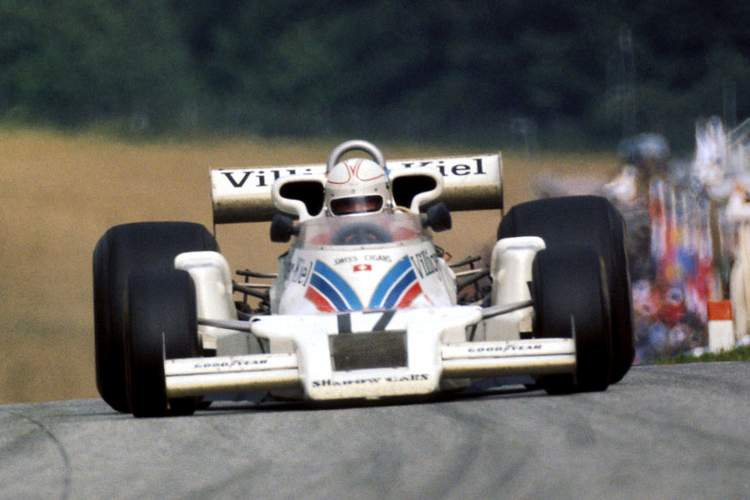 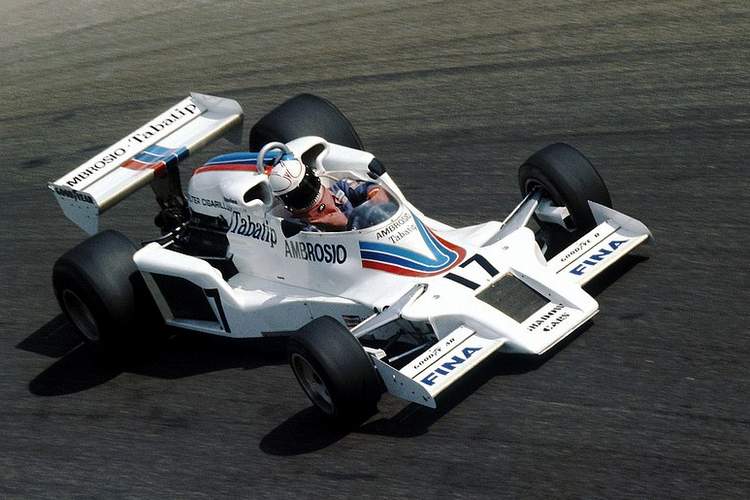 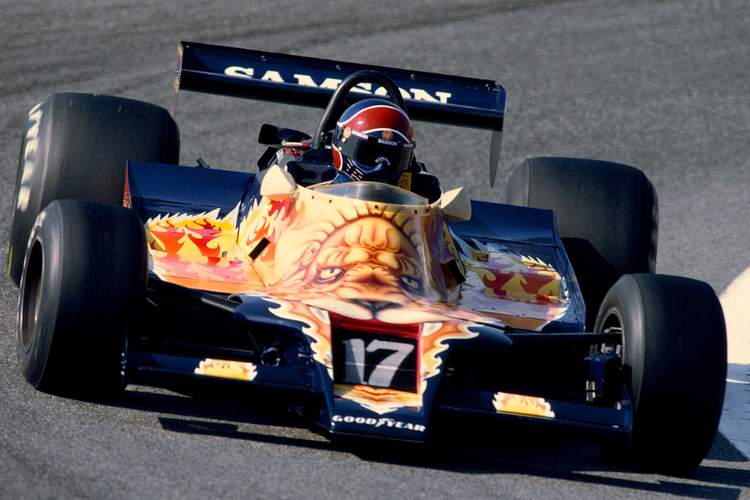 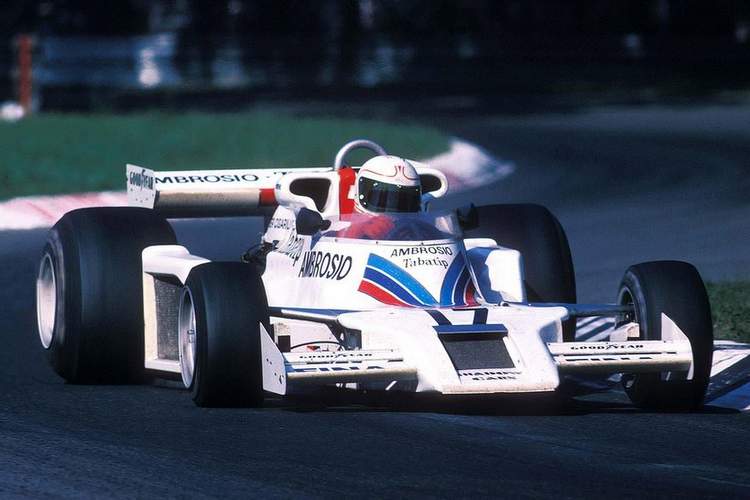 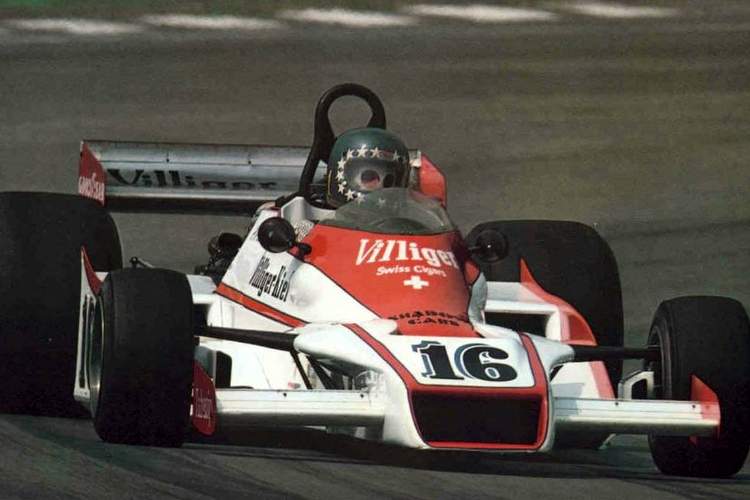 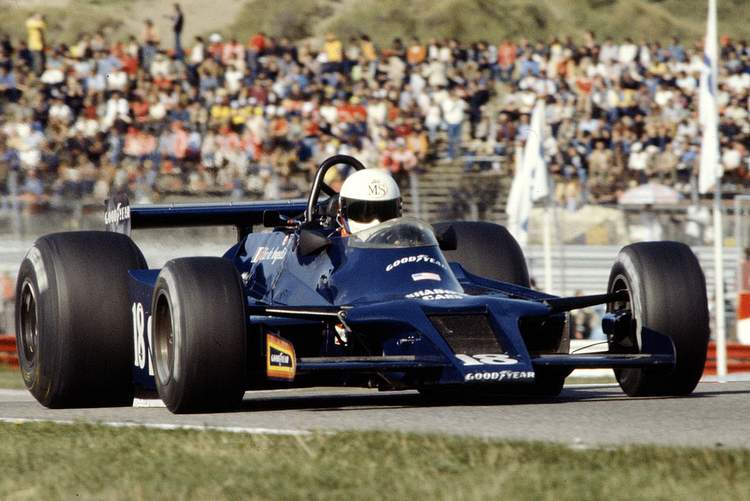 Don Nichols the man who founded and entered the Shadow team in Formula 1 has died.

Nicols is pictured above second from left talking to Peter Revson (left) who was killed shortly after the photo was taken during testing for the 1974 South African Grand Prix.

The Shadow team logo featuring a cloaked spy which epitomised the image he portrayed during his years in motor racing.

A former US army man, Nichols lived in Japan, where he sold tyres and was involved in the development of Mount Fuji’s race circuit.

In 1968, he founded Advanced Vehicle Systems, which evolved into Shadow for Can-Am, where they were very successful and Formula 1, where Nichols became one of the relatively few Americans to see his team win in Formula 1.

Nichols expanded his operation and entered F1 at the start of 1973 with Oliver and George Follmer driving. In 1975 Oliver became the team’s commercial director, but the original sponsor pulled out and could not be adequately replaced.

In 1977 most of the team management walked out of Shadow to join the Arrows team. Nichols sued and won, claiming copyright infringement, and that year Alan Jones scored Shadow’s single Grand Prix victory.

At that point Shadow was in financial decline, however, and in 1981 Nichols sold his assets to the Theodore team of Chinese businessman Teddy Yip.

The team also competed in Formula 5000, winning once in that series. After the Shadow spell, he moved back to the US. He remained involved with Shadow for the rest of his life and attended a large number of historic events, especially one that feature Shadow cars.

Nichols fought on the Normandy beaches on D-Day, as well as serving in Holland, and also survived the Battle of the Bulge.

Although Nichols somewhat relished the shadowy sinister background, but by all accounts in reality he was a generous man and a great racing enthusiast.

The team existed at a time when Formula 1 was at it’s most dangerous with Revson killed, as mentioned above, during a test with the team on 22 March 1974, before the 1974 South African Grand Prix in Kyalami.

Three years later in 1977 Pryce lost his life, also at Kyalami, when he collided at high speed with a track marshal, Frederik Jansen van Vuuren, who crossed the track during the race to tend to the stricken car of Pryce’s Shadow teammate Renzo Zorzi. Both men were killed in the incident.