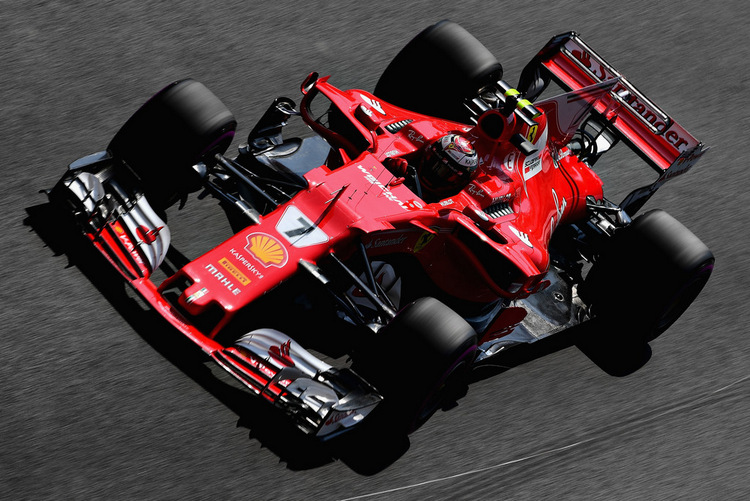 It has been 128 races since Kimi Raikkonen qualified in pole position for a grand prix, that jinx is over as he claimed top spot on the grid for the Monaco Grand Prix in one of his strongest performances in memory.

Raikkonen’s best lap time of 1:12.178 was a mere 0.043 of a second faster than Ferrari teammate Sebastian Vettel, thus guaranteeing an all red front row for the race and a chance to break the win-less streak, on the streets of Monte Carlo, that stretches back to 2001 for the Maranello outfit.

Ferrari have dominated proceedings on the legendary street circuit since FP2 on Thursday, with Vettel leading the way, but on a hot sunny afternoon on the Riviera it was veteran Raikkonen who did the business.

In his trademark, style the Iceman’s reaction to the message from his pitwall, informing him of his feat, was hardly overwhelming, “Oh good, thanks guys.”

But added later in parc ferme,  “It’s great. It definitely wasn’t easy this weekend but we managed to fix the car for qualifying. It’s tricky to go fast around this circuit. It’s the best place to race and we’ll try to make the most of it tomorrow. It’s been difficult to be consistent but the car was great. It was good fun.”

Pole at Monaco was the 2007 F1 world champion’s first since the 2008 French Grand Prix and the 17th of his career. He won the sport’s crown jewel race only once as a McLaren driver in 2005.

It’s a first Ferrari front row lockout in Monaco since 2008 and only the third since 1979. Back then, Jody Scheckter took pole position with Gilles Villeneuve second. Scheckter went on to win the race.

Vettel had topped the timing sheets in the morning session, but when it mattered lacked the firepower to usurp his teammate, “Well done to Kimi. Arguably you can always go a bit faster. The car’s been very good. I don’t know what caused Mercedes trouble but we could improve session by session.”

“It’s one of the highlights of the season. It’s difficult to get everything right but when you do everyone is cheering,” added Vettel.

Valtteri Bottas salvaged some pride for Mercedes, who have been on the back foot since FP2 on Thursday, with a very close third place on the timing screens, an astounding 0.002 of a second shy of Vettel’s effort.”

The Finn, who has never before qualified in the top ten at Monaco, summed up, “It was a really good lap and a really good feeling when you get one here. It is one of the most mentally demanding circuits and I’ve really appreciated all the support from the fans.”

It was a disappointing session for his Silver Arrows teammate Lewis Hamilton who simply could not find the sweet spot on the day and was eliminated in Q2, ending 14th fastest.

The triple F1 world champion explained, “I don’t know, I can’t pinpoint the problem. It’s disappointing. It’s a little bit unfortunate with the yellow flag at the end. That lap may have got me into the top 10 but I think I’d have struggled to be in the top five. Valtteri’s lap shows we’re not terrible here so we need to know what happened.”

Max Verstappen was fastest of the Red Bull and will start the race in fourth and Daniel Ricciardo fifth fastest, which would have been disappointing for the energy drinks duo who were expecting to be in the pole position shoot-out.

Carlos Sainz was again in sublime form as he powered to sixth in the Toro Rosso, the Spaniard making a case for a drive with a big team with each outing. Again outshining his teammate Daniil Kvyat who will start 11th.

‘Local hero’ Romain Grosjean put a troubled free practice behind him to claim eighth spot on the grid for Haas.

Arguably the story of the day was Jenson Button posting the ninth best time on his return to Formula 1 action in place of Indy 500 bound Fernando Alonso, but he will start from the back of the grid due to a 15-place grid penalty due to an engine change.

He reflected, “If I was P9 and hadn’t been away I’d be more disappointed. It’s been a great weekend and I’ve had fun. Q3 I didn’t enjoy so much because I’d been out of the car for 10 minutes and I didn’t know where the limit of the car was.

“I’ve been driving within myself which is a shame but you have to around Monaco so to be P9 I’m very happy. I’ve enjoyed the weekend a lot. It’s my last qualifying session but probably my most enjoyable. ”

“The penalty still hurts, it doesn’t matter how many races you’ve done. They told me yesterday. It’s a shame but it’s never easy. It’s Fernando’s fault,” joked the Briton who won the race in Monte Carlo in 2009.

His rookie teammate Stoffel Vandoorne looked feisty early on with sixth place in Q1, but he slammed the barrier exiting at the swimming pool complex late in Q2. He was tenth fastest.

Last word to Ferrari team chief Maurizio Arrivabene, “I’m really happy for Kimi because he deserves it. The champion is coming out. Sebastian made a mistake in Turn Five but having two cars up there means I’m happy… but we have to remember to be careful after what happened in Sochi.”