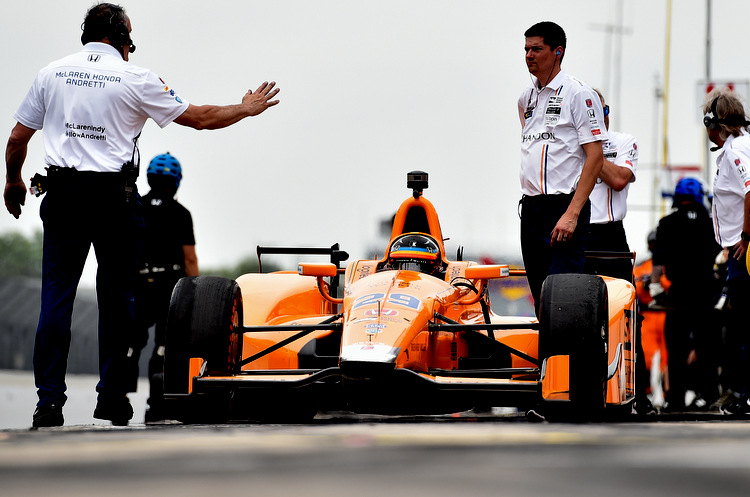 What was widely viewed as a one-off by Spaniard Alonso and his McLaren Formula One team could result in something far more substantial following what has been an upbeat homecoming to IndyCar following a 38-year absence.

With McLaren sputtering along at the back of the F1 grid, the team gave Alonso permission to skip the Monaco Grand Prix to race in the Indianapolis 500 and he has set the motor racing world buzzing by qualifying fifth fastest for Sunday’s showcase.

The excitement has not been lost on Alonso’s McLaren bosses, and Brown in particular who will be the busiest man in motor sport this weekend flying back and forth between Monaco and Indianapolis for two of racing’s biggest events.

“North America is a very important, market for us,” Brown told reporters. “We’re a racing team, but also have other businesses.

“Our criteria for competing outside of Formula One is that it has to be commercially viable, we have to feel we can be competitive, it fits our brand, and it doesn’t detract from our Formula One efforts.

“Indy 500 and IndyCar tick those boxes. It is something that we’re definitely going to discuss and (we) have met with IndyCar, and are certainly interested in competing in some way, shape or form in the not-too-distant future.”

The return of McLaren, the second most successful team after Ferrari in the history of Formula One in terms of wins and titles, to the IndyCar paddock would be a huge boost of prestige to the struggling series that has been dominated by three teams – Penske Racing, Chip Ganassi Racing and Andretti Autosport.

The team have a different hue under American executive Brown while the sport has new American owners in Liberty Media with plans to expand in the United States.

Brown, a former racer who lived and worked in Indianapolis, believes F1’s return to IMS (Indianapolis Motor Speedway) is a no-brainer.

Promoted as “The Racing Capital of the World”, Indianapolis has had a rocky relationship with Formula one.

The United States Grand Prix was run at the Speedway from 2000-2007 until ending its relationship after a dispute with former F1 supremo Bernie Ecclestone over money.

“I think it makes sense for Formula One to be at the world’s greatest racetrack,” said Brown. “I realise it may not have the glamour of some of the other markets that are being spoken about, but it’s here, it’s ready to go.

“I think economically, given that Liberty is taking a different view on some of their future partnerships, I think there is an opportunity there.”

IMS president Doug Boles told Reuters there had been no talks with Liberty about F1 but he would be interested in exploring the idea.

“We would have to figure out the economics of it,” said Boles. “That is why it wasn’t here after 2007 and I think in order for it to come back here the economics have to make sense.”

Big Question: Would an IndyCar programme good for McLaren?