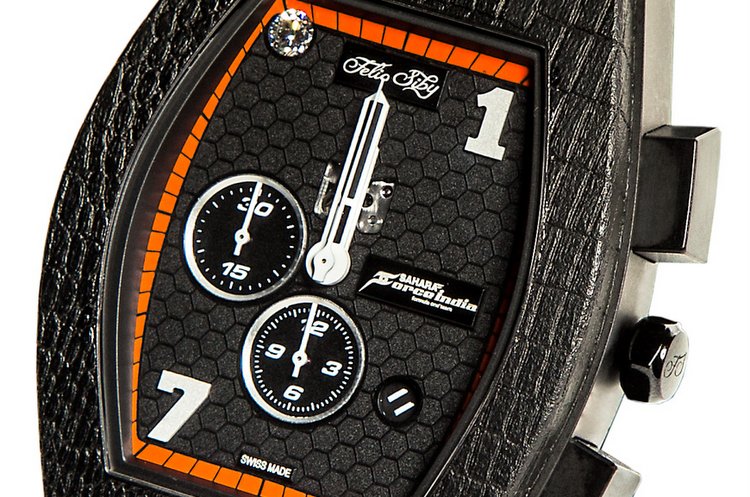 Luxury design house, Felio Siby, the pioneer of ethnic luxury, was at the forefront of Formula One yet again, as Sergio Perez and Esteban Ocon pulled back the covers to reveal the team’s dynamic new look and Sahara Force India VJM10 car during the team’s official launch at Silverstone racetrack on Wednesday, February 22nd.

The Miami based purveyor of luxury apparel and high-end accessories for men and women continues its unique partnership with the renowned UK based F1 race team for a second season – a corporate alliance considered to be the first of its kind in the world of Grand Prix.

Sergio Perez and the team’s new recruit, Esteban Ocon, will both wear the watches trackside and Felio Siby will keep the company logo on the nose of the new VJM10 car.

“I am excited to continue for our second season as the official Lifestyle Partner for Sahara Force India,” says Dominique Siby, Founder and CEO of Felio Siby.

“The 2017 season welcomes an incredible new vehicle, as well as a new driver representing the Sahara Force India Watch by Felio Siby. I’d like to personally welcome Esteban Ocon in to the family and look forward to watching him perform throughout the year as a new force to be reckoned with.”

Team Principal, Dr Vijay Mallya, was the first to praise the VJM10: “I can’t remember being more excited ahead of a new season. The VJM10 looks aggressive and purposeful, and is the result of a huge effort behind the scenes over the last twelve months. We have big hopes for this car, which looks stunning in its new livery.”

Black and orange has been chosen for the Sahara Force India Watch – to reflect the race team’s official colors. The mounted figures 1 and 7, outlines of the two inner circular dials and both hands of the watch itself are all given a distinctive white finish that provide a bold contrast upon the black “Cotes de Geneve” Hexagonal decorative facial engraving, on which the .2-carat diamond is set.

A stylish orange trim is positioned around the outside of the watch face, and a small window to reveal the inner organs of the watch’s Vaucher Manufacture Fleurier Swiss movement can be seen above the center. The Sahara Force India logo is placed in white at the 3 o’clock position, as a stamp of authenticity.

Casing made with black Titanium also features the Felio Siby signature crocodile imprint, and a premium quality black rubber watchstrap reinforces its sporty design. With a self-winding power reserve of 50 hours and weighing only 80 grams, the limited edition Sahara Force India Watch by Felio Siby is priced at $150,000 and is now available by special order through www.feliosiby.com.

As an official race team sponsor, the Felio Siby logo and corporate identity was first seen on the nose of the VJM09 Force India F1 racecar at the Russian Grand Prix in May 2016, prior to the watch being unveiled with the drivers during the Monaco Grand Prix.

Dominique Siby has combined his love for high-class craftsmanship and elegant flair with luxury sports and a global life in the fast lane, to introduce a timepiece series that exemplifies human ingenuity and precision engineering.

Three brand ambassadors are strategically aligned to immortalize the design of three individual watches through excellence in their respective sports. Brand ambassadors for the Felio Siby Watch collection are the top ranked tennis professional from Czechoslovakia, Tomas Berdych; the leading Brazilian Formula One racing driver, Felipe Nasr and the UK based Sahara Force India Formula One team.

Additional Felio Siby product lines are in development for the Sahara Force India F1 team, including a series of travel accessories, as part of the Lifestyle partnership.