Formula 1 still a cash cow with Ecclestone milking it big

Forbes reports new research which reveals revenue generated by Formula 1 has totalled $16.2 billion over the past 15 years outstripping its closest rival the FIFA World Cup of soccer according to new research.

The report adds that the ultimate parent company of F1 is Delta Topco which is based on the offshore island of Jersey. Its biggest shareholder is the private equity firm CVC which has a 35% stake in it.

The second-largest shareholder is American asset management firm Waddell & Reed, which has 20.9%, followed by the estate of bankrupt investment bank Lehman Brothers with 12.3%.

Bambino Holdings, the Ecclestone family trust, owns 8.5% with 5.3% in Ecclestone’s hands and the remainder held by other banks, funds and management. There is a mighty financial engine beating at the heart of the business.

Topco’s revenue comes from six sources. Starting at the bottom, sales of vending and concession stands at tracks brought in $33.9 million in 2013, the latest year for which accounts are available.

Junior series GP2 made a total of $34.1 million from selling cars and parts to its teams whilst F1’s corporate hospitality outfit the Paddock Club had revenue of $87.8 million.

Next up is $259 million from selling trackside advertising at each race and sponsorship of the series. This comes from companies such as parcel delivery service DHL and luxury watch maker Rolex which are both official F1 partners.

The two remaining sources of F1’s revenue are the biggest – fees from hosting and broadcasting races. They each bring in roughly the same amount and in 2013 it came to a combined $1.3 billion.

This gave Topco total revenue of $1.7 billion in 2013 and it is a world away from F1’s performance 15 years earlier. In 1999 the operating company of the series was Formula One Administration and company records show that it had revenue of just $341.5 million.

Interest in the series has exploded since then as car manufacturers piled in and Ecclestone added new races in Asia and the Middle East. It has fuelled F1’s rise to become the world’s most-watched annual sports series and last year it had 425 million television viewers.

Between 1999 and 2013 F1’s revenue came to a total of $16.2 billion which already outstrips FIFA’s even though it does not include the amount for 2014 unlike its rival. Since 1999 F1’s revenue has risen five times compared to a three-fold increase at FIFA.

Much has been attributed to Ecclestone’s hand in the business, when he emerged on the scene in the seventies a time when F1 races ran as ad hoc, almost amateur, events as each team made separate deals with each event promoter and television coverage was patchy since races could be cancelled at the last moment if there were not enough cars to fill the grid. 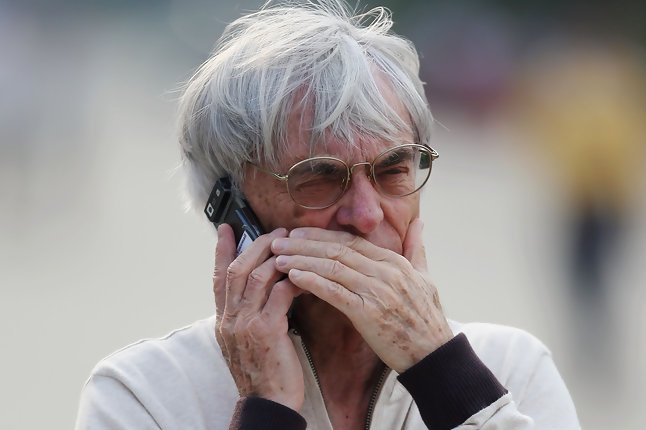 Ecclestone’s masterstroke came in 1981 when he convinced the teams to sign a contract, known as the Concorde Agreement, which committed them to attend every race.

It meant that F1 could offer guaranteed coverage to TV networks and Ecclestone’s company Formula One Promotions and Administration (FOPA) negotiated the deals in return for a share of the proceeds.

In 1995 Ecclestone took a salary of $90 million from FOPA which made him the world’s highest-paid executive. However, at the end of the year he was handed the keys to the billionaire’s club when F1’s governing body, the Fédération Internationale de l’Automobile (FIA), awarded his company the rights to run F1 rather than just broker the deals.

Since then, Ecclestone has built up a fortune of around $4 billion from selling stakes in the sport. He has not just remained in the driving seat but has personally negotiated all of the key deals which have shaped modern-day F1.

Research by the Express newspaper last year revealed that Ecclestone has signed deals worth an estimated $23.4 billion in the 30 years since he took over the helm of F1. It is understood to be more than any other individual in the history of professional sport has raised.

F1’s biggest pay-day is believed to have come from the contract with German broadcaster RTL which was signed by Ecclestone in 1991 and is still in place today making it one of the longest-running television deals in F1. This alone has generated $1.4 billion in revenue.

The second and third largest deals that Ecclestone has ever signed are contracts to host races. The bigger of the two is the contract for the Australian Grand Prix which began in 1985 and has been held at its current home in Melbourne since 1996. Last year the contract was extended until 2020 and it is expected to generate a total of $712 million for F1 over the 24 years of the deal.

It just tips the $674.8 million which F1 is due to receive from the British Grand Prix contract. Ecclestone appointed Britain’s Silverstone track the permanent venue for the race in 1987 and it has a deal to stay there until 2026 making it F1’s longest-running Grand Prix contract.

Last year’s biggest new addition was a Grand Prix in Russia which has an estimated annual price tag of $44 million. Ecclestone negotiated the deal with Russia’s president Vladimir Putin and there is good reason for this.

Most global sports have senior managers who are each responsible for securing and signing new deals in sectors such as sponsorship, television and corporate hospitality. F1 is the exception.

Ecclestone is directly in charge of bringing in new business across all of F1’s major revenue streams. The sport has no chief marketing officer, no press officer and not even a deputy chief executive or successor for its 84 year-old boss.

He says he has no intention of retiring and whilst he is delivering these kind of results it is little surprise that CVC too doesn’t want him to give up the wheel, concludes the Forbes report.