FIA clamps down on political statements from F1 drivers 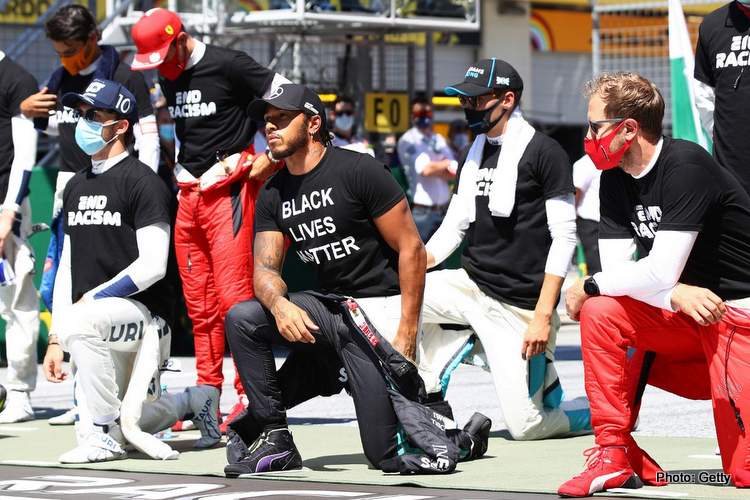 The FIA has moved to clamp down on Formula 1 drivers attempting to make political statements at grands prix without prior approval, with a new article in the International Sporting Code (ISC).

It has become a habit for many F1 drivers in recent seasons to express their opinion regarding certain political and social matters over grand prix weekends starting with the Black Lives Matter, LGBTQ+ rights, human rights issues in some countries the sports visits, in addition to statements regarding the global climate crisis.

Seven-time F1 Champion Lewis Hamilton and now retired quadruple Champion Sebastian Vettel have been the most high-profile advocates of such topics on the grid.

However the FIA has added a new article to the ISC banning any political statements without prior approval from the governing body or the relevant local authorities were races are taking place.

The new article specified what constitutes breach of rules; it states: “The general making and display of political, religious and personal statements or comments notably in violation of the general principle of neutrality promoted by the FIA under its Statutes, unless previously approved in writing by the FIA for International Competitions, or by the relevant ASN for National Competitions within their jurisdiction.”

The FIA also added some regulations regarding the administration of podium celebrations, stating that constituting a breach of rules and a cause for penalty is: “Failure to comply with the instructions of the FIA regarding the appointment and participation of persons during official ceremonies at any Competition counting towards a FIA Championship.”

The FIA’s move comes after the decision by the FIFA at the 2022 World Cup hosted by Qatar, where teams and their players were not allowed to express any opinions regarding LGBTQ+ rights during the tournament at the risk of incurring sporting penalties.