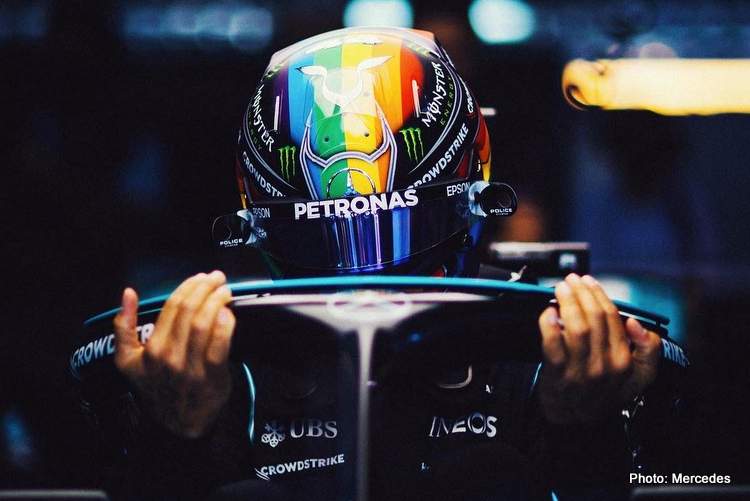 Seven-times Formula 1 world champion Lewis Hamilton wore a rainbow-liveried helmet on the first day of Qatar Grand Prix practice, after speaking out a day earlier about equal rights and increasing scrutiny on some of the countries the sport visited.

Gay sex is punishable by jail in Qatar, as in many Muslim-majority countries.

The conservative Gulf Arab state is hosting a Formula 1 grand prix for the first time this weekend and has signed a 10-year contract from 2023.

Hamilton’s helmet featured the words “We Stand Together” on the back.

In July Hamilton spoke out against Hungary’s anti-LGBTQ+ legislation ahead of the country’s grand prix and urged voters to protect rights by rejecting it in a coming referendum.

The sport’s most successful driver of all time, with a record 101 wins, has used his platform to promote diversity and campaign for human rights.

We applaud @LewisHamilton for adding the rainbow flag to his helmet for this weekend’s #QatarGP. It is a magnificent and powerful gesture of solidarity with our #LGBTQ+ community around the world and is very much appreciated. Thank you, Lewis. #F1 @MercedesAMGF1

The title contender told reporters at the Losail circuit on Thursday that while it was not up to the drivers where they raced, he was aware of the situation.

“I do feel that there are issues in these places that we are going to, as there are around the world, but of course (this) seems to be deemed as one of the worst in this part of the world,” explained Hamilton.

“I do think as these sports go to these places they are duty-bound to raise awareness for these issues and these places need scrutiny and need the media to speak about these things. Equal rights is a serious issue.

“However I am aware that in this place they are trying to make steps and it can’t change overnight.”

Qatar, preparing to host the 2022 soccer World Cup, has come under particular fire for labour conditions and the treatment of migrant workers.

A 48-page report by Amnesty, ‘Reality Check 2021’, this week said that practices such as withholding salaries and charging workers to change jobs was still rife, despite labour reforms in 2014.

The final two races of the Formula One season are in Saudi Arabia and Abu Dhabi. Bahrain also hosted a race earlier in the year.

Richard Morris, a British racing driver and co-founder of Racing Pride and told the PA news agency that the gesture “fills me with hope”.

He said: “It is an incredible act of allyship from Lewis to show solidarity with the LGBTQ+ community in the context of Formula One visiting a region in which LGBTQ+ people face discrimination and challenges to their human rights.

“It is a demonstration of the capacity the sport has to use its platform positively to promote values of inclusion around the world.

“When I was growing up and getting into motorsport there weren’t any LGBTQ+ out drivers for me to look up to, and nobody in the sport was discussing or showing support for LGBTQ+ inclusion.

“So it fills me with hope that we are now seeing drivers like Lewis Hamilton and Sebastian Vettel be active champions for inclusion. There’s a lot more work to be done in the sport, but we are starting to move in the right direction,” added Morris. (Main Report by Alan Baldwin)