Inside Line: Our Twitter journey. If it ain’t broken…

Let’s start with what might’ve been the moral of the story summing up our grandprix247.com Twitter journey thus far: “If it ain’t broken, don’t fix it!” But, there’s a twist in the end which defies that headline.

It began one day in the past months, blurred by so much while doing some ‘housekeeping’ on our social media platforms; arriving at the Twitter admin side I noticed that my date of birth (very old) was the date attributed to the account, like a Twat [do not edit this out Jad] I changed it to ’01 January 2009′ which is the date of when this project was born.

Boom! Blocked because the Algorithm (rulers of the modern world) deemed me to be a minor. Flung me a link to verify my parents were aware of this (!) and upload proof of age, blah blah blah. Bullshit stuff that does not work but gathers your ID without response in the delusion that the account is being restored!

Here is where we stand. 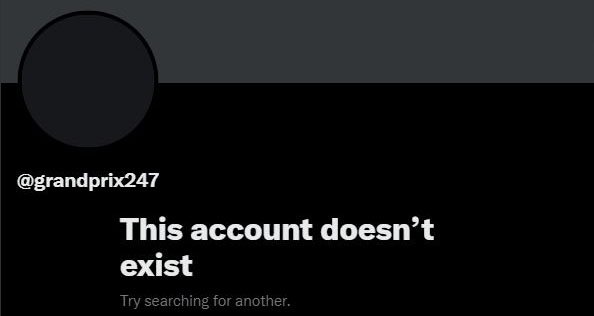 So there is an example of how stupid I was and also how thick as a brick the Algorithm is, despite getting my ID and even a note explaining the above dilemma through there, the Twat is on holiday or simply stupider than I.

But honestly, unlike our Facebook hack that severely impacted our referral traffic, I was hardly perturbed after chatting to Jad we monitored the traffic, and not a blip after the Twits blocked us – in fact, our traffic has been surprisingly higher than normal at this time of the year.

My exact words to Jad were simple: “F@ck Twitter. We think about it next year…”

But because we are small and have no need for red tape and Noddies giving their go-ahead, we tapped up Duurt of #MsportXtra our partner for years on Twitter, who runs a tight network of real motorsport enthusiasts and turned it into a potent reaching community of REAL followers, not Bots (like the majority of F1 team followers, or anarchists, or trolls as he has zero tolerance for #digitalmaggots).

The agreement is simple #MsportXtra, Tweets our unique reports and columns (aka Tech Talk, Red Mist, Parc Ferme, Inside Line, TeamTalk, Editor’s Desk, TakeAways, Question Mark etc), and the news we come up with first or has a different angle on. It’s his call, he cherry-picks as he does with all his personally curated news sources. No algorithms here.

Which suits us fine. We can focus on our content and not peddle it like paupers to the masses who only spit on you with spite when you think out of the box, or go where others fear to tread – which we often do.

Personally, I felt cheap after an hour or so on a post, and then going to ‘share’ it with ‘friends’ on Twitter and more so now as you know it is mere fodder for the trolls and haters. It’s horrible as any social media manager will tell you. It’s time to rid the number of followers, so many fakes, and focus on the quality followers which Algorithms struggle to differentiate upon.

Hence the success and the template of future social media could well be partnerships such as this, where serious and acclaimed Twitter accounts such as #MsportXtra are used as a springboard into a real community who then share on merit, most importantly, organically, as opposed to artificially inseminated with fake or abusive/hateful #digitalmaggots.

Make no mistake, we had fun on Twitter when it was a fun place until politics invaded, then COVID-19 established it as the slums were vultures of anger nest, which is what we have today.

Motorsport legend Mario Andretti, who won the first Grand Prix I remember attending – 1971 South Africa at Kyalami – with my Grandfather, the petrolhead, race and rally driver whose racing blood I inherited. And never missed one thereafter, and went to every National after that. We saw a lot of racing together, sitting on concrete stands chomping sandwiches and braaiing.

I digress, Mario was in the house:

Of course, you groove on that. The King agrees because its the truth. No agenda here. We all know its true. Then of course another awful truth caused a different reaction. As talented and likable as Antonio Giovinazzi is, he was just not cut out for F1, we knew it after a handful of races and said as much. 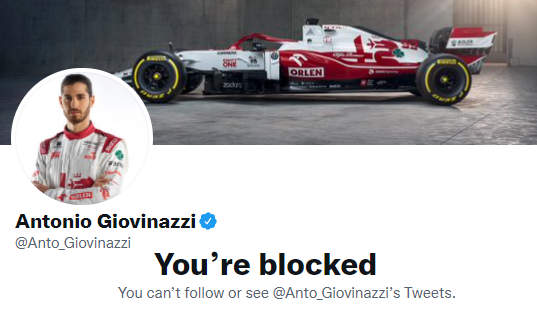 I get it that Gio was pissed and I probably would’ve done the same thing, but we were real, not a Bot or Algorithm, and more so we were right and did not need 62 F1 starts to figure that out, while Ferrari did.

And recently when he got a chance again recently, he binned the Haas. How many Karmic messages does the guy want? We were right. Again, I grooved on this block. There were more we neglected to screengrab.

And finally, happy to say that real F1 teams followed us. But that’s it. None of that sent much traffic to our First Prize: grandprix247.com

So, let someone else do the talking for us if they feel what we produce is worthy, helping us focus on the news and content side which is where our strengths lie.

Is Twitter gone for us forever? In its current cesspool guise certainly, half the profiles are fake or one-day-wonders to spew hate etc etc etc.

I am guessing, Elon Musk knows his stuff, if social media giants put a paywall or ramp up verification (bank style) to keep out the rabble things will change. The quantity of followers means nothing, in fact, it is bad, bad news for accounts that are inflated by fake followers, time is now when quantity has to be chopped down in favor of quality.

I hope the same happens with Facebook, which has changed dramatically with a venomous belly swelling alarmingly. This has led to big clampdowns on our side, with weekly mass bannings of fake or abusive accounts. Polluted by unwanted posts on timelines that once gave a window into your selected friends’ lives, but now a portal to sell you cr@p, send you to the highest bidder.

If Mark Zuckerberg does not clean up shop fast, Meta or whatever they call FB these days is going to become irrelevant, even crash one hopes, as fast it is approaching levels of unacceptability toxicity that Twitter is swamped with. A shame because it all started so differently.

Everyone knows that things must change, we are united with Max Verstappen, Lewis Hamilton, Lando Norris and all those in F1 who call for Twitter, Facebook, Instagram and TikTok to do the right thing: Verify real users, to block the rest, to really strike at the heart of the cancer of #digitalmaggots.

So, as mentioned in the opening para,  the moral of this story is not “If it ain’t broken, don’t fix it!” but I am confident it is, “It was broken, and we are fixing it.” Thank you #MsportXtra, let’s see how this part of the social media journey goes.

#Motorsport Since it has become a bit less busy at @MsportXtra HQ, I’ve expanded a partnership with #GP247 . More on this very soon. #MsportXtra pic.twitter.com/KIwGz26Mte