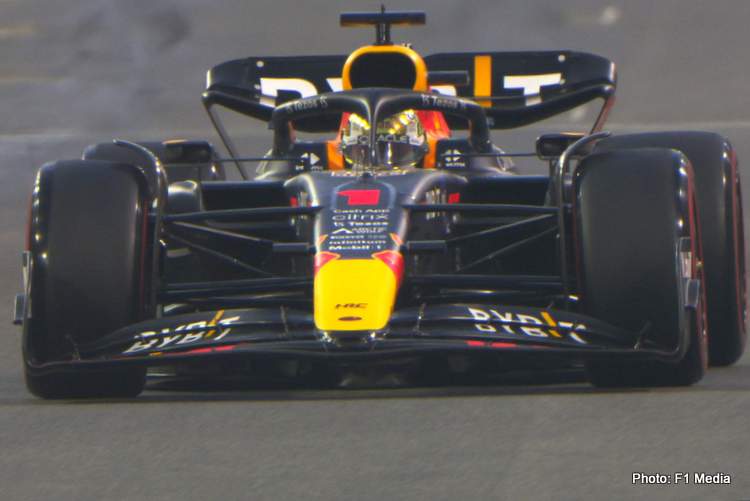 Max Verstappen was back in the car in FP2, and was immediately in the groove, going fastest of all by over three tenths from second-placed George Russell.

However Verstappen was immediately on the pace, finishing the session fastest of all despite complaining earlier from brake pedal problems.

George Russell confirmed Mercedes’ good form in Abu Dhabi and was second fastest behind the Dutchman, as Charles Leclerc completed the top three in the Ferrari.

However it seems that Ferrari are suffering on their long runs compared to the Red Bulls and Mercedes.

Mercedes went fastest in FP1, Lewis Hamilton leading George Russell, and while that result is not conclusive of their pace in Abu Dhabi, it’s a good sign that they are in a good place.

With all the young drivers having their 15 minutes of fame in the first practice sessions, all teams where back with their usual driver lineups in FP2, as the serious work of setting up the cars and evaluating the tyres began.

FP2 will take place in the afternoon, similar to Qualifying and the Race which means track and ambient conditions will be very similar which will provide the teams with a good idea on how the tyres will work, and will present us with a glimpse of who’s fast and who’s not.

Most of the drivers set out on the Medium tyres at the start of FP2, except for Kevin Magnussen, Yuki Tsunoda, Lando Norris, and Valtteri Bottas who were on the Hards.

Lewis Hamilton and Kevin Magnussen had a close call at Turn 6, 15 minutes into the session, the Briton on a fast lap, the Dane on a slow one and apparently unaware of the Mercedes drivers approaching.

Traffic troubles for Lewis at Turn 6, who gets stuck behind K-Mag#AbuDhabiGP #F1 pic.twitter.com/OHpfC9bArM

Almost twenty minutes into the session, Max Verstappen bolted a set of Soft tyres on his RB18 and went fastest of all, but soon after reported a problem with his brake pedal. “My brake pedal is very bad,” he radioed his team.

Soon after that, other drivers followed suit and started sampling the Soft tyres as well with qualifying simulations.

A few minutes after the halfway mark, Sebastian Vettel brought out a brief Yellow Flag, as he locked up heavily going into Turn 13, ending up in the run-off area with no damage done.

With twenty minutes remaining from the session, the sun sets over the Yas Marina Circuit, and the flood lights were turned on.

The sun is setting, the floodlights are on 💡

20 mins of the session to go! 🤩#AbuDhabiGP #F1 pic.twitter.com/eEnaJY7du7

Towards the final 15 minutes of the session, the Medium tyres were back on the cars, as the teams set out to do some race simulations on high fuel, followed by the same runs on Softs.

The times showed that Ferrari was lagging behind Red Bull and Mercedes on the long runs, as the team seemed to be suffering from high tyre degradation, the team’s chronic problem this season.

Leclerc asked his team: “Why am I slow?”, the team responding: “Our pace is not great”.

Carlos Sainz had a worrying moment as he thought his tyre ran over one of his mechanics’ hand, and radioed his team to check, the team confirming all was good.

At the end of the session, the drivers head to the start/finish line to do some practices starts.

Max Verstappen went around the Yas Marina Circuit with a 1:25.146, fastest of all and 0.341s fastest than George Russell who was second fastest.

Charles Leclerc was third fastest in the Ferrari, 0.453s off the pace as Lewis Hamilton was fourth fastest in the other Mercedes, a further 0.162s behind the Monegasque.

Sergio Perez was fifth fastest in the #11 RB18, 0.706s off the pace of his session-leading teammate, with Carlos Sainz sixth fastest for Ferrari, 0.080s behind the Mexican.

Esteban Ocon, the fastest of the Alpine pair was seventh fastest with a 1:26.038, chased by teammate Fernando Alonso, 0.005s behind in eighth.

Daniel Ricciardo was ninth fastest in the McLaren, 0.978s down from the top of the timesheets, as Valtteri Bottas was the last of the top ten drivers, 0.876s behind the Australian. 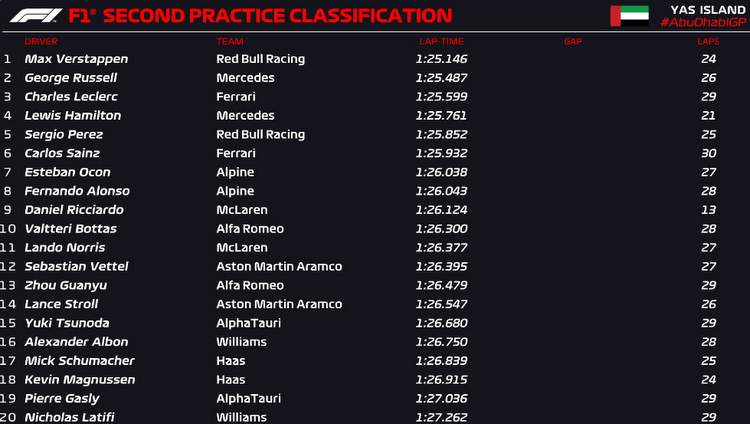