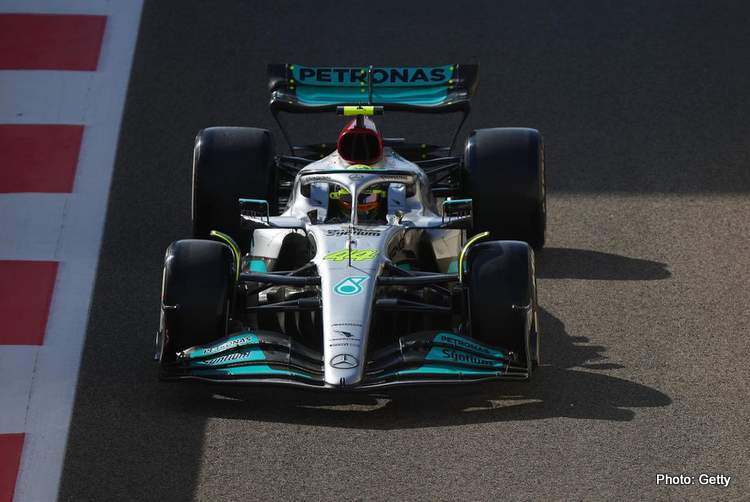 It would be too soon to judge whether Mercedes will be fighting for the win in Abu Dhabi, but their strong showing in FP1 suggests that they should at least be in decent form.

With many teams running young drivers instead of their regulars during FP1, and the fact that the conditions – ambient temperatures and track temperatures – are not similar to those of qualifying and the race, means that we have to wait for FP2 to get a clearer picture of the relative performances.

In FP2 there will be more emphasis on tyre work, and they will behave over long and short runs with the teams starting to make decisions on tyre strategies.

Hamilton was fastest, while Russell was second fastest behind him, as Charles Leclerc took the third spot in the Ferrari.

Hamilton sets the pace, with Russell and Leclerc just behind him #AbuDhabiGP #F1 pic.twitter.com/3WhrMEXr7t

Abu Dhabi will not enjoying the same anticipation it did back in 2021, when Max Verstappen and Lewis Hamilton – Formula 1 Championship rivals at that time – arrived at Yas Marina Circuit equal on points.

From that point of view, the 2022 season finale will be much more less interesting, unless of course you care whether it’s Charles Leclerc or Sergio Perez that secure the runner up in the Drivers’ Championship, which also applies to Mercedes and Ferrari as second in the Constructors’ Championship is still to be claimed.

Off track through there are some interesting stuff, as Haas finally announcing Mick Schumacher’s exit and Nico Hulkenberg’s return.

There is the Mattia Binotti exit reports which Ferrari denied, as well as the Red Bull team orders controversy that is still a talking point from Brazil, after Verstappen refused to give his sixth place to teammate Sergio Perez.

Most importantly though is that this weekend, we say good bye to Sebastian Vettel, the quadruple Champion retiring from the sport after 299 grands prix in top flight.

Seb is here with his Dad 😊

His final FP1 session is coming up… #AbuDhabiGP #F1 pic.twitter.com/kkW48CgeR4

Daniel Ricciardo is also leaving McLaren to nowhere, but despite him insisting he will be back, chances are we might be witnessing the Honey Badger’s final F1 weekend.

Both are great drivers and both will be missed.

It is worth mentioning that FP1 will not give a clear indicator of the pecking order this weekend, as qualifying and the race will be running in similar times to FP2, when conditions will be more representatives.

On the tyres’ front, Pirelli have went to the softer side of their range, bringing their C3 (Hard), C4 (Medium), and C5 (Soft) compounds to Yas Marina Circuit.

The @F1 teams will be gearing up soon for the last Friday practice of the season, and so will we! For the final time in 2022, these are the #Fit4F1 compounds in action this weekend 🇦🇪#F1 #AbuDhabiGP #Formula1 #Pirelli #Pirelli150 pic.twitter.com/XrXDXnTEht

Pietro Fittipaldi is on driving duty at Haas instead of Mick Schumacher, while Lance Stroll made way for 2022 Formula 2 Champion, Felipe Drugovich at Aston Martin.

Our F2 world champion is getting his first taste of an F1 weekend 👊#AbuDhabiGP #F1 pic.twitter.com/CvHj0UXLyx

Jack Doohan took over Fernando Alonso Alpine, while Rober Kubica was in the Alfa Romeo of Zhou Guanyu, where at Williams Logan Sargeant was back in the FW44 accumulating those Super-License points, Nicholas Latifi making way for him.

Patricio O’ward was driving the McLaren of Lando Norris, the young driver suffering a gearbox problem on his first outlap in the session, the team asking him to pit.

He’s in for Lando Norris, but there’s something wrong with the car and he is now limping back to the pits #AbuDhabiGP #F1 pic.twitter.com/0q6AJbhB9D

O’ward was back on track over 20 minutes later, McLaren having sorted out the problem.

Lawson had a bit of an embarrassing moment in the Red Bull, as he missed his pit box, requiring a push from the mechanics.

“Can we push? Sorry, I’m used to driving further down” 📻

Liam Lawson who’s in for Max Verstappen, forgets that he needs to pit at the Red Bull garage for this session 🫣#AbuDhabiGP #F1 pic.twitter.com/0bWTaRTK2D

Halfway through the session, Logan Sargeant had a huge moment at Turn one, spinning and ending up in the barriers nose first.

The American was able to reverse out of the barriers and was back on track, no visible damage on his car. However he brought out a brief Yellow Flag.

There’s a spin for Logan Sargeant at Turn 1

He just managed to avoid the barriers and is back on track#AbuDhabiGP #F1 pic.twitter.com/xOjL8DWlhg

Earlier in the session, Jack Doohan in the Alpine reported an over heating engine, the team asking him to immediately shut it down.

TV replays showed the Red Bull mechanics fixing some bodywork on Liam Lawson’s car, must have broken it over some kerb.

Other than that, it was straight forward session with no drama, but the emphasis will be on FP2 later today, which will be more representative of the pecking order.

Lewis Hamilton put in a 1:26.633 to go fastest around the Yas Marina Circuit for the first practice session, 0.220s ahead of teammate George Russell, second fastest.

Sebastian Vettel started his final F1 weekend strongly, sixth fastest for Aston Martin, 0.635s off the pace, as Robet Shwartzman, driving for Ferrari instead of Carlos Sainz, was seventh fastest, 0.161s behind the German.

In eighth was Daniel Ricciardo for McLaren, 0.986s down from the top of the timesheets, while Valtteri Bottas was ninth fastest in the Alfa Romeo, 0.036s behind the Finn.

Alex Albon rounded off the top ten for Williams with a 1:27.840, 1.207s slower than Hamilton’s session topping time. 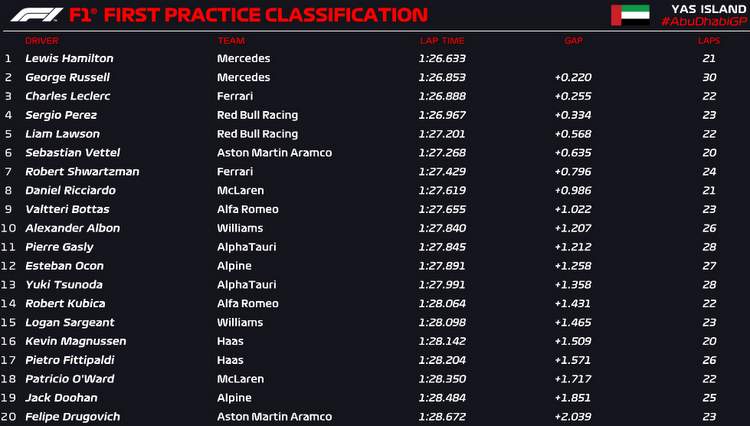