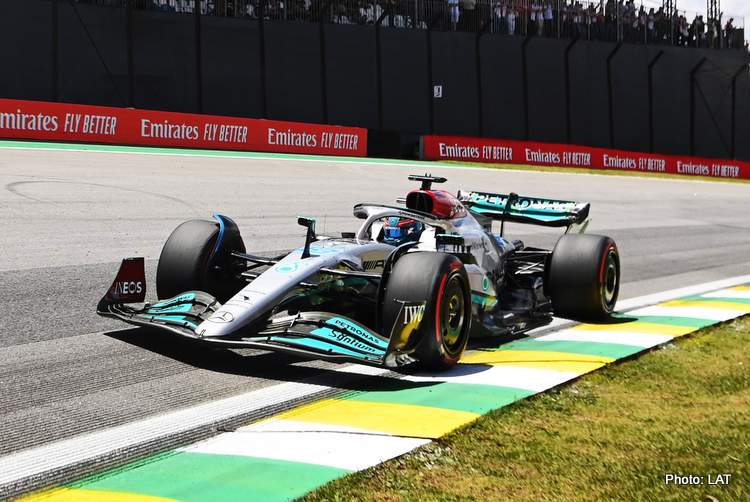 Kevin Magnussen’s dream was over within a few laps of the start as he was overtaken by Verstappen and Russell, who went on to make good use of his Soft tyres to beat the #1 Red Bull wrongly put on the Mediums.

Carlos Sainz finished third and was followed by Lewis Hamilton in fourth, but with the Spaniard’s engine penalty, the grand prix on Sunday will feature a Mercedes front row lock out, a scene we haven’t seen for some time.

Verstappen ultimately finished the Sprint fourth suffering massively from his team’s decision to go for the Yellow-banded tyres. Sergio Perez was fifth behind his teammate.

Charles Leclerc could not make it higher than sixth having started from tenth, and was followed by Lando Norris in seventh, the Briton dropping from a fourth-place start.

Friday’s hero, Kevin Magnussen, was hit with a reality check and finished in the final point-scoring position, eighth having started from pole, but the Dane will always have that special moment in qualifying to remember.

Sebastian Vettel survived some questionable defending tactics from teammate Lance Stroll to finish the Sprint ninth, an improvement but not points to reward his efforts.

Update: Lewis Hamilton is under investigation by the stewards for possible start procedure infringement. The Mercedes driver was cleared of any wrongdoing and kept his third place finish.

What the top three said after the Sprint 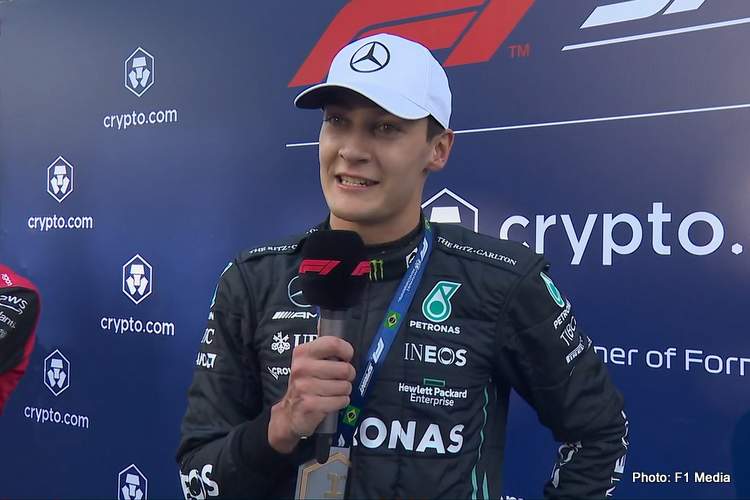 Russell who will start the Sunday grand prix from the top spot was elated after his result; he said: “It was incredible.

“We weren’t expecting to have that much pace, but it goes to show all the hard work we are putting in and the progress we as a team have made.

“These last three races since Austin, the car has been feeling great and it is difficult to know how Max would have got on if he had been on the soft tyres.

“Nevertheless, standing here is a great feeling,” he went on. “It is difficult isn’t it because this is a Sprint, so you have to manage risk and reward.

“Even though I was dying to get that victory, I didn’t want to risk it too much and have no points starting at the back. We made it stick and third time lucky. It is crazy to think we are both starting on the front row and Lewis did a great job coming from P8 so it is exciting.

“I am sure Max is going to be flying tomorrow coming through the pack, but we are in a luxury position for tomorrow and can maybe split the strategy and go for the win,” the Briton concluded.

Second-placed Carlos Sainz spoke of his fight with Verstappen, that ended with contact costing the latter a front wing endplate.

“It was tight into turn one,” he said. “You really need to go for it under braking or you don’t pass them because they are so quick on the straight. That’s racing and you need to go for it if you want to make it stick.

“We have decent pace this weekend, but it’s just the Mercs,” Sainz added. “They have a little bit more pace. It will be interesting to see what happens when we all try the mediums.

“Obviously, we will need to pass them on track because I’m starting P7,” the Ferrari driver concluded referring to his five-place grid penalty.

P2 in the sprint for @Carlossainz55 🌶️

Russell’s teammate, Hamilton who finished third and will inherit second from Carlos Sainz after the Spaniard serves his penalty was super happy with the result.

“Mega job, guys, Mega” he said over the team radio. “Congrats to George.”

“With Sainz’s penalty, that should put us as a Mercedes front row,” the team reported back.

Later in the post Sprint Interviews, Hamilton added: “I am so, so happy to be here, it has been an incredible week. Difficult day yesterday but what a crowd we have had today. Starting from 8th and making my way slowly but congratulations to George.

“This just goes back to everyone back at the factory, everyone working here on the ground who have been working so hard this year, this is an amazing result,” the seven-time Champion added. “To be on the front row tomorrow is incredible.

“From there, we should be able to work as a team and hopefully hold off the guys behind. We are going to try as hard as we can. If we can get some good degradation tomorrow and some good weather, we could have a good fight on our hands.

“A win here for Brazil would be incredible,” the honourary Brazilian citizen concluded.

How the Sprint unraveled 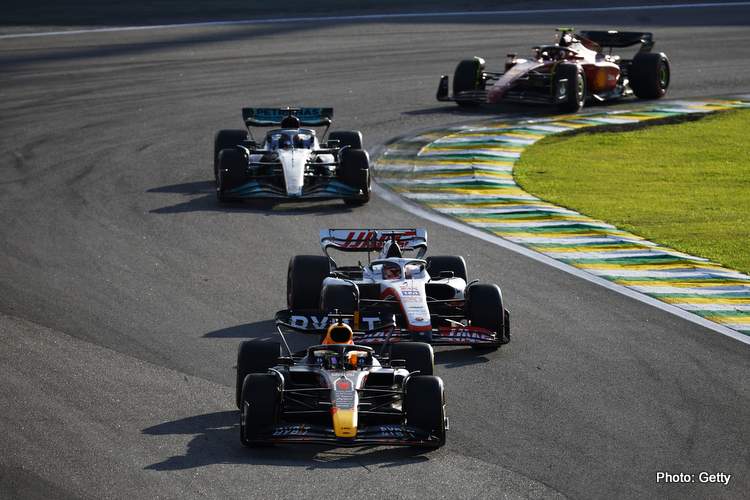 After all the experimenting with the tyres in FP2 earlier, all the teams opted to start their drivers on the Soft tyre except Max Verstappen and Nicholas Latifi.

Kevin Magnussen had a clean start while Verstappen on the Mediums was busy fending off George Russell in the Mercedes the Dutchman keeping his second place.

But Russell went on with his attack on the double F1 Champion trying to make use of his Soft tyres before the latter’s Mediums enter their operating temperature.

Verstappen, however, had other plans and by Lap 3 he dispatched Magnussen and took the lead of the race, as Russell overtook the Dane on the following lap and set off chasing the #1 Red Bull.

Buy Lap 5 the dream was over for Haas and Magnussen as the polesitter lost another position Carlos Sainz and was under attack from Lewis Hamilton who was made up places from his eighth place start.

Going back to Lap 1, it was not without drama, for the Alpine camp that is, as Fernando Alonso and Esteban Ocon got tangled up together, the Spaniard going wide at Turn 4 trying to overtake his teammate on the outside, losing control of his car and making contact.

ALO 📻: “Just lost the front wing. Thanks to our friend”

“I lost the front wing, thanks to our friend,” reported Alonso. “He pushed me in Turn 4 and then finally in the straight. Well done.”

Alonso had to make a visit to the pits for a new front wing and emerged dead last, but that was not the only intrateam drama.

On Lap 9, and Sebastian Vettel was trying to overtake teammate out of the final corner and onto the start/finish line, Lance Stroll had another brain fade – yes we still remember what he did in Austin – pushing the German off the track and on the grass, the latter barely keeping it together.

Seb’s not happy with Stroll after a close call between the two team mates 😳#F1Sprint #BrazilGP pic.twitter.com/ySKlBXUOid

Vettel overtook Stroll in the second attempt, the latter receiving a ten-second penalty for his shenanigans.

By Lap 12, Russell became within DRS zone behind Verstappen and launched an attack out of Turn 1, but the Dutchman proved to be tough to pass, placing his car perfectly on track entering into Turn 4 and keeping his lead.

GEORGE TRIES TO MOVE PAST MAX!!!

Verstappen got a breather from Alex Albon who parked his Williams at Turn 2 bringing out the Yellow Flag, but that did not last long as Russell took the lead by Lap 15 and went on to increase his lead out of DRS risk.

Behind the top two a fight was brewing between Carlos Sainz in third and Lewis Hamilton in fourth. Charles Leclerc and Sergio Perez were fifth and sixth respectively.

By Lap 19, Verstappen lost another position to Sainz the Red Bull losing the front wing end plate after contact with the Ferrari in Turn 1, and soon Hamilton was up Verstappen’s gearbox, and overtaking him by lap 20.

The Medium tyres evidently were not the right choice by Red Bull, meaning their ace had to settle for fourth.

The ailing Red Bull of Verstappen falls down to P4, Hamilton moves into the Top 3! 👏#F1Sprint #BrazilGP pic.twitter.com/qUuf9PrWNE 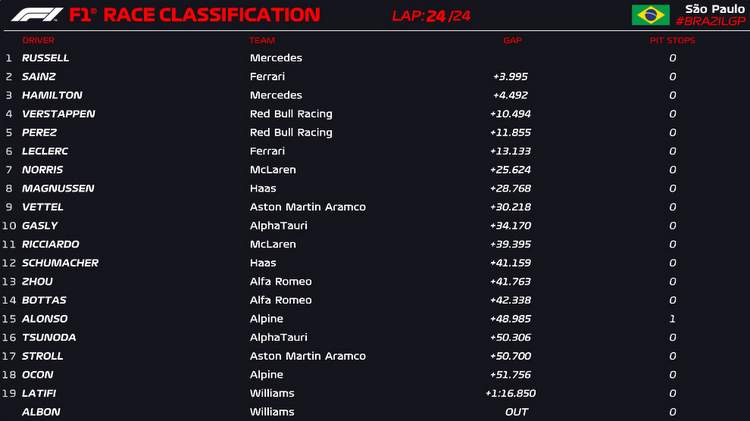