Sao Paulo FP2: Ocon fastest ahead of the Sprint 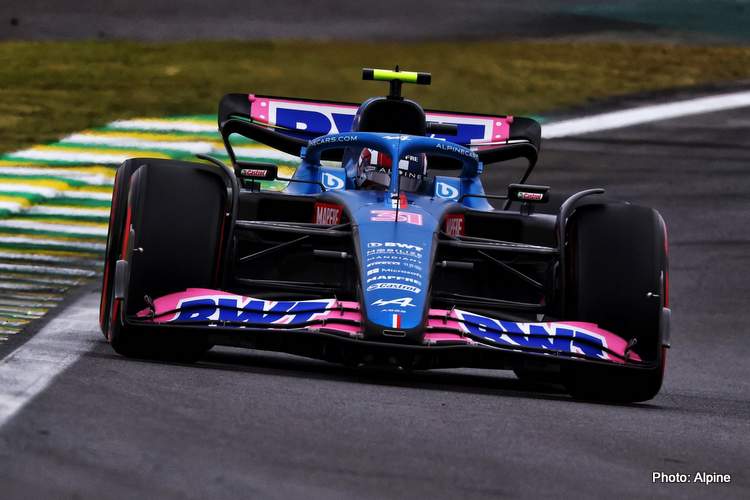 Esteban Ocon was the fastest driver at the end of FP2 in Sao Paulo, as Formula 1 prepared for the final Sprint Race of the season.

Needless to say, not much can be read into the lap times as all the teams were running different programs with different fuel loads and tyre compounds with the focus being on long runs to decide which tyres should be used in the Sprint and then, Sunday’s race.

However, Esteban Ocon set the fastest lap of the session on new Soft tyres, with Sergio Perez second fastest in the Red Bull.

George Russell, in the Mercedes completed the top three.

Other than Kevin Magnussen taking pole during the Sao Paulo qualifying on Friday, nothing else was worth noting, even Ferrari’s tyre strategy in Q3 for Charles Leclerc cannot be considered as a surprise anymore.

So Friday belonged to Kevin Magnussen and Haas and it was such a feel good story to see the Dane snatch his firs ever career pole on his comeback season.

But how can will he fare in the Sprint Race, and can he keep the charging Max Verstappen at bay? Doubtful, but we should be in for a nice first lap. Keep in mind Leclerc will be starting from tenth and will be on a mission.

But ahead of the Sprint, there is still FP2, the teams’ last chances to finalize their car setups keeping Sunday’s race in mind as well.

Williams will have Logan Sargeant in the FW44 for FP2 with Alex Albon making way for the the American who is chasing super-license points to secure a full time Formula 1 seat with the team in 2023.

FP2 started in dry and sunny conditions with teams focused on preparing for the Sprint Race and Sunday’s grand prix, meaning headline times are not a priority, as tyre choices for the Sprint will be decided.

As the session started all tyres compounds, Soft, Medium, and Hard were being utilized by different teams to evaluate them.

Almost ten minutes into the session, all cars were out on track except for McLaren and AlphaTauri, while Logan Sargeant was putting in the laps.

The American needs to accumulate 100Km this session, which equates to 24 laps around Interlagos.

The Sarge is getting those laps in 🫡

Charles Leclerc started the session conducting long runs on the Soft compound, while Red Bull with Sergio Perez and Max Verstappen were sampling the Hard compound, which from the times set by the Mexican seems to be a decent race tyre.

Ferrari will be looking to see whether the Soft tyre can last for the whole duration of the Sprint Race, as Carlos Sainz was running the Medium compound.

Leclerc’s front left Soft tyre started to degrade towards the end of his long, can this compound still deliver performance for the 24 laps of the Sprint? The Monegasque’s registered lap times were consistent…

Nicholas Latifi had a moment between Turn 12 and 13 and went off track with an excursion through the grass, but kept his Williams in one piece.

Latifi finds the grass in the final sector#BrazilGP #F1 pic.twitter.com/8QnyRNT05i

With 15 minutes to spare from FP2, Sargeant completed the required 100km, and banked a super-license point, and wrapped up his session ten minutes before the end.

At the end of the session, drivers did some practice starts at the start/finish line, Magnussen naturally practicing from the top spot…

Esteban Ocon’s session topping time was a 1:14.604, and was followed by Sergio Perez, second and 0.184s slower than the Frenchman.

Goerge Russell was third fastest in the Mercedes, 0.312s off the Ocon’s time, as Fernando Alonso was fourth fastest, 0.133s behind the Briton.

Lewis Hamilton followed, sixth fastest for Mercedes, clocking a 1:15.137, 0.039s slower than Verstappen, while Pierre Gasly was 0.499s further down the road in seventh.

Mick Schumacher went eighth fastest for Haas, 1.080s down from the top, and was followed by teammate Kevin Magnussen in the sister car, ninth and 0.131s slower. 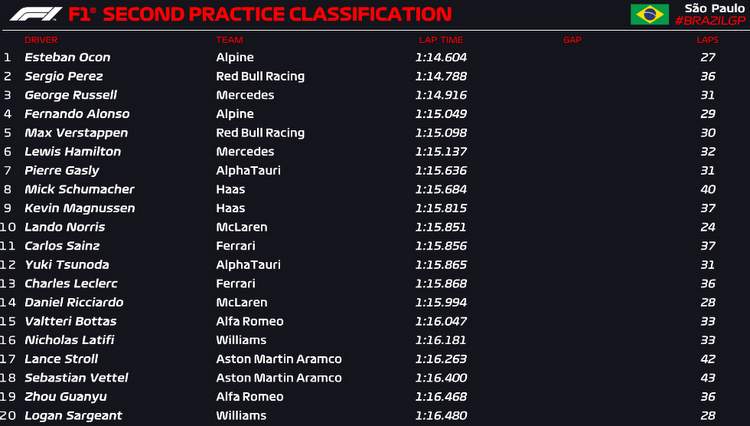