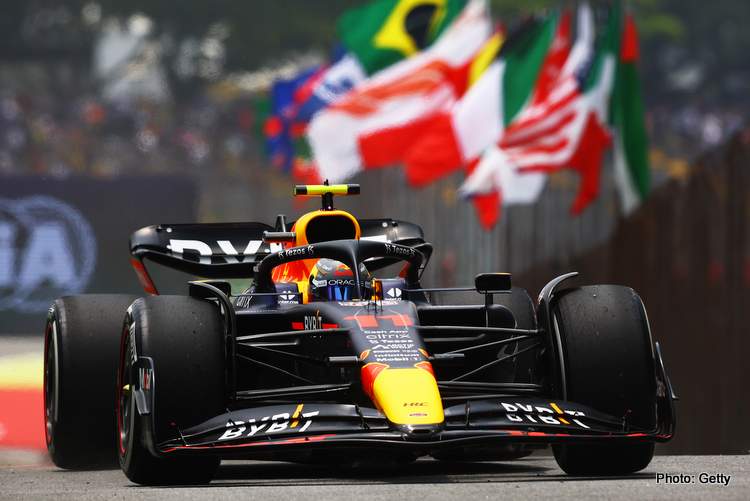 Sergio Perez finished FP1 for the 2022 Sao Paulo Grand Prix fastest ahead of Ferrari’s Charles Leclerc the gap between the two negligible.

Despite Perez being fastest, it is worth noting that teammate Max Verstappen – third fastest – was struggling with understeer all session long.

Charles Leclerc on the other hand had to go through traffic on his hot lap, so there is definitely more speed in his F1-75, meaning the Reds will be a threat in qualifying.

Carlos Sainz was fourth fastest in the #55 Ferrari, almost two tenths off the pace.

And then there were two, twenty grands prix went by, and we reached the penultimate race of the 2022 Formula 1 season in Sao Paulo, Brazil.

And it is a Sprint weekend, which mean FP1 will be a very important session as Qualifying will follow a few hours after that – we will have six of those next year…

Provided both Championships, Drivers’ and Constructors’, have been wrapped up by Max Verstappen and Red Bull, so there won’t be much to look forward to, unlike in 2021, when Mercedes showed up with that rocket engine (Do you still remember it? in Lewis Hamilton’s car as he utterly dominated that weekend despite numerous penalties.

Sadly this year’s Silver Arrow will need more than a rocket engine to be a contender and there is no guarantee Hamilton – even with the boost the honourary Brazilian Citizenship provides – can take a first win this season.

However, there is also no reason why Verstappen can’t take a 15th win and break his own record, as Red Bull and Sergio Perez will be working to get the latter the runner up position behind his teammate and deliver the perfect season result, and they have two more races to do that.

Ferrari should be back in contention after their anomaly of a 2022 Mexican Grand Prix, but other than that, Lando Norris seems to have recovered from his food poisoning and should be in action in FP1.

You can’t get rid of me that easy pic.twitter.com/fT8H4Y0PHh

With only one hour available to set the cars up for Qualifying, the teams and drivers did not waste any time to get running, the track becoming busy within minutes of the Green Light.

Max Verstappen, on his first hot lap went off track at Turn 5, the tyres and brakes of the RB18 not yet thermally ready to deliver, but not drama and no damages there.

The Dutchman immediately went on to take the fastest time over three tenths faster than teammate Sergio Perez, both on Hard tyres early in the session.

Valtteri Bottas then sets the exact same time as Vestappen, but on Medium tyres, the Finn then goes fastest on the same compound, but Verstappen wouldn’t have it, he retakes the top spot on Hards.

Ten minutes into the session, Verstappen reports to his team: “The car doesn’t turn in at all.”

Carlos Sainz kicks up some dirt as he tries to avoid Lando Norris#BrazilGP #F1 pic.twitter.com/mAdEhVZT9S

Carlos Sainz had a moment with Lando Norris at Turn 3, the Spaniard not impressed with his former teammate.

“Super dangerous from McLaren there,” is what Sainz had to say, who by the way, will have a five-place grid penalty for Sunday’s race for an engine change.

After a brief break, the Red Bull drivers went out on a run on Soft tyres Perez going fastest, edging Verstappen by 0.008s, as the double Champion still not happy with his RB18.

“It still doesn’t turn, waiting for the front end,” he radioed the team.

Checo jumps onto the softs for a quick run and goes fastest with a 1:11:853 #BrazilGP #F1 pic.twitter.com/ZUFfz9CEWs

Many other teams – notably Mercedes and Ferrari – seemed to be avoiding the Soft tyres, in an attempt to save them for later in the weekend.

With 20 minutes remaining, Carlos Sainz, the faster Ferrari was only 0.251s off Perez’s fastest times, Sainz on Mediums, Perez on Softs which makes it interesting to see how both cars face off on Softs in Qualifying.

Lewis Hamilton is not happy with his W13 either; he reported: “Feels like the rear is just floating around. No grip, particularly on the rear.”

He heads back to the pits and Mercedes start working on changing the setup of his car.

Hamilton locks up after he runs wide and takes too much kerb at Turn 8#BrazilGP #F1 pic.twitter.com/VX184yS5Qv

The drivers head to the start/finish line for practice starts at the end of the session.

Max Verstappen was this fastest, 0.008s slower than his teammate, while Carlos Sainz was fourth fastest in the other Red Car, 0.186s off the pace.

Lewis Hamilton was fifth fastest for Mercedes, 0.001s behind Sainz, while teammate George Russell was sixth fastest in the sister Silver Arrow, 0.202s down from the top time.

Aston Martin’s Sebastian Vettel was an encouraging seventh, clocking a 1:12.157, three tenths off the benchmark, as compatriot Mick Schumacher was eighth fastest, 0.157s further down the road.

Valtteri Bottas was ninth fastest for Alfa Romeo, 0.613s off the fastest time, as Pierre Gasly rounded off the top ten, 0.001s behind the Finn. 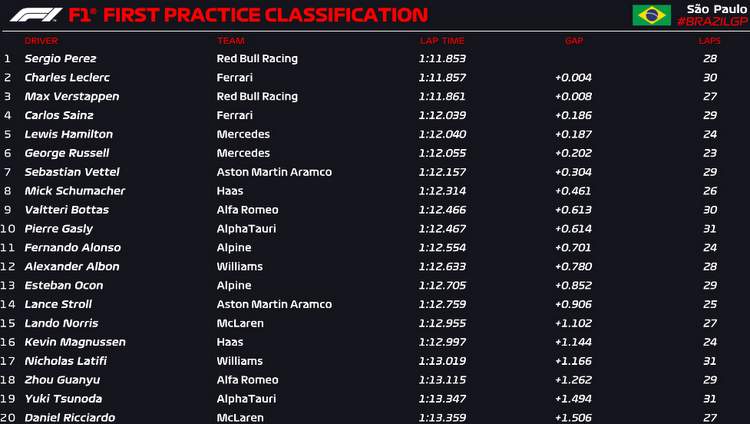