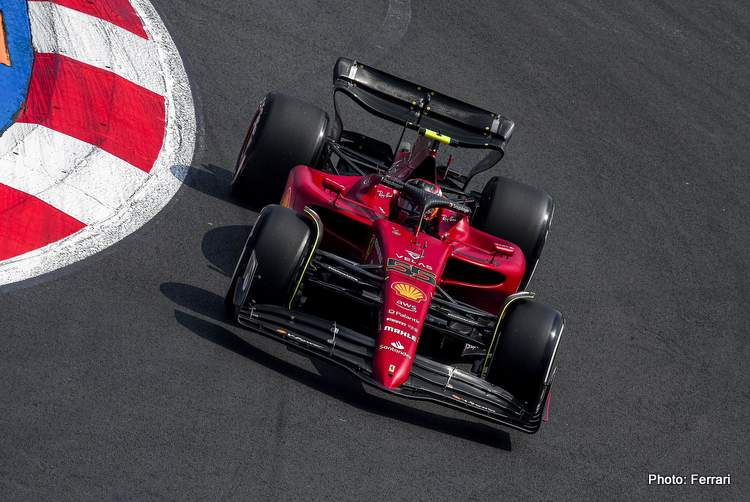 The session was ended with a Red flag with under five minutes remaining from the session, as Liam Lawson – replacing Yuki Tsunoda at AlphaTauri – parked the car on the side of the track in the podium section, with smoke coming out of the AT03’s brakes.

In the end Sainz was fastest of all marginally ahead of Charles Leclerc, second fastest in the sister Red Car, as loack hero Sergio Perez was third fastest.

The Spaniard seemed to be enjoying the same form he had back in Austin where he took pole last weekend, but whether he can sustain this speed of the course of the weekend is the question.

Double Formula 1 Champion Max Verstappen was fourth fastest in the #1 Red Bull RB18 after surviving a couple of slides suffering from lack of grip.

On the back of an exciting grand prix in Austin Texas, the 2022 United States Grand Prix, Formula 1 was back in action at the heights of two kilometers above sea level for the seventh time in the sport’s modern history.

Red Bull secured their fifth Constructors’ Title last week in Austin, albeit in sad circumstances as they lost their founder Dietrich Mateschitz, while simultaneously dealing with the repercussions of their 2021 cost cap breach.

But that is now over, as the FIA gave out their ruling early on Friday, and hopefully we can now move on, but who are we kidding, we will not move over and much will be spilled on this subject.

Back to racing, Sergio Perez is pumped up for his home race amid the venue’s contract extension with the F1, and will be looking to be the first Mexican to win his home race, but he cannot count on any favors from teammate Max Verstappen who is adamant he will go for the win himself and break the record of most wins per season.

Will Mercedes perform better around Autodromo Hermanos Rodriguez? And what of Ferrari? Or will Red Bull run away with this one as well?

Ready to knock it out of the park in first practice ⚾️#MexicoGP #F1 pic.twitter.com/0t1pzoZ4qR

FP1 this weekend as well saw many driver swaps as the teams went on with the mandatory young driver session allocation.

Jack Doohan will be making his FP1 debut for Alpine in Esteban Ocon’s place, while Alex Albon makes way for Logan Sargeant at Williams.

With the session green lighted, Sebastian Vettel was the first driver to head out of the pits followed by Fittipaldi in the Haas.

Local hero Sergio Perez followed in the Red Bull to be received by the cheers of his home crowds.

It was not the smoothest start for Liam Lawson in the AlphaTauri, as he suffered brake trouble after only one lap in the car.

He hit the brakes and his car released a puff of black smoke from the back, the driver soon reporting he has no brakes.

LAW: “I have no brakes, brakes are completely gone” 😬

Daniel Ricciardo also suffered some issue with his car halfway through the session, and was back in the McLaren garage for the team to investigate it.

The team are investigating an issue on Daniel’s car in FP1.

Daniel’s hopped out of the car briefly while the team carry out the work.

Hopefully, he’ll be back on track in no time.#MexicoGP

Just as he was setting out on Soft tyres to set, Max Verstappen spun his RB18 at Turn 10 but was lucky not to get any damage.

“It’s unbelievable. I couldn’t correct it. So little grip!” was the Dutchman’s message to his team.

Max spins in the twits and turns of the final sector 😵‍💫

He almost catches the slide, but ends up facing the wrong way#MexicoGP #F1 pic.twitter.com/tcnDZjKPjz

Moments after Verstappen’s moment, Zhou Guanyu stopped at the pitlane exit, with a problem with his Alfa Romeo.

The Chinese driver reported: “I can’t up shift, I’ve switched my engine off because otherwise it will get too hot.

Forty minutes into the session, Fittipaldi brought out a Red flag as his Haas ground into a halt with smoke coming out of it. He had just exited the pits and stopped at Turn 2.

Pietro Fittipaldi is told to pull over as he exits the pits, and he jumps out of the car on the exit of Turn 3#MexicoGP #F1 pic.twitter.com/LrrvlACYcw

The session was relaunched with 17 minutes remaining on the clock, also Vettel leading the pack out of the pits, but not Jack Doohan as the Alpine he was driving was up on the stands in the team garage with work ongoing. Unfortunate for the young Australian.

The session came to an end with a Red flag caused by Liam Lawson suffering from brake failure in the AlphaTauri.

Liam Lawson’s brakes cry enough, and they catch fire as the Kiwi comes into the stadium section

He’s out of the car and OK, but the session won’t resume#MexicoGP #F1 pic.twitter.com/tS28TZFqkc

Carlos Sainz clocked a 1:20.707 lap around the Autodromo Hermanos Rodriguez, to go fastest, a mere 0.046s ahead of Charles Leclerc, second fastest.

Sergio Perez was third fastest in the Red Bull, 0.120s off the pace, with Max Verstappen fourth fastest setting an identical time to the Mexican.

Valtteri Bottas went seventh fastest for Alfa Romeo with a lap time of 1:21.083, and 0.037s ahead of eighth-placed Lando Norris in the McLaren.

Pierre Gasly was ninth fastest in AlphaTauri, 0.603s down from the benchmark time, as Aston Martin’s Sebastian Vettel rounded off the top ten, 0.215s behind the Frenchman. 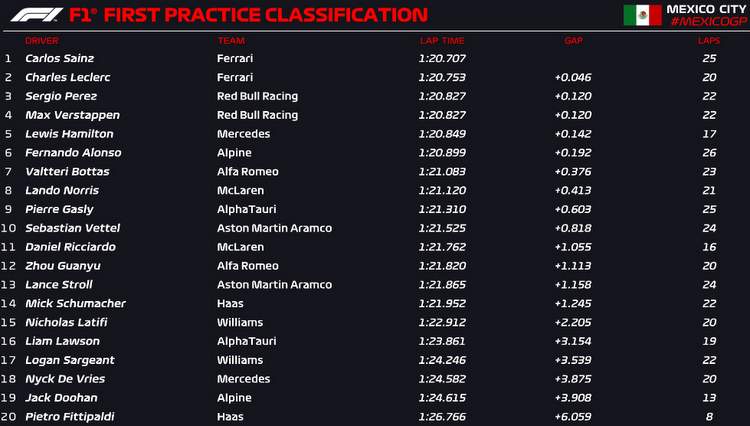