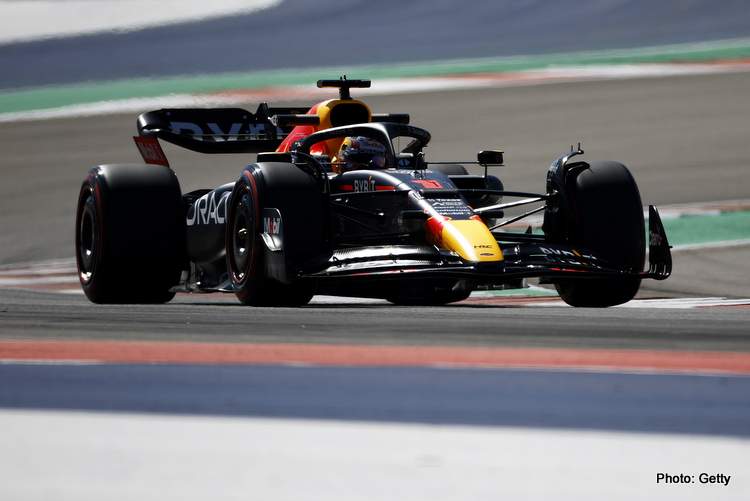 Max Verstappen topped the final practice session for the 2022 United States Grand prix ahead of qualifying, by a big margin from Charles Leclerc.

The 2022 Formula 1 Champion finished FP3 on top with a 1:35.825, and was over three tenths of a second ahead of Ferrari rival Charles Leclerc.

Carlos Sainz was third fastest in the sister Ferrari, as Sergio Perez – who had a close call with Fernando Alonso in the dying moments of practice – was fourth fastest.

There was nothing spectacular from Friday’s running at the Circuit of the Americas (COTA), with FP1 not delivering any shock results, while FP2 was meaningless as it was dedicated for testing Pirelli’s prototype tyres.

Yet, the main talking point remained to be Red Bull’s cost cap breach as their ongoing discussions with the FIA meant no decision was made yet.

But with FP3 being the final session before the all important qualifying, maybe we can soon settle into the racing and take our minds off the controversies and F1 politics.

The final practice session at COTA in clear weather conditions and in front of packed grandstands.

Look at this CROWD! 🤯

America, you do not disappoint 👏👏👏#USGP #F1 pic.twitter.com/x9MUH4lCZC

Ten minutes into the session, Mick Schumacher suffered a problem with his Haas, as he went on driving slowly around he track, having reported to his team: “I can’t box.”

The team later informed him that they know what needs to be done to sort out the problem.

“We know what we need to do to fix it, just a quick 15 minutes then back out,” was the team’s response, as Haas revealed it was a problem with the ERS water pump.

After a flurry of fast laps by several drivers at the beginning of the session, Max Verstappen went to the top of the timing screens, around the 15-minute mark of the session, Carlos Sainz second, and Charles Leclerc third.

Worth noting is that the teams will be focused on long runs and race simulations as they prepare for Sunday’s race to make up for the lost time, testing tyre prototypes in FP2.

Charles Leclerc reported that the Soft tyres were only good for one lap, before improving his time, becoming second to Verstappen, 0.06s slower.

With 20 minutes gone, Daniel Ricciardo seemed to be suffering from brake problems. “Something is wrong with the brake pedal,” the Australian radioed back to the McLaren garage.

Brad Pitt continued his homework, preparing for his upcoming movie about F1, the movie he is working on with Lewis Hamilton.

The Hollywood star was at the track watching the action.

Lovely to see Brad Pitt back for another day of action at @COTA 🤗🎬#USGP #F1 pic.twitter.com/ufKkIjtO2J

George Russell fancied a bit of drifting with 40 minutes elapsed from the FP3, as he lost his W13 in Turn 1 but held it well, having to abort his flying lap.

Lewis Hamilton was behind Russell on a flying lap as well, but neither driver seemed to be comfortable with his car’s balance.

It’s a bit slippy out there for George Russell! 😳

Charles Leclerc seemed to be stuck in the Ferrari garage for some time, but was out again in the final ten minutes. The same applied for Mick Schumacher whose car required 40 minutes to fix instead of the 15 the team estimated.

On a final note, tail wind was major player during the final practice session, catching out all the drivers out on track.

Max Verstappen’s FP3-topping time was a 1:35.825 which clocked in the dying moments of the session, as Charles Leclerc was 0.320s behind in second.

Carlos Sainz was third in the Ferrari, 0.126s behind his teammate, while Sergio Perez was fourth 0.572s off the pace.

Lewis Hamilton was fifth fastest for Mercedes, 0.004s behind the Mexican, and was followed by Fernando Alonso in the Alpine, sixth, but over one second away for Verstappen’s benchmark time.

George Russell was seventh fastest in the #63 Silver Arrow, 0.136s behind Alonso, while Sebastian Vettel continued Aston Martin’s decent form at COTA; the German eighth fastest albeit 1.326s down from the top. 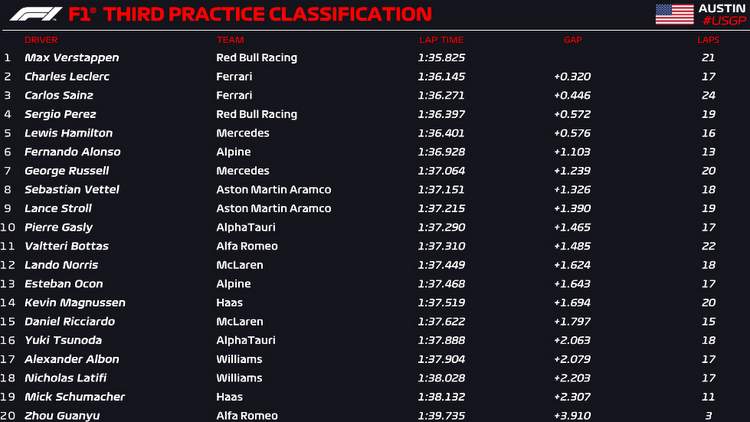