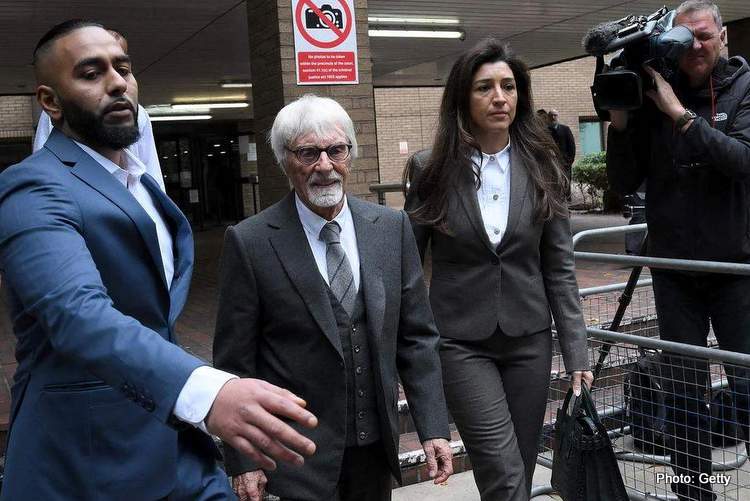 Deposed Formula 1 boss Bernie Ecclestone was told he will face trial next year for a charge of tax fraud related to more than $450-million of overseas assets.

On Tuesday, the 91-year-old appeared at London’s Southwark Crown Court accompanied by his wife Fabiana, having indicated a not guilty plea to one count of fraud by false representation at a hearing last month.

Ecclestone is accused of having made an “untrue or misleading” representation to the British tax authority between July 2013 and October 2016, according to the Crown Prosecution Service indictment.

The indictment says the British billionaire dishonestly told HM Revenue and Customs that he “established only a single trust” in favour of his daughters and that “other than the trust established for his daughters he was not the settlor nor beneficiary of any trust in or outside the UK”.

Wearing glasses, a dark grey three-piece suit, white shirt and grey tie with blue stripes, he was allowed to sit in court behind his lawyers rather than in the dock because of his hearing difficulties, while his wife watched from the public gallery.

When the hearing resumed, the defendant was not asked to formally enter a plea and Judge Deborah Taylor fixed a trial date for October 9 next year. Ecclestone was granted unconditional bail ahead of his trial

Langhorn said the trial is expected to last up to six weeks, potentially sitting half days because of the “defendant’s fitness to participate”, while the judge said he may not be required “to be present throughout”.

Ecclestone previously indicated he would enter a not guilty plea at a hearing at Westminster Magistrates’ Court in August.

As mentioned, the charge alleges that Ecclestone, who has three grown-up daughters – Deborah, 67, Tamara, 38, and Petra, 33 – and a young son, Ace, allegedly made a representation to officers of HMRC, “which was, and which he knew was or might have been, untrue or misleading”.

The particulars state that Ecclestone claimed “he had established only a single trust, that being one in favour of his daughters” and “other than the trust established for his daughters he was not the settlor nor beneficiary of any trust in or outside the UK”.

The charge against him was authorised by the Crown Prosecution Service (CPS) in July following an investigation by HMRC, which said the probe had been “complex and worldwide”.

Chief Crown Prosecutor Andrew Penhale said at the time: “The CPS has reviewed a file of evidence from HMRC and has authorised a charge against Bernard Ecclestone of fraud by false representation in respect of his failure to declare to HMRC the existence of assets held overseas believed to be worth in excess of £400 million.”

Ecclestone was ousted as F1 supremo in 2017 when U.S.-based Liberty Media took over the sport’s commercial rights.

He maintains an office in London but now spends most of his time abroad, with residences in Switzerland and Ibiza as well as a farm in Brazil. (Reporting by Michael Holden; Additional Reporting by PA Media)