Red Mist: What if Ferrari did get their Maths right? 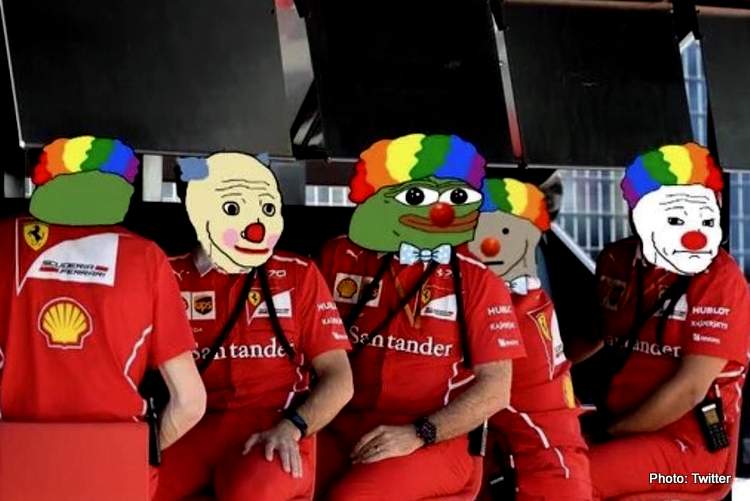 What if Mattia Binotto and his Ferrari cronies did everything right this season, and never messed up the maths or strategy? Let’s play a game of Excel Formula 1.

Excel is a splendid computer program. It makes crunching numbers really easy. So, with all this speculation surrounding how exactly Ferrari has screwed its F1 campaign up this year, I thought it would be a good idea if we could work it out once and for all.

I love data and I love statistics, and being quite thorough, I worked a plan and set about it. Of course, if grandma had balls, I would not be here. None of us would. ‘If’ is one of those words that losers use. So I suppose it fits. 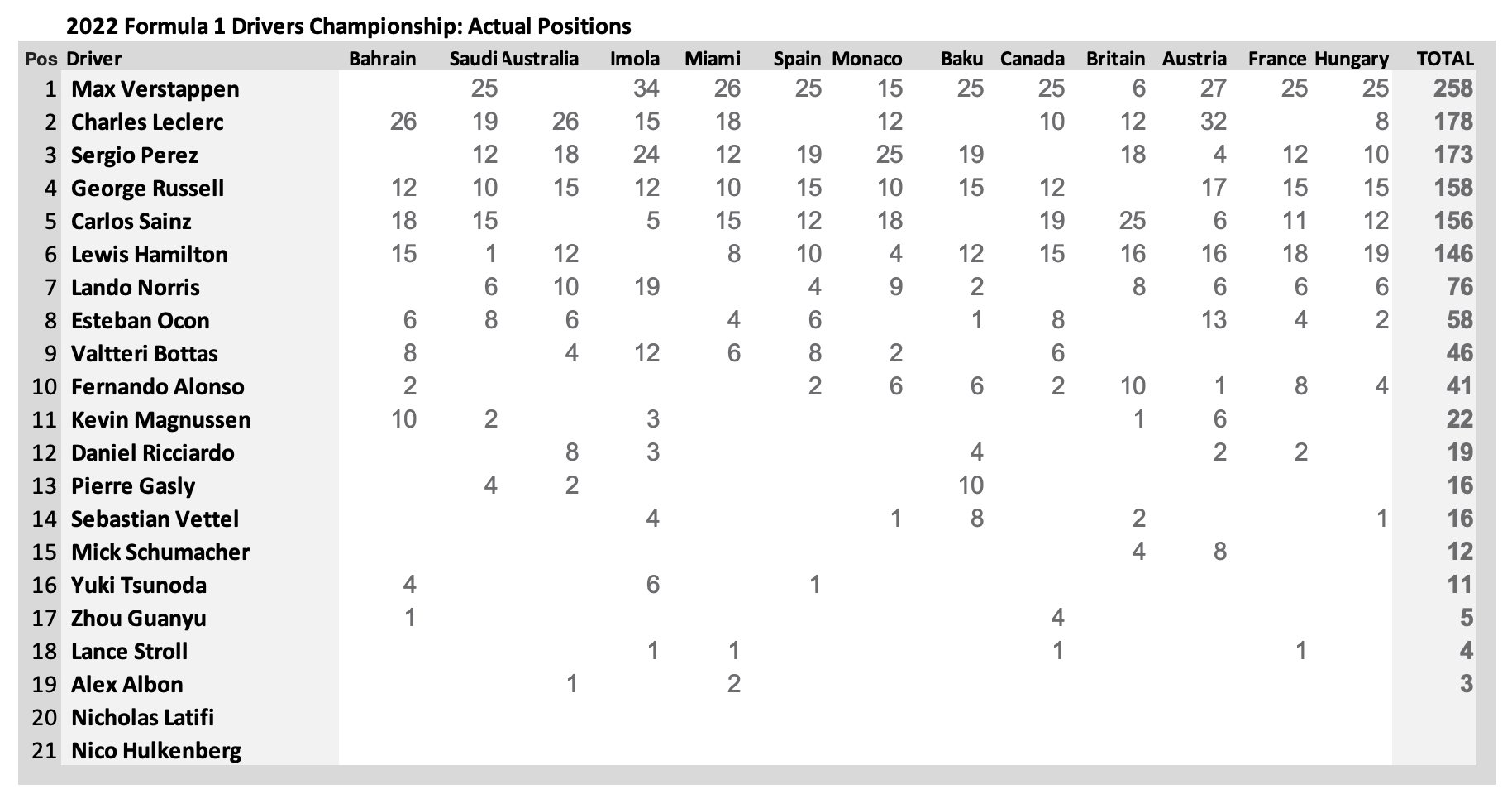 The objective was simple — to one by one remove the variables from this year’s championship to try to understand where we would be without Ferrari’s engine failures, driver errors and, of course, botched strategy.

Now to keep this playing field level, we applied the same changes to both Red Bull and Mercedes’ drivers, because they too have had their own issues. Red Bull a few. Mercedes only one to really talk of.

So to start, I logged the current championship standings into a fresh new Excel sheet above. Nothing strange there, it’s how it is…

Now, based on the above, I copied the data out and pasted it into a new tab. Then I went into my notes about the major failures in 2022, and guess what? Advantage Red Bull to start. Max Verstappen retired from two of the first GPs, Sergio Perez one. 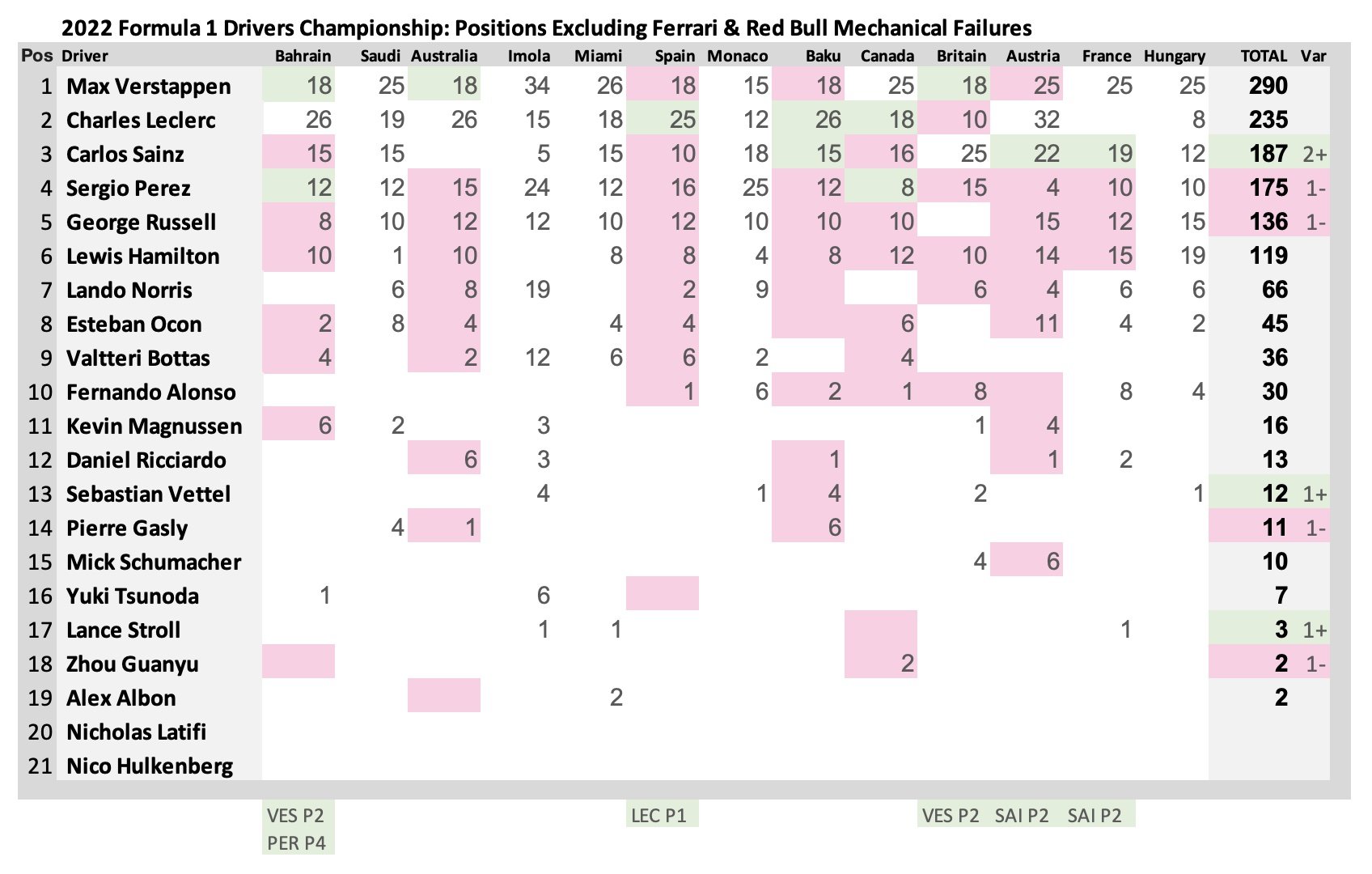 How it could have been. If no cars broke

Applying those changes to the table above, you will see a green block where I added each driver’s points back to where they should have finished. The red blocks denote the drivers that would have lost points behind them. The green blocks below the actual table show the revisions.

Moving on, notice Leclerc is added back in as the winner in Spain, the lost Ferrari 1-3 in Baku, Verstappen regaining P2 in Britain and Sainz losing P2 in Austria.

This one also considers Leclerc starting in Front in Canada, and Sainz doing the same in France, both without grid penalties. And I gave Max second at Silverstone for losing pace to debris damage.

Notice that versus the actual data above, Max actually ends up with 42 more points. But Leclerc would have scored 57 more and Sainz is up to third, having recovered his 31 points lost to Ferrari woes.

Not much changes for Perez, who drops a place, but Russell takes a knock having lost all the points he skived from all those rivals’ troubles. And there’s a ripple effect further down the order as Vettel and Gasly, and Stroll and Zhou swap places by virtue of those results being reshuffled. 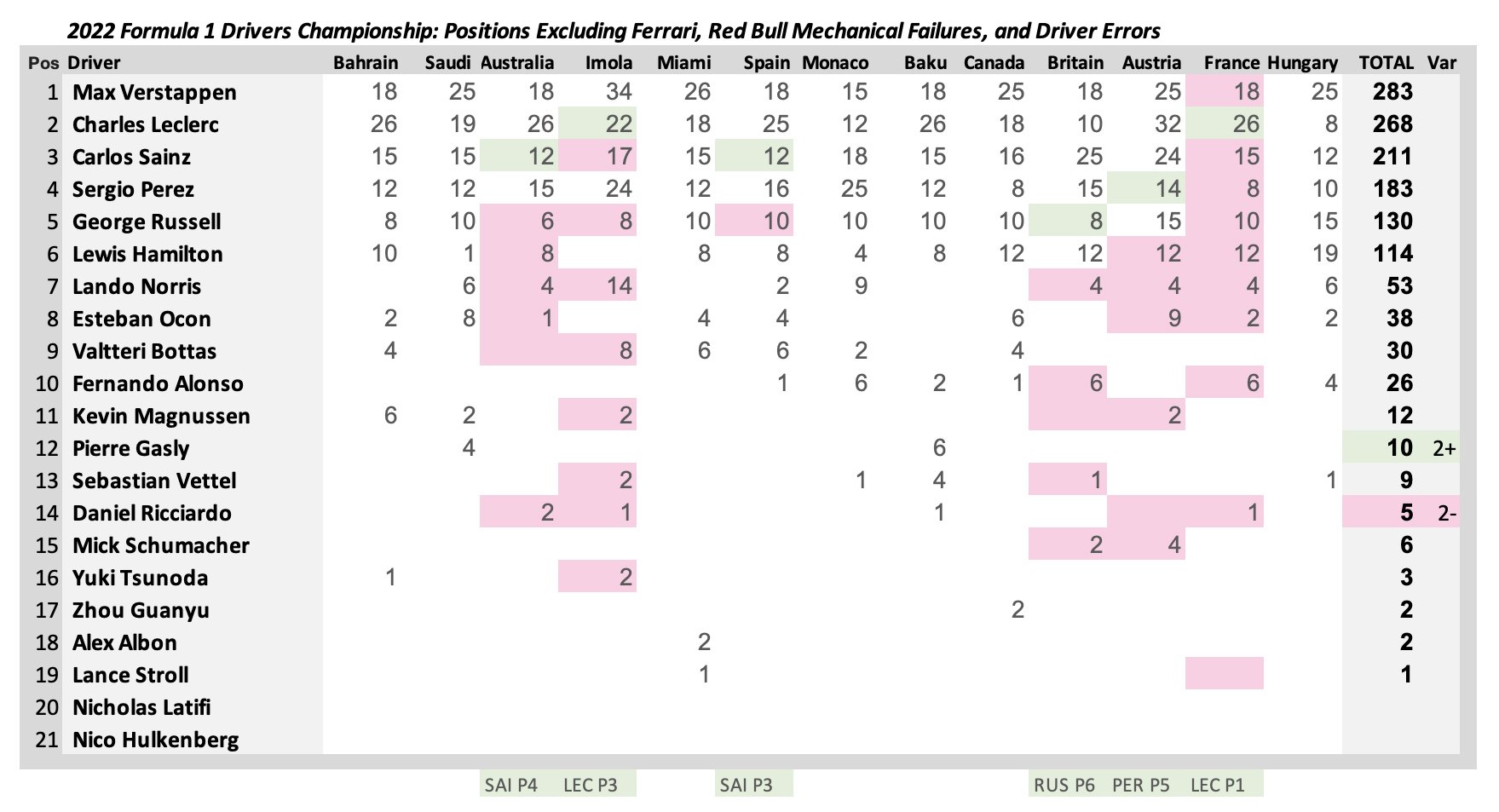 So what if the drivers never erred?

Next step was to consider driver error and bad luck. Nobody’s perfect, you know? Remember, to keep it simple we are only considering Red Bull, Ferrari and Mercedes here. Max Verstappen has done little wrong. His situation only changes in this one because those around him had issues. Put them back in and it changes.

Merc’s drivers have not done much wrong either, bar for Gorge checking on his mate Zhou, so I gave him fifth back in Britain.

Charles and Carols have not had a perfect year. Sainz fell off in Aussie and he was taken out by Danny Ric at Imola. Charles also spun there and lost a pile of places. And then he went off while leading in France too. And don’t forget Perez in Austria. Punch that all in, let Excel work it out and voila!

Now in the driver-rectified table above, Max has six more points, Charl 33 more and he’s just 15 off Verstappen. Sainz is also far closer to having his 28 tossed points returned, and Perez regains a handful, too. And Gasly and Ricciardo swap places on each side of Vettel in 13th. 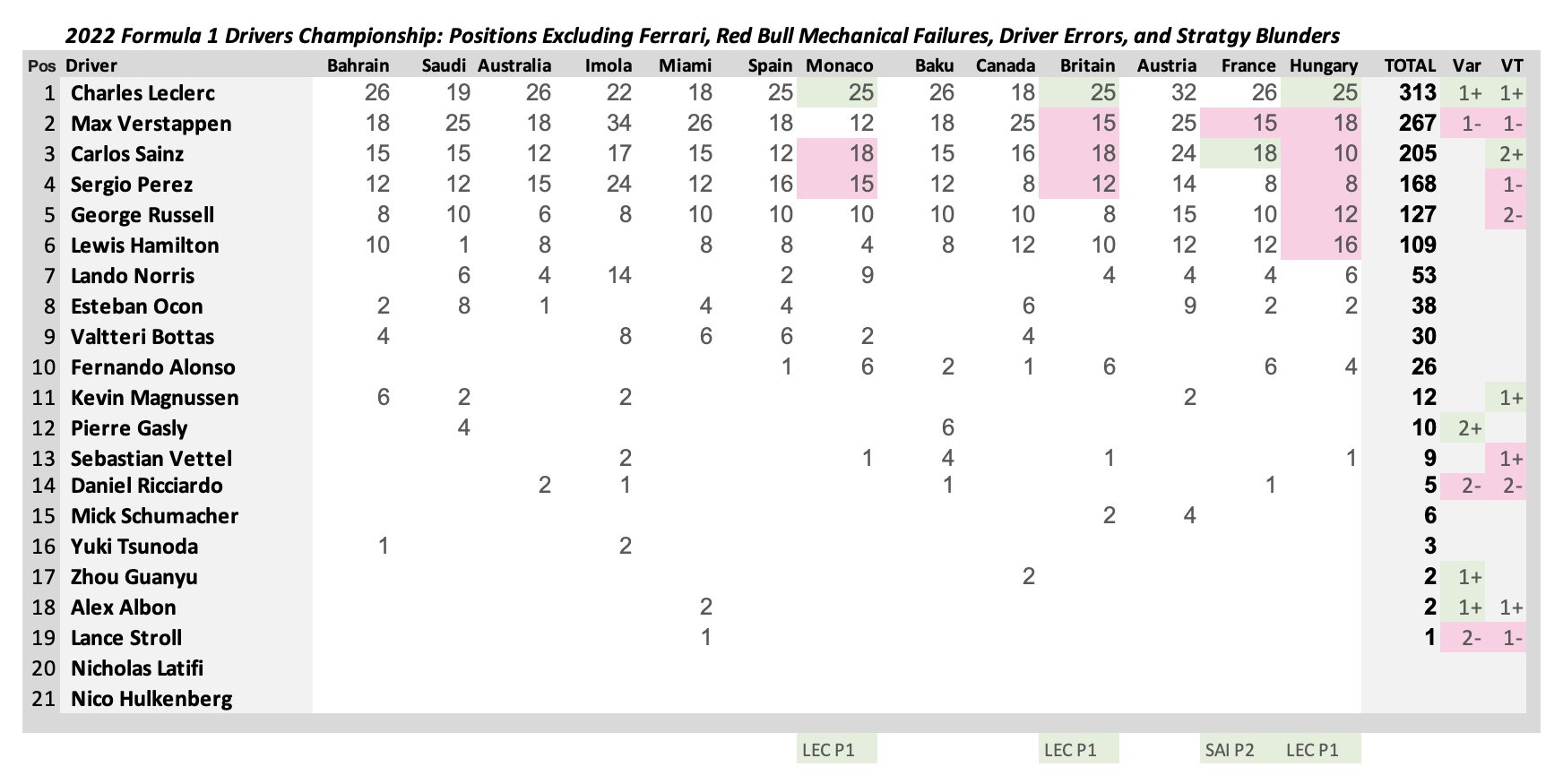 Now for the killer! Ferrari strategy.

All would be well and good but hang on a second. Now while old Binotto thinks his strategist do know wrong, the rest of us know otherwise.

Taking Ferrari’s quartet of pit wall catastrophes into consideration brings about the biggest changes to our exercise of Excel Formula 1 What ‘If’. Had Leclerc won as he should have in Monaco, Britain and Hungary, he’d have scored 30 more points than he did.

Put on top of his mechanical and driving faux pas as per the fourth table above, Leclerc would be leading the World Championship by 46 points right now.

In other words, he’d have scored 61 points more than Max had Ferrari just run its strategy right, considering Leclerc’s Gains and Verstappen’s losses. Sainz loses out a bit through all this, but he too would be 10 points closer to Max.

The extra column on the right in this final chart covers the position changes across all four panes. And based on that 61-point swing on strategy alone between Charles and Max, Leclerc would be just 19 points behind Verstappen right now. So even with all the mechanicals and driver errors still in place, We’d be heading onto a thrilling second half.

Instead, we go in with an 80-point chasm and the clowns on the wall are statistically likely to cock it all up at least twice or three times more thorough the season. So sad, isn’t it?

Oh yes, by the way, as it is, Red Bull actually has 436 constructors points in the bag after Hungary, Ferrari 334. Based on all the issues we have covered, Rd Bull would have 435 and Ferrari 518. Need we say more?