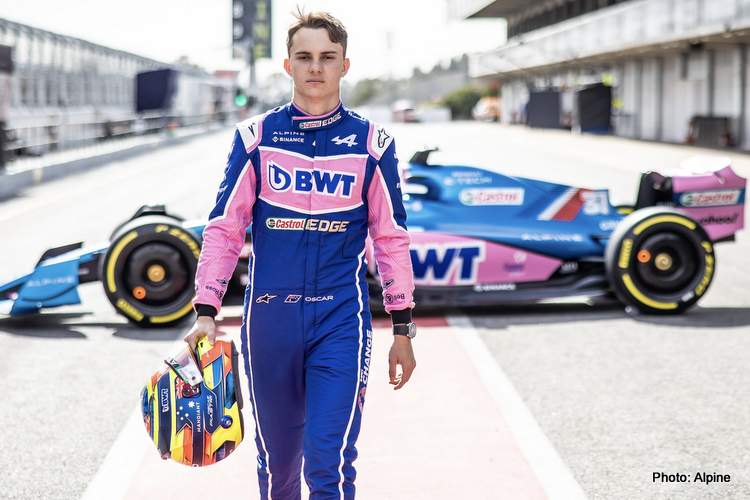 Alpine announced today that Oscar Piastri, the team’s reserve driver and reigning Formula 2 Champion will replace Fernando Alonso at the team in 2023.

Alpine did not waste time confirming Piastri, after Alonso announced that he will be driving for Aston Martin on Monday, as the highly rated junior driver was the most obvious option for the French Formula 1 team.

BWT Alpine F1 Team said in a statement: “BWT Alpine F1 Team confirms 21-year-old reserve driver Oscar Piastri as Esteban Ocon’s teammate starting from 2023. In line with the commitments made by the Team to the young Australian, Oscar will be promoted to race driver and step in Fernando Alonso’s seat from next year onwards.

“Oscar has been a valued member of the Alpine family for the past four years. The Melbournian joined the Alpine Academy following his title win in the Formula Renault Eurocup Championship in 2019. With support and guidance from the Academy, Oscar went on to win the 2020 FIA Formula 3 Championship before making it an unprecedented three drivers’ titles in a row by winning the FIA Formula 2 Championship in 2021. In doing so he became only the third driver to secure back-to-back Drivers’ Championships across Formula 2 and Formula 3; following only Charles Leclerc and George Russell.

“As part of his formative F1 journey, Oscar was first promoted to BWT Alpine F1 Team Reserve Driver at the start of the 2022 season and has since been undergoing, under the Team’s guidance and its full financial support, an intensive and comprehensive training programme of private tests in the race-winning A521, the 2021 Alpine F1 car, race support and simulator sessions to prepare him for the next big step into F1.

“Alpine now looks forward to seeing the next stage in his F1 career alongside Esteban Ocon,” the statement concluded.

Otmar Szafnauer, Team Principal, BWT Alpine F1 Team, added: “Oscar is a bright and rare talent. We are proud to have nurtured and supported him through the difficult pathways of the junior formulae. Through our collaboration over the past four years, we have seen him develop and mature into a driver who is more than capable of taking the step up to Formula 1.

“As our reserve driver he has been exposed to the team at the track, factory and testing where he has shown the maturity, promise and speed to ensure his promotion to our second seat alongside Esteban. Together, we believe the duo will give us the continuity we need to achieve our long-term goal of challenging for wins and championships,” Szafnauer added.

Szafnauer earlier revealed that he got to know that Alonso will be leaving the team from the press release, and that the Spaniard has not informed him of his decision prior to that.

After four years as part of the Renault and Alpine family, Reserve Driver Oscar Piastri is promoted to a race seat alongside Esteban Ocon starting from 2023. pic.twitter.com/4Fvy0kaPn7