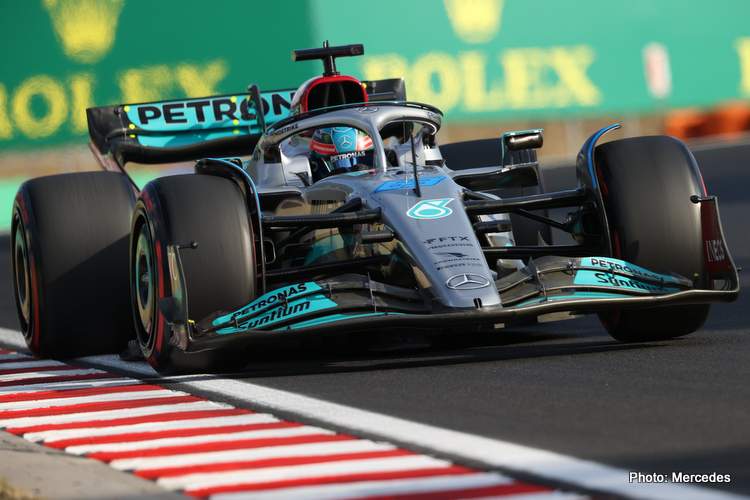 George Russell took his maiden pole position at the 2022 Hungarian Grand Prix denying Carlos Sainz with a mega lap in the last minute.

Qualifying started in dry conditions at the Hungaroring, but there was uncertainty whether the rain would hit the proceedings as dark clouds loomed over the circuit, but the weather remained dry as the surprise came in the form of a rampant Silver Arrow drivern by George Russell.

With Max Verstappen hitting trouble, losing power on his final lap in Q3, pole seemed to be a Red Affair between Carlos Sainz and Charles Leclerc.

Indeed, Sainz was on provisional pole when Russell was still on his final hot lap, and it was a great lap as he took the first pole position of his Formula 1 career by a tantalizing 0.044s.

Russell said after qualifying: “I am over the moon, absolutely buzzing.

“I mean, yesterday was arguably our worst Friday of the season and we worked so hard and we didn’t know what direction to go in.

“Then that last lap, I got around Turn 1 , mega Turn 1, then mega Turn 2 and the lap time just kept coming and kept coming.

“I came across the line and looked at the screen and saw we came P1 and it was an incredible feeling.

“We need to look into it and understand where that came from today. We are going to be absolutely going for it but either way that was a special day no doubt,” the Briton vowed.

What a lap from the Briton – his first career pole! #HungarianGP #F1 pic.twitter.com/K08w2LhLzt

Second placed Carlos Sainz added: “I am feeling better and better every race and every Qualifying session.

“Today I felt like I had the pace for pole position, but it went away from us in the final sector with a few snaps through the lap.

“Congratulations to George because he must have done a pretty good lap there,” he concluded.

As for Charles Leclerc, clearly disappointed said: “Today has not been a great day and I have struggled with the tyres and I have had inconsistency getting the tyres in the right window.

“So I struggled to put a lap together. We will look into it…. hopefully we will have a better Sunday.

“The pace is there so we just need to understand what went on with the tyres today and I am pretty sure we can come back tomorrow,” he added.

Russell clocked a 1:17.377 around the Hungaroring, which was 0.044s faster than Sainz who looked to be the favorite for pole until the dying moments of Q3.

Leclerc was third, 0.190s off the pace, which was not very surprising as the Monegasque did not seem quite comfortable in his F1-75 throughout qualifying.

Lando Norris was an excellent fourth in the McLaren, 0.392s off the top time, but crucially ahead of both Alpine drivers, Esteban Ocon and Fernando Alonso, who were fifth and sixth respectively.

Lewis Hamilton was seventh fastest, having faced a DRS issue on his final lap, and ended up being 0.765s off the pace of his teammate.

Valtteri Bottas was eighth fastest behind his former teammate, 0.015s slower than the seven-time Champion.

Daniel Ricciardo made it into Q3 but could not progress further than ninth, 0.610s off the pace of Norris.

Disaster for Red Bull, who lost Sergio Perez in Q2, as Max Verstappen’s first lap in Q3 was no good, the Dutchman complaining about front-end grip.

Heading out to do another lap on fresh Soft tyres, the reigning Champion reported a lack of power on his RB18, which the team could not sort out in the space of the final couple of minutes of Q3.

Hence, Verstappen will have to start the race from tenth on the grid. 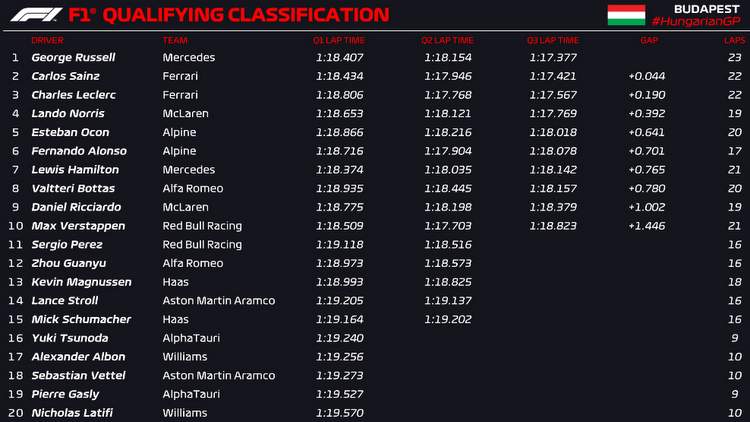 The conditions remained dry for Q2, and the session was over with Verstappen topping it 0.065s ahead of Leclerc in the Ferrari.

Alonso was third fastest ahead of compatriot Sainz 0.042s.

Sergio Perez was the first driver to be eliminated, as his first lap deleted for violating track limits, but the lap was later re-instated by the stewards as the Red Bull objected, claiming the Mexican was avoiding a slower car.

Perez had his lap time deleted for this BUT the stewards have now reinstated his time 👍#HungarianGP #F1 pic.twitter.com/TuvyKmoD0I

The Mexican complained from Haas’s Kevin Magnussen on his final hot lap, as the Dane impeded him, but ended up missing out on Q3 by 0.071s

Lance Stroll was only good for 14th in the Aston Martin, while Mick Schumacher will start the race from 15th in the old-spec Haas. 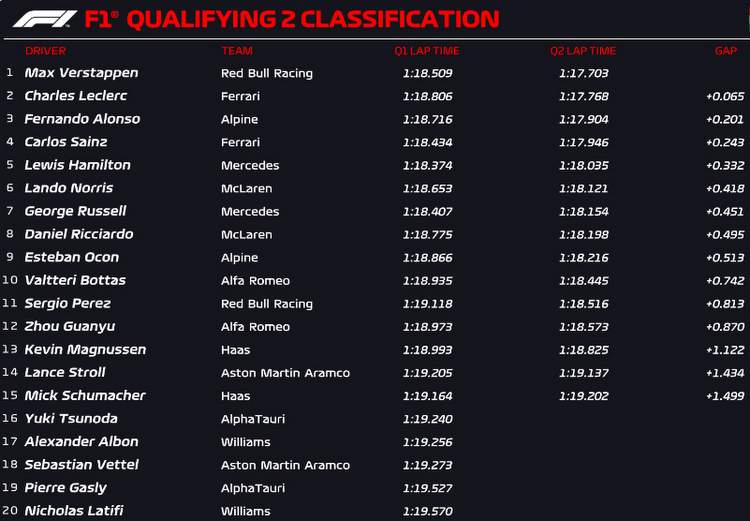 Q1 started in dry conditions, as all the drivers were sent out on track with the Soft tyres, as Magnussen was the first driver to go for a timed lap.

However there were some really dark clouds hovering over the Hungaroring, threatening to make things difficult for the teams and drivers, nevertheless interesting and exciting for fans and viewers.

Sebastian Vettel who crashed in FP3, was ready to take part in qualifying, after he gave his mechanics a hand as they prepared his AMR22.

The German will definitely be missed within the F1 paddock next year.

In the end of Q1, Hamilton finished the session fastest of all, with Russell second fastest after the Silver Arrows opted to have another run on fresh Soft tyres, as the track seemed to evolve quickly.

Sainz was third fastest, Verstappen fourth, while Leclerc was only eighth, with Mattia Binotto commenting on Sky Sports F1: “It has been a difficult Q1, it has been difficult for all the drivers.

“The temperature of the track is almost 20 degrees less than yesterday so different car balance. I think coming from the wet session, we need to get confidence once again with the car and the track. There will certainly be time to improve through the session so let’s see,” he added.

The first driver not to make the cut into Q2 was AlphaTauri’s Yuki Tsunoda, who had his first lap time deleted for violating the track limits, but in the end finished 16th fastest missing the cut by 0.035s.

In 17th, was Alex Albon in the Williams, followed by Vettel in 18th, the German 0.007 behind the Thai driver.

Pierre Gasly was also out in 19th, his best lap time also deleted for exceeding the track limits at Turn 5, while Nicholas Latifi was back to reality, dead last in 20th despite going purple in the first sector. 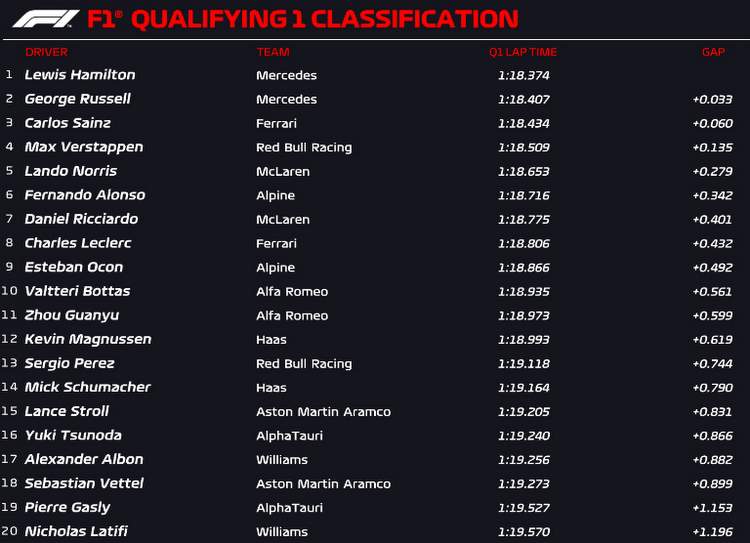