Zhou: I am ok, Halo saved me today 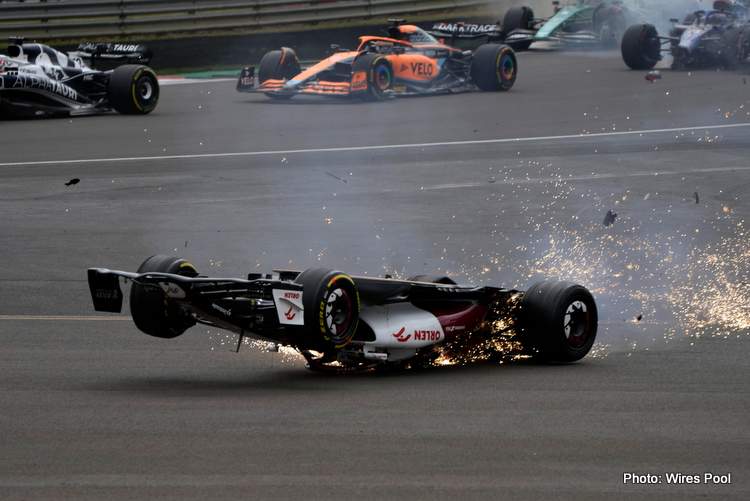 Chinese driver Zhou Guanyu said Formula 1‘s halo head protection system had saved him after his crushed car was wedged sideways between a tyre wall and metal fence at the British Grand Prix on Sunday.

The race was halted after the multi-car opening-lap collision, that was initiated as George Russell defended aggressively against AlphaTauri’s Pierre Gasly, clipping the Frenchman’s front-right tyre, and was sent off into the Alfa Romeo of Zhou Guanyu.

“I’m OK, all clear,” Zhou said on Twitter after a trip to the medical centre. “Halo saved me today. Thanks everyone for your kind messages.”

I’m ok, all clear. Halo saved me today. Thanks everyone for your kind messages! pic.twitter.com/OylxoJC4M0

The Halo saving lives since 2018

The titanium halo was introduced by Formula 1 in 2018, initially to some resistance from drivers who disliked the look of the protective ring around what had previously been a completely open cockpit. It has since been credited with saving a number of lives in serious incidents.

Emergency crews were quickly on the scene to extract the rookie, whose car skidded upside down along the track at speed before bouncing across gravel and flipping over the impact-absorbing tyre wall.

Photographs showed it crumpled on its side, leaning at an angle in the space between the fence and barrier with the halo protecting the driver’s helmet.

Zhou added in Alfa Romeo’s press release: “It was a big crash and I’m glad I’m OK. The marshals and the medical team at the track were fantastic with their quick response, and I also owe my thanks to the FIA and Formula 1 for all the work they have done, and they keep doing, to improve the safety of our cars.

“The Halo saved me today, and it goes to show that every step we take in improving our cars has real, valuable results,” he reiterated.

“I’m keener than ever to get back on track and do what I love. I’m fit and I’m looking forward to Austria next week,” Zhou concluded.

It was the second time on Sunday that the halo had saved a driver from serious injury, and probably worse.

Roy Nissany was protected by it when Norwegian Dennis Hauger’s car flew and landed on the Israeli Formula Two driver’s halo during a morning race.

Alex Albon also got away unhurt

Williams driver Alexander Albon was also caught up in the grand prix carnage and flown to hospital in Coventry by helicopter for precautionary checks.

All ok, the pets are ok 😅 but more importantly I’m glad @ZhouGuanyu24 is ok! Thank you to the medical staff and for all the messages. Eyes already on Austria 👊 pic.twitter.com/15PI86Iooz

Albon added in Williams’ post-race report: “I’m very glad that everyone else involved in the first lap incident is okay. Thank you to all the medical staff at the track and Coventry Hospital.

“It’s a shame our race ended before it began today, but we are already fully focused on Austria. Bring on the next one,” the Thai driver added.

Mercedes’s George Russell got out of his stricken car and ran across to check on Zhou, and said: “I got swamped by other cars and next thing I know I got touched, I was in the side of Zhou and that was it.”

Television replays of the crash were not broadcast until it was clear Zhou had been removed safely and was conscious. (Reporting by Alan Baldwin, Additional Reporting by GrandPrix247)