Hamilton: Leclerc sensible, different to what I experienced last year 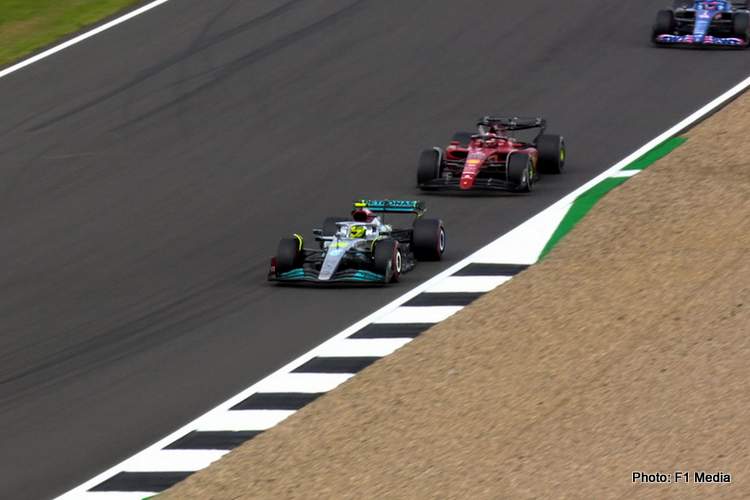 Lewis Hamilton took a swipe at Max Verstappen, claiming Charles Leclerc is more sensible in wheel to wheel battle than the Dutchman, after fighting intensely with the Monegasque during the 2022 British Grand Prix.

Almost ten laps from the end of the race, Lewis Hamilton was locked in a thrilling battle with Ferrari’s Charles Leclerc, who was on worn Hard tyres, his team failing to pit him under the Safety Car period.

It was intense stuff from both drivers with Leclerc fighting valiantly to keep the seven-time Formula 1 Champion behind, but ultimately failing to do so, settling for fourth as the Briton took his second consecutive podium.

Last year, Hamilton had a tussle at the start of the race with his rival at the time Max Verstappen, the two coming together at Copse, sending the Dutchman into the barriers at high speed, an incident the Stewards judged as Hamilton’s fault hitting him with a 10-second time penalty, after which he won the race.

But Hamilton still sees things differently, and used his praise of Leclerc to take a swipe at Verstappen.

“Charles did a great job, what a great battle,” he told Sky Sports F1. “He is a very sensible driver – clearly a lot different to what I experienced last year.

“At Copse for example, the two of us went through there with no problem. What a battle,” the Mercedes driver added. “We had to have a tyre deficit to get past him. Really, really amazing weekend.”

The eight-time winner at Silverstone was looking good to add a ninth to his tally of home wins, but failed to do so as Carlos Sainz and Sergio Perez were able to capitalize more on the late race Safety Car.

“For a while it [the race win] was feeling on. A bunch of things went against us,” Hamilton lamented. “The start, we got up to third then they put us back to fifth.

“Then I lost ground to Lando [Norris], so I spent a bunch of laps trying to get past him,” he pointed out. “Then the gap was five or six seconds to the Ferraris.

“But I was doing good time, catching them up, I did a good long stint and I thought: ‘Yes, maybe we can fight for a win here.’

“But unfortunately the gap was too big and the pitstop was not very quick. At the end, I just struggled with the warm-up and lost out to two cars. It was so tough today,” the winner of 103 grands prix summed up.

Hard fought! 👊 And powered on by your amazing support 👏 pic.twitter.com/kXZlqCsjll

Red Bull too quick for Hamilton on the straights

Hamilton later added in Mercedes’ race debrief: “I gave it everything today! I was chasing, trying to get those Ferraris, but congratulations to Carlos.

“They were just too quick today for us and at the end I was in amongst that battle with Checo. Those guys were just too quick on the straights for me today, but I’m so, so grateful for all the hard work the team did to get an upgrade here, we’ve made a step closer to them, so we’ve got to keep pushing!

“We’ve got some improvements to make but this is a huge bonus for us to be on the podium. I’m glad everyone was safe from that big crash at the beginning of the day. Thank you to everybody, we’re going to continue to push,” the Mercedes ace concluded.