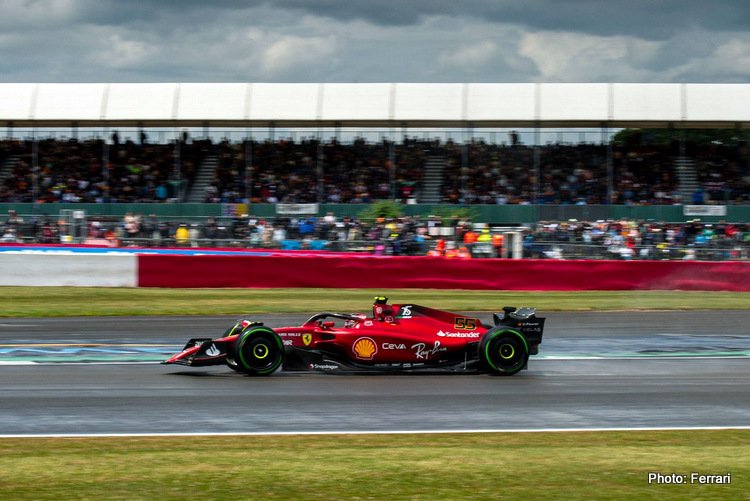 Carlos Sainz mastered the tricky conditions on Saturday afternoon at Silverstone to take the first pole position of his Formula 1 career.

No one saw that coming, as all the indications were that pole position was Max Verstappen’s to lose, and lose it he did, as a yellow flag his final flying lap meant he had to settle for second behind the Spaniard.

Charles Leclerc was third in the sister Ferrari, having made an error himself as well on his final attempt to improve.

Qualifying was a breathtaking affair, courtesy of some classic English weather which kept everyone at the edge of their seats till the final seconds of the shootout.

Sainz’s delivered his pole in style, outdriving his teammate Charles Leclerc, and becoming the 104th polesitter in the history of the sport.

“In the end I put together a lap that I didn’t think was anything special, but I just put it on the board and see how it is, and it was pole position, which came as a bit of a surprise,” the Spaniard concluded.

Verstappen, who missed out on pole by 0.073s said after qualifying: “It was quite a tricky qualifying, with the rain. It was raining, drying, so you had to be on the track at the right time. I think overall the car was working really well.

“In Q3 it’s always a bit of a lottery sometimes, when you have to put the fastest lap in,” he added.

“I got a bit hindered on my final lap with the yellow flag unfortunately, but I think still to be on the front row is very good for us and we have a good race car in the dry and the wet,” the reigning Champion concluded.

Leclerc, 0.315s off the pace of his teammate, added: “I am disappointed but happy for Carlos, he did a great job today.

“I spun on that last lap, I knew it was the lap where I had to put everything together and I didn’t as a driver, so I didn’t deserve to be on pole.

“P3 is still a good position to start in for tomorrow’s race and hopefully we can put everything together and come back,” the Monegasque added.

Q3 began as the rain eased off a bit, with the final ten remaining drivers heading out on track for the final shootout on Saturday afternoon.

Max Verstappen almost threw everything away on his first attempt, performing a 360 spin in the final sector, but miraculously making it in one piece.

The Dutchman manages to regain control and continues on his way#BritishGP #F1 pic.twitter.com/1pcHlK4ATb

With more rain expected towards the end of the session, the teams went on pushing to put in the bankers in case track conditions worsened.

Ultimately, with Verstappen hindered by a Yellow flag, and  Leclerc making a mistake on their final runs, the coast was clear for Sainz to take his maiden pole.

Behind the top three, Sergio Perez took fourth in the #11 RB18, 0.633s off pole, while Lewis Hamilton – after showing encouraging improvement – had to settle for fifth, over 1s down from Sainz’s time.

Lando Norris took sixth for McLaren, 0.089s behind his compatriot, while the ever-impressive Fernando Alonso chased him hard to seventh, 0.032s adrift.

George Russell will line up eighth of tomorrow’s race grid, with a 1:42.161 being the best time he could come up with, almost 1.2s down from the top time.

Zhou Guanyu was a brilliant ninth in the Alfa Romeo, outqualifying his more experienced teammate in such tricky conditions that could ambush any rookie.

The Chinese however kept it together, clocking a 1:42.719, while Nicholas Latifi rounded off the top ten. 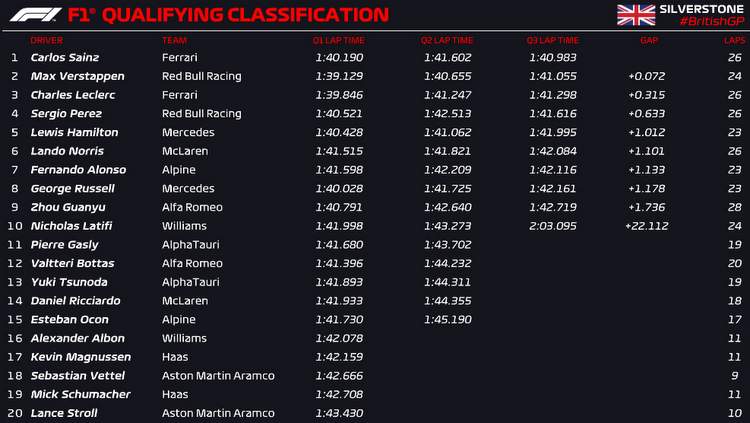 After the rain seemed to be easing off at the end of Q1, it intensified once again at the start of Q2, which meant slick tyres were out of the question, as the remaining 15 drivers took to the track with the green-striped Intermediates bolted on their cars.

The drivers went on trading blows on an evolving track trying to improve their times lap after lap, to make sure they can advance to the final stage of qualifying, especially that the early banker laps may be crucial should the rain intensity increase.

With three minutes remaining from Q2, Norris reported that conditions were getting worse and that he was starting to “aquaplane”.

However, a worsening track meant that Nicholas Latifi emerged as a hero after Q2 – which was topped by Verstappen- as the under-pressure Canadian made it into Q3, tenth in the session.

Celebrations in the @WilliamsRacing garage 🎉

First of the Q2 losers was Pierre Gasly in the AlphaTauri, by 0.429s, and will start Sunday’s race from 11th on the grid, followed by Valtteri Bottas in 12th for Alfa Romeo.

Yuki Tsunoda also failed to make it into Q3 and was 13th fastest, followed by Daniel Ricciardo in McLaren 0.044s behind the Japanese driver.

Another bad result for the Australian who seemed to be improving in the last couple of races. 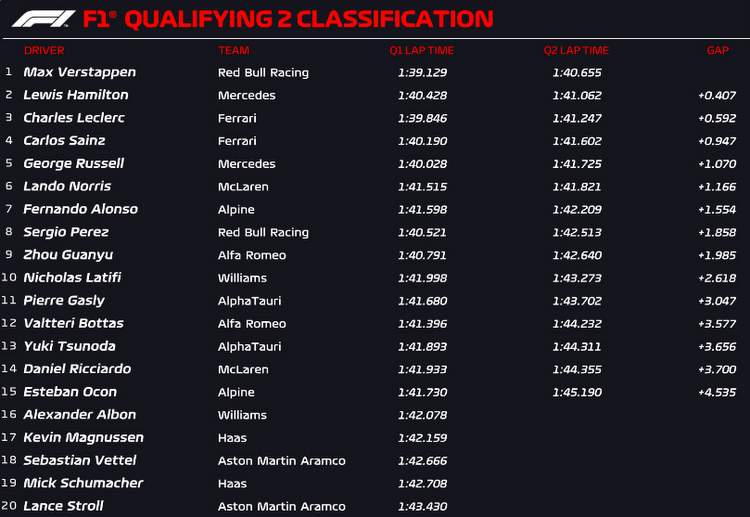 Heavy rain hit the track fives minutes before qualifying was given the green light, and the Intermediates were the tyres of choice for all cars as they head out on track for Q1.

However, McLaren soon reported to Daniel Ricciardo: “We do expect this rain to stop in this session, in the next eight minutes.”

What was apparent, is that the track was evolving quite quickly, as Verstappen’s first timed lap was 2s better than Leclerc’s first just before him, as the latter responded with a second run, 2s seconds faster than the Dutchman.

As the session progressed, the rain stopped and a dry line started to emerge on track, as the cars went on circulating around the rack trying to improve their times.

The track is still wet, but a dry line is slowly starting to emerge, and the rain has stopped.#BritishGP #F1 pic.twitter.com/uB0bpyolmR

However, when the session was over, Verstappen was fastest followed by Leclerc 0.717s behind, as Russell took third for Mercedes.

On the other hand, Alex Albon, with the updated Williams FW44 was the first of the eliminated drivers in Q1, 16th fastest, while teammate Latifi progressed to Q2. A strong statement from the Canadian, despite barely making it.

The Thai driver expressed his discontent with his team’s strategy saying over the radio: “Why are we doing cool down laps? I really don’t understand, I have no grip.”

A frustrated Sebastian Vettel was only able to achieve 18th in the Aston Martin, with a lap time of 1:42.666.

Mick Schumacher was a disappointing 19th after much promise in FP3, as Lance Stroll was dead last in the other Aston Martin. 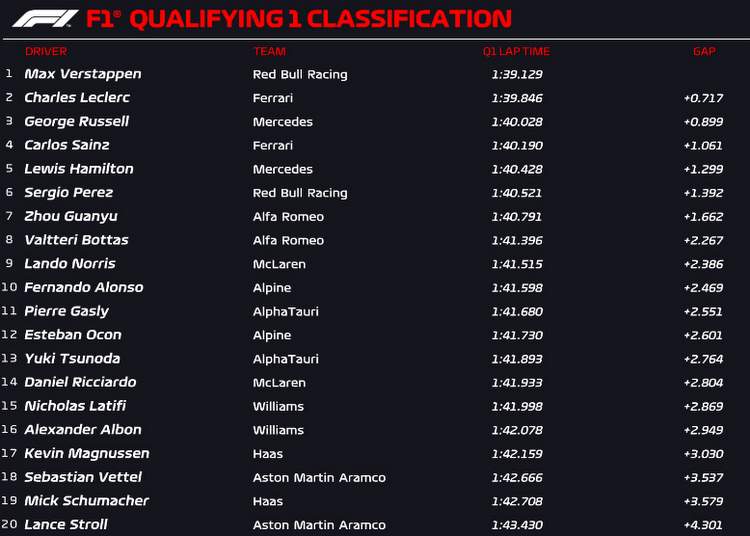