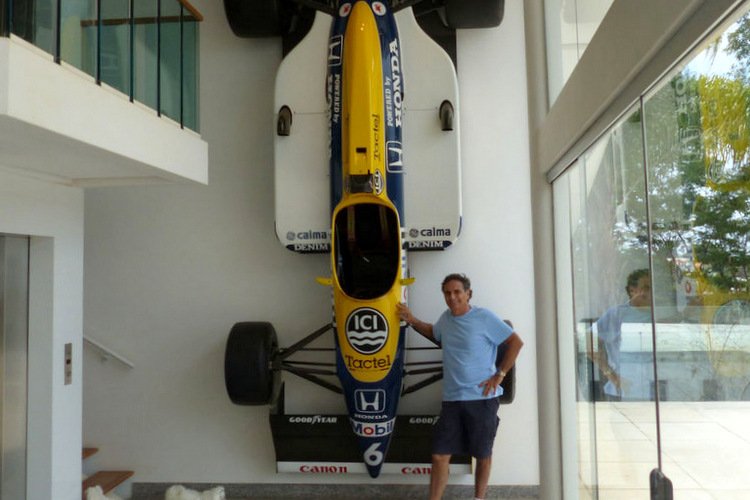 The 69-year-old Brazilian, who won the world title in 1981, 1983 and 1987, used a racially offensive term when referring to Hamilton on a Brazilian podcast.

“Discriminatory or racist language is unacceptable in any form and has no part in society,” Formula 1 said in a statement. Lewis is an incredible ambassador for our sport and deserves respect. His tireless efforts to increase diversity and inclusion are a lesson to many and something we are committed to at F1.”

Piquet was discussing an accident between Hamilton and Red Bull’s Max Verstappen on the first lap of last year’s British Grand Prix when he used the term. His daughter, Kelly, is Verstappen’s partner.

Hamilton, the only black driver on the grid, has been an outspoken campaigner for greater diversity in the sport.

The seven-time F1 World Champion regularly displayed “Black Lives Matter” on his apparel and took the knee before races in the 2020 season following the murder of George Floyd in the USA.

“We condemn in the strongest terms any use of racist or discriminatory language of any kind,” Mercedes, Hamilton’s team, said in a statement.

“Lewis has spearheaded our sport’s efforts to combat racism, and he is a true champion of diversity on and off track. Together, we share a vision for a diverse and inclusive motorsport, and this incident underlines the fundamental importance of continuing to strive for a brighter future.”

The pocast recording of Piquet’s indiscretions came to light in Brazil this week, the story breaking on multiple reputable Brazilian websites, including sports website Lance.com which reported in Portuguese: 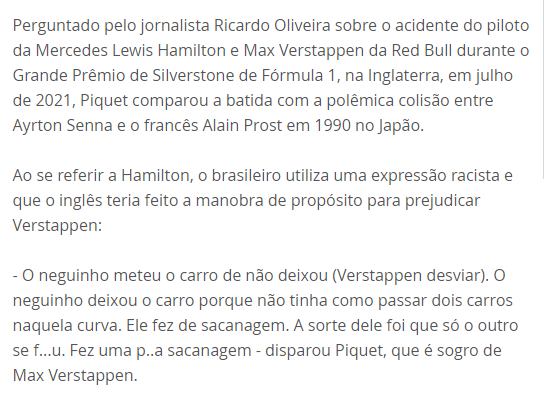 Which translates to English as:

Asked by journalist Ricardo Oliveira about the accident of Mercedes driver Lewis Hamilton and Red Bull’s Max Verstappen during the Formula 1 Silverstone Grand Prix in England in July 2021, Piquet compared the crash to the controversial collision between Ayrton Senna and Frenchman Alain Prost in 1990 in Japan.

When referring to Hamilton, the Brazilian used a racist expression and that the Englishman would have done the manoeuvre on purpose to harm the Red Bull driver on lap one of the race at Silverstone last year.:
“The black man put the car to not allow (Verstappen to swerve). The little black guy left the car wide because two cars cannot pass at that curve. He was devious. His luck was that only the other one f@cked up. He was dirty,” fired off Piquet, who is Max Verstappen’s father-in-law.