Hamilton: I was biting down on my teeth through pain 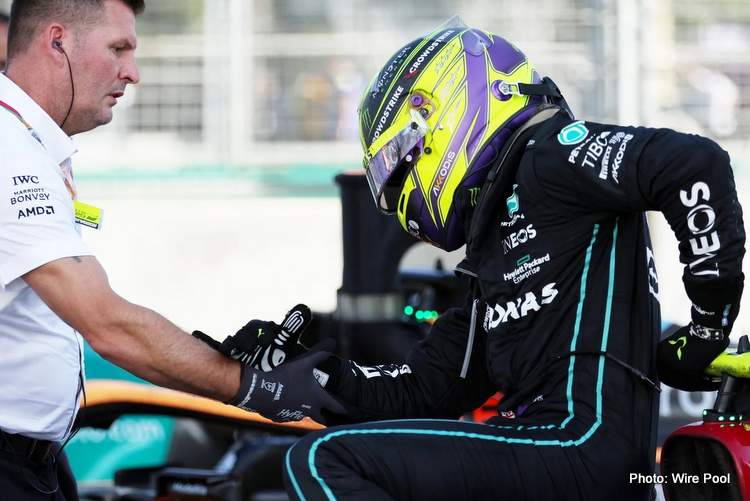 Lewis Hamilton revealed he was biting down on his teeth through pain, as he drove his Mercedes W13 to fourth place at the 2022 Azerbaijan Grand Prix.

It was a bumpy ride for the seven-time Formula 1 World Champion around the streets of Baku, and one had to feel for him for the beating he got from his W13 on Sunday afternoon.

The way he struggled to get out of his car at the end of the race shows the 2022 Silver Arrow is one vicious machine to drive.

“That’s the only thing,” Hamilton revealed that adrenaline seems to have helped Hamilton survive his gut-wrenching race.

“Biting down on my teeth through pain and just adrenaline,” he added.

“I can’t express the pain that you experience, particularly on the straight here. At the end, you’re just praying for it to end,” he admitted.

Hamilton takes the team result as a positive

However, the Mercedes driver is taking the result of his team as a positive, as George Russell took another impressive podium.

“We’re in such a good position still, we got third and fourth which is a great result for the team,” Hamilton said. “The team did a great job with the strategy.

“I’ll be at the factory tomorrow; we’ve got to have some good discussions and keep pushing,” he maintained.

Hamilton added that he was driven by his team members as he fought through the race saying: “And at the end, you’re just thinking of all the people relying on you for the points.”

Mercedes need to find a solution to the bouncing

Toto Wolff added in Mercedes’ team report: “We need to find a solution for the bouncing because the car we gave Lewis today was so tough to drive, you could see the pain in his back all weekend.

“After running on Friday, we knew we had big limitations with the car in Baku so it was a case of maximising our strategy, driving and our operations.

“The team did a great job on all three to ensure we were in the mix and ready to take advantage of any opportunity that came our way.

“Today, it paid off and we leave Baku with a good haul of points but we are under no illusion of the job we have ahead of us to get back to the front.

“There are no holy cows, everything is being looked at and we’ve got a great team trying to solve our issues,” the Austrian concluded.

Hamilton’s efforts however were appreciated by the fans as he was voted driver of the day at the end of the race.