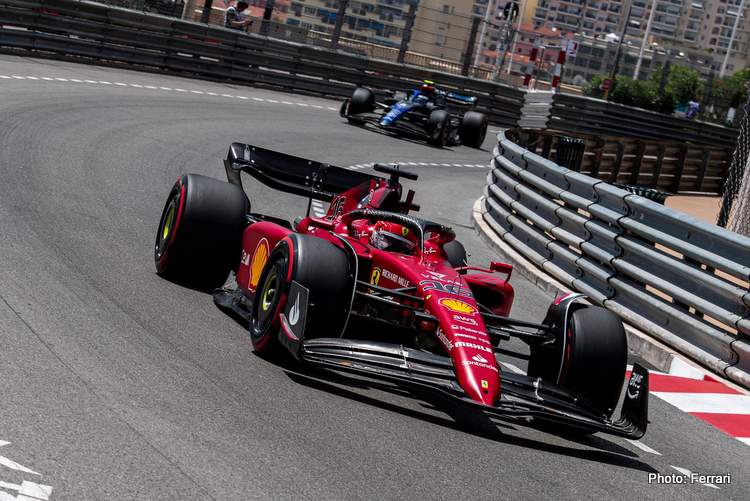 Charles Leclerc survived a last minute melee in qualifying for the Monaco Grand Prix to take pole as Sergio Perez threw all his hard work away crashing in the end.

Monaco never fails to throw last minute surprises, but as Charles Leclerc kept it clean this time, it was Sergio Perez who messed up the last minute of the session, as he was overambitious on his final run, losing his RB18 at the entrance of the tunnel with Carlos Sainz ending up as collateral damage.

Sainz was lucky that his banker lap was good enough for second, otherwise, being collected by Perez would have meant a lower grid position for tomorrow’s race.

Perez has looked better than his teammate Max Verstappen all weekend, and maybe it was an excess of confidence that caused his downfall in the end.

However, also a decent banker lap meant the Mexican was third fastest, as Verstappen took fourth in the #1 Red Bull, the reigning World Champion never appearing confident to push to the limit.

Polesitter Charles Leclerc spoke after qualifying, he said: “It is very special. I’m so incredibly happy. It’s been a very smooth weekend until now, I knew that the pace was in the car and I just had to do the job.

“It went perfectly. That last lap before the Red Flag was really, really good,” he added. “Anyway, it didn’t change anything for us. The car felt amazing and it’s great to have Carlos with me on the front row.

“Dry conditions are a bit more predictable but whatever comes, we are competitive so we will be fine,” the Monegasque concluded.

Sainz who had a very clear perspective of Perez’s accident said: “Perez crashed in front of me and I was on my flying lap. I saw the yellow flag coming into Turn 8, I had to hit the brakes and try to avoid him the best I could.

“It is a shame another red flag costing us the end of the session so that we cannot go for pole position but that is typical Monaco.

“We thought we had really good pace all day and we were just building it up for Quali. We will never know and it is impossible to say but I was feeling good.

“Let’s finish the job tomorrow, I think we are in a good position to get a result for the team, the car has been amazing all weekend so we will go for it,” the Spaniard concluded.

Qualifying in Monaco is arguably the most important session of Formula 1‘s weekend at the principality, as the order of the starting grid after qualifying will decide to a great extent the outcome of Sunday’s race that usually ends up being a procession with limited overtakes, while any race thrills would be down to the weather, the strategy, or a Safety Car.

What makes matters more thrilling is seeing the F1 cars going at it flat out around the confined streets of Monaco, with the best 20 drivers in the world flirting with the barriers, the slightest of mistakes delivering heavy punishment, while a combination of precision and bravery highly rewarded.

After FP3, Ferrari and Red Bull seem very close, but Sergio Perez is leading the latter’s charge up to now as Max Verstappen still could not unlock his R18’s code around Monaco.

Mercedes are back to their bouncy ways, which threw them further down the grid, while Daniel Ricciardo has a mountain to climb after crashing on Friday.

So it would be a Red and Blue fight up front and that’s how it turned out to be.

Perez may have ruined many the day for many drivers in Q3, but Leclerc was untouchable all weekend, and kept his control over qualifying proceedings.

In the end, the Ferrari ace took pole by 0.225s from his Sainz, the Spaniard showing improvement in Monaco, but not enough to usurp his teammate.

Third was Perez, who was only 0.028s behind Sainz, and the struggling Verstappen had to settle for fourth, 0.290s off the ultimate pace, but 0.037s away from third.

Lando Norris was best of the rest, fifth in the McLaren, 0.473s down on the top time, as George Russell took sixth in the Mercedes.

Fernando Alonso was seventh fastest for Alpine 0.871s down from Leclerc’s time, with Lewis Hamilton 0.313s behind him in eighth, unable to improve because of Perez’ crash. 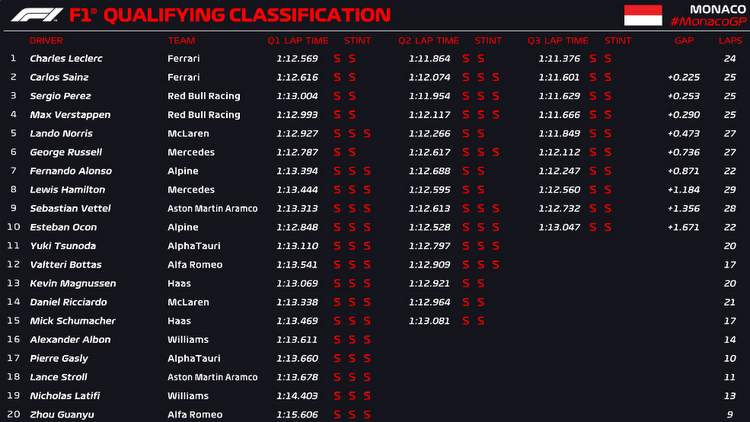 There wasn’t much drama during Q2, as it was clean session with no interruptions, and in the end Yuki Tsunoda was the 11th fastest with a 1:12.797 missing the Q3 cut by a tenth of a second.

Valtteri Bottas did not make it to Q3 as well and had to settle for 12th, over a tenth behind the Japanese.

It was a bad day for Haas as Kevin Magnussen took 13th and Mick Schumacher took 15th, as the pair were split by McLaren’s Daniel Ricciardo.

Ricciardo in 14th was over a second off the session’s best time, and almost seven tenths slower than Norris who made it into Q3. The Honey Badger’s struggles continue.

The Australian said after his qualifying: “I don’t know what the word is, it’s frustrating and just confusing to not make these natural steps that one should…” 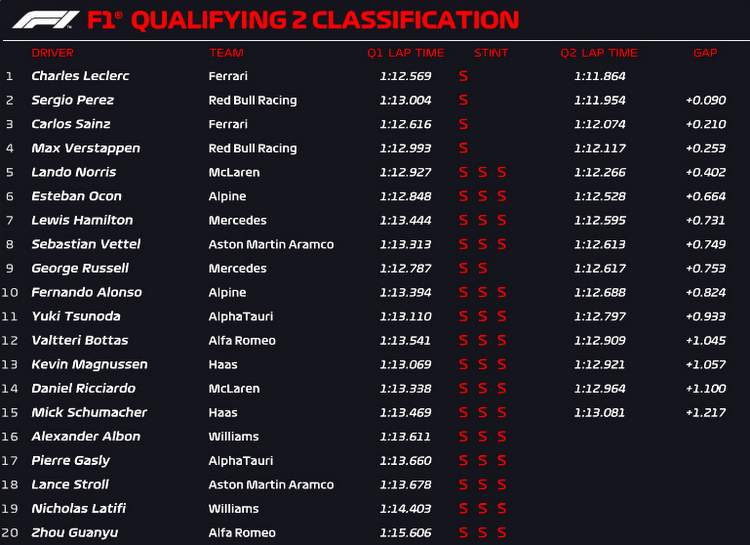 Everything went smoothly in the first part of qualifying, but then with a little under three minutes remaining, a mysterious Red flag was raised, which coincided with Yuki Tsunoda hitting the barrier at the Nouvelle chicane, picking up a puncture.

The Japanese driver made it back to the pits which makes the Red flag even more baffling.

The session was resumed with two and half minutes available, as several drivers ventured out to try and improve as much as they can.

Traffic jams in the pit lane as Q1 resumes

Some drivers might not make it across the line in time to start a flying lap #MonacoGP #F1 pic.twitter.com/6OLNKXuUdy

First to drop out from qualifying was Alex Albon in the Williams who took 16th place, missing the cut by a painful 0.070s.

Pierre Gasly must have been the biggest loser, the Frenchman 17th fastest only, after showing promise during FP3, his chances hurt by the mysterious Red flag.

Lance Stroll did not make it out of Q1 unlike Vettel, and the Canadian will line up 18th on the grid in tomorrow’s race.

Nicholas Latifi was 19th, as Alfa Romeo’s Zhou Guanyu was dead last, the Chinese rookie lamenting an ill-time Red flag over the team radio at the end. 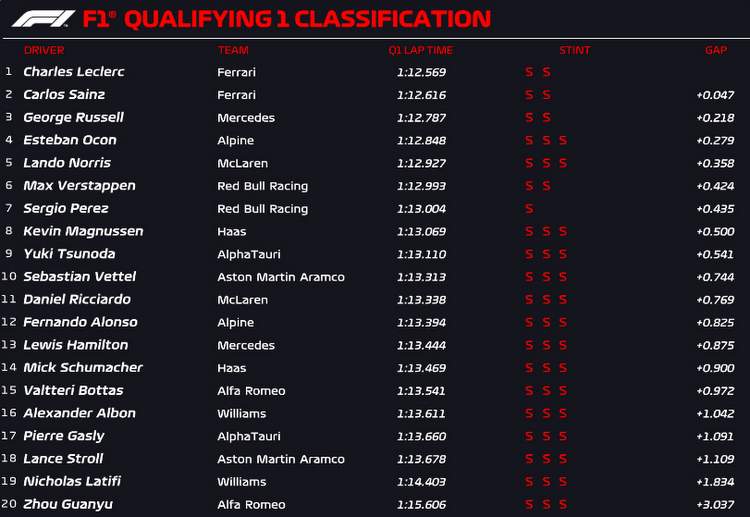