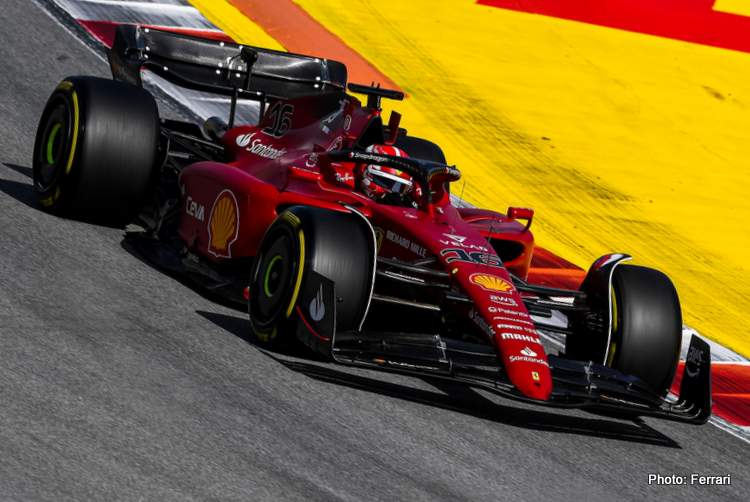 Charles Leclerc made it three in a row going fastest in FP3 in Barcelona, slightly ahead of Max Verstappen with the Mercedes duo chasing hard.

The Monegasque kept his firm grip on the top spot for the third practice session in a row, but Verstappen closed the gap in second, while George Russell validated Mercedes’ progress to go third fastest.

Lewis Hamilton was fourth fastest in the sister Mercedes.

Hours away from qualifying in Barcelona for the 2022 Formula 1 Spanish Grand Prix, FP3 was underway at the Circuit de Barcelona-Catalunya, the last chance for all the teams to dial their cars in before things get serious.

With many teams bringing upgrades to their cars, it becomes critical for them to understand their updated machines as fast as possible before they send them out for the qualifying shoot out.

With Barcelona being notorious for the absence of overtaking opportunities, and the new generation of F1 cars yet to prove they facilitate overtaking despite their ability to follow closer, the emphasis is on achieving the track position for the race on Sunday.

It would be interesting to see if Mercedes can continue the resurgence they showed during FP1 and FP2, as the upgraded W13 seemed to be more tame.

Damon Hill spoke of Mercedes on Sky Sport F1 and said: “The vibe coming out of Mercedes was very, very positive, they could hardly contain their excitement actually.”

Can Mercedes keep the momentum?

Aston Martin, on the other hand, are under the spotlight for their “Green Bull” that showed some promise in the afternoon session on Friday after a slow start to their revamped AMR22.

Ferrari seemed to be in good shape over one lap, but suffered degradation on long runs, with the opposite applying to Red Bull.

The damage Lando Norris caused on his McLaren during FP2 also require a chassis change for the MCL36, while Carlos Sainz switched to a new chassis as well after suffering a fuel system issue on his F1-75.

Mattia Binotto said of Sainz’s problem: “We had to change the chassis simply because he had fuel leakage on his fuel system which was not clear where it was coming from.

“We would have lost time simply trying to understand where it was coming from and trying to repair and we opted for a change of chassis,” he added.

AlphaTauri’s Pierre Gasly has barely done any running when he returned to the pit with a smoking car. Game over for the Frenchman, quite a hit ahead of qualifying.

this unfortunately means he won’t take part in the rest of FP3 pic.twitter.com/N6pLHTN2bo

Mick Schumacher suffered a brake problem 15 minutes into the session, as his rear right brakes seemed to blow up, and returned to the pits with fire engulfing his rear right tyre, the German unable to stop the car and overshooting his team’s garage.

The fire has been put out and he’s back in the garage#SpanishGP #F1 pic.twitter.com/rPacCdgIO4

Lewis Hamilton seemed to suffer a problem with the DRS on his W13 while running on the Soft tyres, and was called into the pits to have it sorted out almost 25 minutes into the session.

Max Verstappen was not happy with his RB18 during FP3, and reported on the team radio: “The car just doesn’t turn. Turn 5 is terrible; the last chicane as well.”

However, the Dutchman re-emerged after some setup work on his car and went second fastest with less than ten minutes remaining in the session. He remained there.

There was nothing to choose between Leclerc and Verstappen, as the latter’s time was only 0.072s off the former’s 1:19.772.

Russell was third, 0.148s off the pace while Hamilton was fourth 0.082s shy of his teammate’s time, which bodes well for the Silver Arrows ahead of qualifying.

That’s a wrap for #SpanishGP practice, with George P3 and Lewis P4 in #FP3! 👏 Next up, Quali! 👀 pic.twitter.com/wDY7Adrwrp

Carlos Sainz was fifth fastest with his new chassis 0.357s slower than his teammate, with Sergio Perez sixth, 0.131s further behind.

Lando Norris was best of the rest in the McLaren in seventh, 0.631s off the top time, with Kevin Magnussen in the upgrades-less Haas a respectable eighth 0.243s slower than the Briton.

Valtteri Bottas was ninth for Alfa Romeo a second off the pace, as Esteban Ocon rounded off the top ten for Alpine with a 1:20.882.

The struggles of Daniel Ricciardo continued in Spain, as the Australian finished FP3 11th fastest, 1.138s too slow.

Both Aston Martins were out of the top ten, Sebastian Vettel 12th, and Lance Stroll down in 16th. 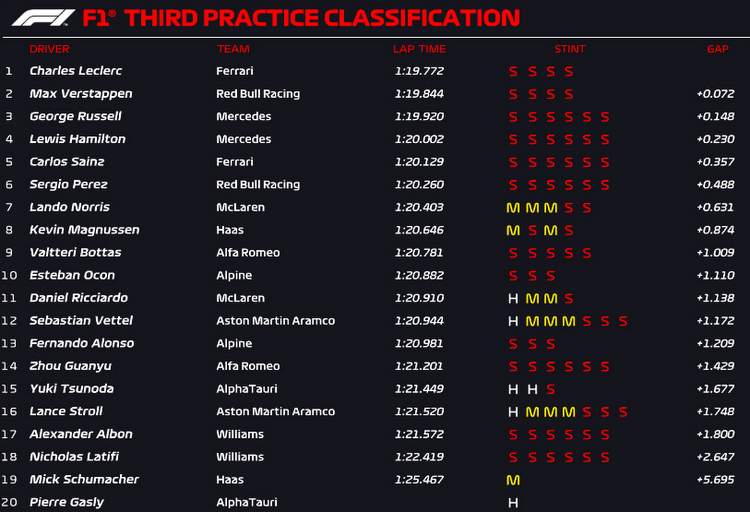