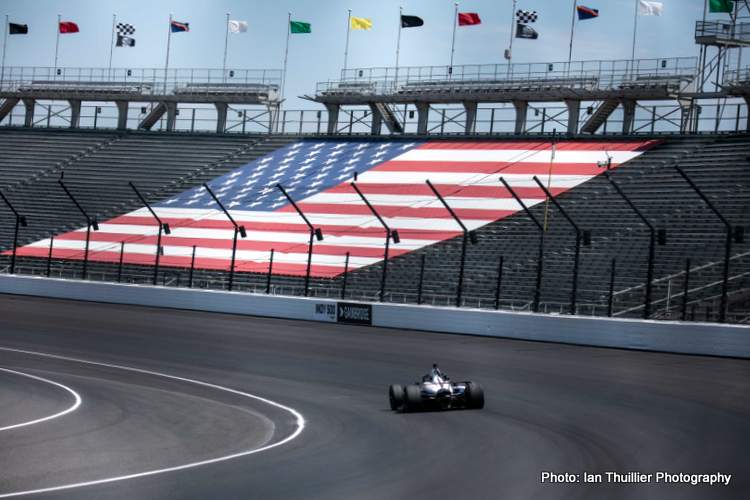 Monaco Grand Prix and Indianapolis 500 on the same day, 29 May 2022, is tantamount to motor racing sacrilege as these two great races are two-thirds of that elusive Triple Crown of Motorsport.

For much of his reign as FIA chief Jean Todt, for whatever reason, appeared to care less that these two great races clashed and as a result this year they do again which means a very busy next week of news on this site as we juggle F1 in Monte-Carlo and the Indy 500 – timezones are friendly to stacking the coverage as we will do.

Why Indy 500 while Monaco is on too? Simple we cannot ignore the Indy 500 and its importance as a race. We have McLaren in there, a team with an illustrious history in F1, and hopefully a pool of Indycar talent that could one day race in F1, not to mention a team or two in the future.

Theres should be more synergy between F1 and Indycar, and we sincerely hope that under FIA President Mohammed Ben Sulayem, a motorsport man, does not allow these dates to clash during his reign.

A visit by the new FIA chief to Roger Penske at IMS is a clear indication that there is respect, hence the relevance. But that is not what this is about!

It’s about Ian Thuillier, an artist behind the camera who takes us on his journey – brandishing GRANDPRIX247 credentials – to witness his first-ever Indy 500, while there and at it he will type some notes if not daily when time permits); the first of which is the piece below and, of course, to make art which we present in this post.

When you can please visit Ian Thuillier Photography’s website to see what he is all about and, with no further ado, here is what Ian has to say after the first day of practice. – Paul Velasco.

Ian: So here I am at Indianapolis, the Racing Capital of the World 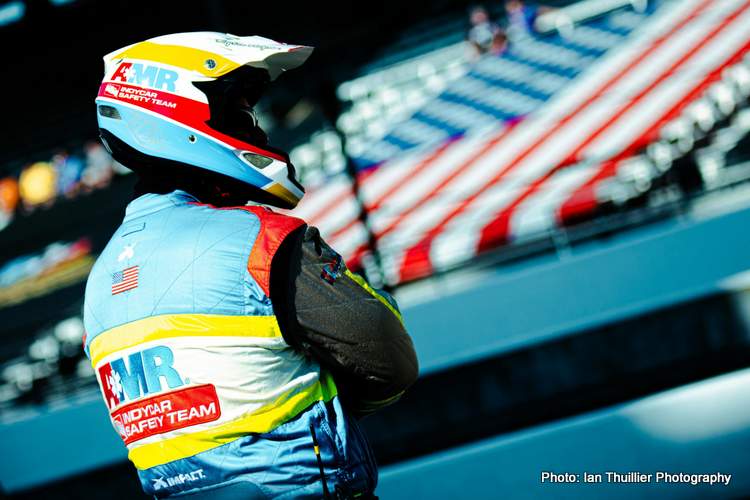 The Indy 500 has always been on my bucket list to photograph. After watching the race on and off for the last twenty years or so on television, I finally get to be here and scratch it off the list.

The most obvious thing that strikes you when you arrive to the circuit is the enormity of the place and the grandstands of which there are many circling the track. It’s not unlike a giant sprawling colosseum. And these great grandstands seem to harness the sound of the cars so when they are racing on track at full pelt, it’s damn well loud.

The circuit was paved in bricks in the fall of 1909. Just one yard of bricks remain across the start/finish line and when you step on them you can feel the hallowed history beneath.

You get a sense of its history. Traditionally held on the Memorial Day weekend, the Indy 500 or more affectionately known as The Greatest Spectacle in Racing, is part of the Triple Crown of Motorsport along with the Monaco Grand Prix and the Le Mans 24-hour.

It takes about forty minutes to walk the track, a snail’s pace compared to these IndyCar rockets doing it in about 40 seconds, hitting speeds of close to 240mph around 2.5 mile oval. I was shocked to learn that the attendance for the Indy 500 will be approximately 450,000 people, and that’s just on race day!

Unlike my first F1 race in 2017 at the Russian Grand Prix and Formula 1 in general, IndyCar seems far more accessible and welcoming. Drivers are kind and friendly – for example, I saw Takuma Sato on a scooter stop and turn around to sign autographs for a couple of kids.

I witnessed Pato O’Ward waiting patiently with a group of fans as they each took selfies with him. There seems to be no pedestal here unlike in F1 which is a breath of fresh air.

The pit lane is easy to navigate. Staff and mechanics are easy-going and I try not to get in their way when taking my shots. Everyone is super welcoming. To be here really is a joy. That friendliness extends to the street also.

When I ask people who their money’s on to win, the answer is either Jimmie Johnson or Josef Newgarden. Not a bad choice considering Newgarden has already won two races this season and Johnson is a seasoned oval winner in Nascar.

Not having photographed a racing car in a few years, the prospect was a little daunting when I went out to capture practice 1 for the for Indy 500, but it all came back to me like riding a bike. Trying to find a good photo spot around the track though is a challenge.

I walked the inner and outer perimeter until my feet would go no more. Unlike at F1 circuits, there seems to be a fewer number of photo holes than I would have liked, but then again F1 doesn’t race on ovals.

First out is British rookie driver Stefan Wilson. His goal is to complete a number of laps between 210mph and 215mph. He has a two-hour stint and the circuit all to himself as part of a rookie refresher course and then after that it’s all drivers for three hours.

It seems everyone is getting as much running as possible as they expect rain tomorrow [Wednesday] so I’ll jump off here and see where my camera takes me around the racing capital of the world. 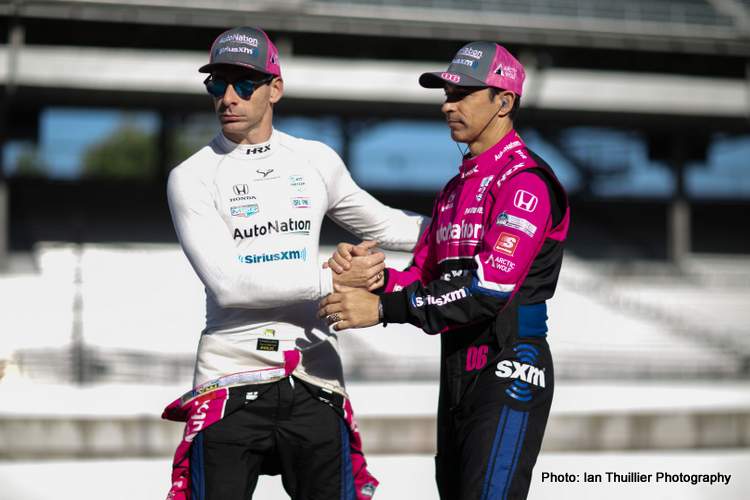 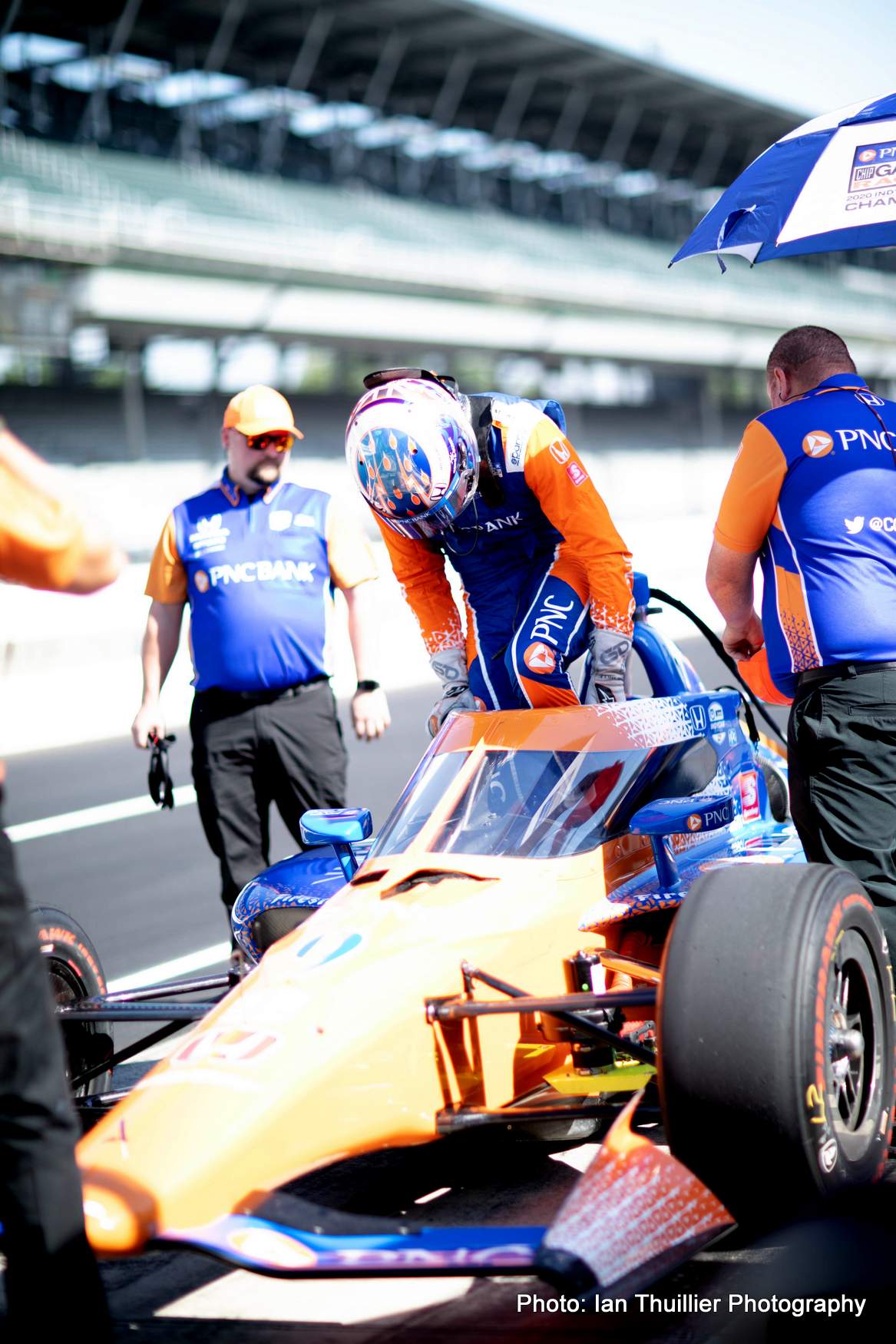 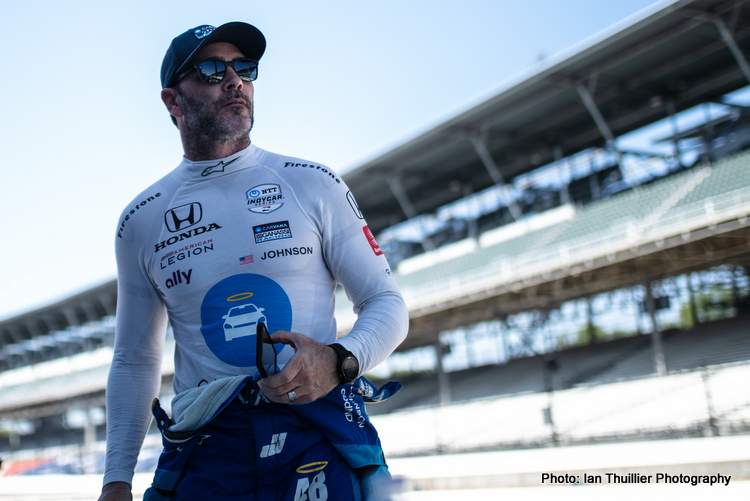 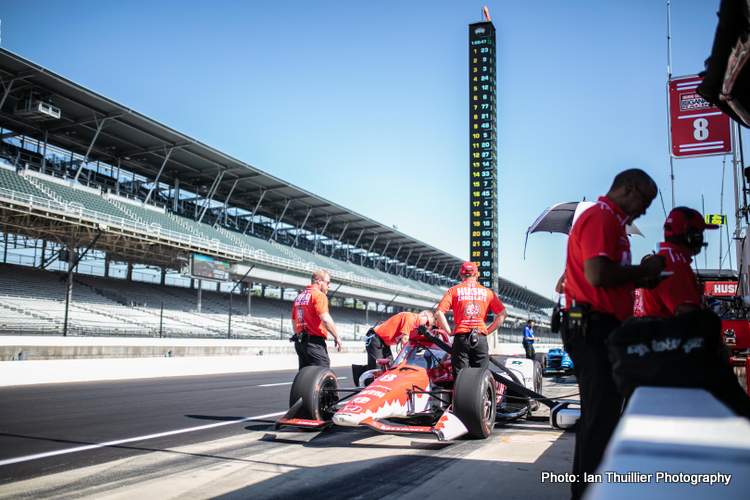 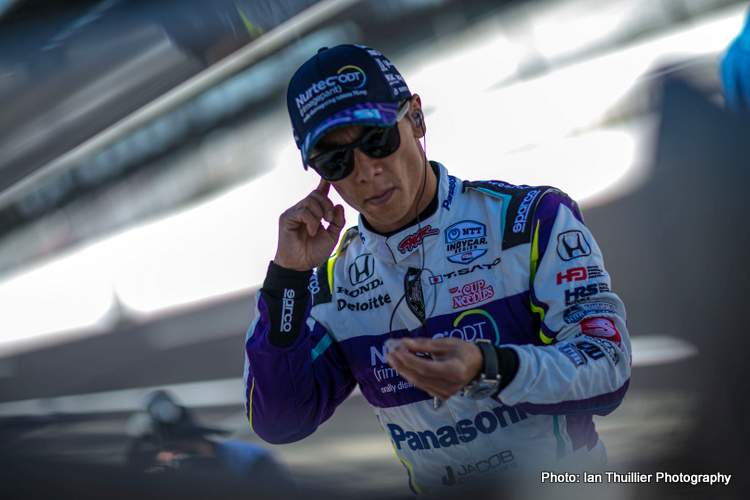 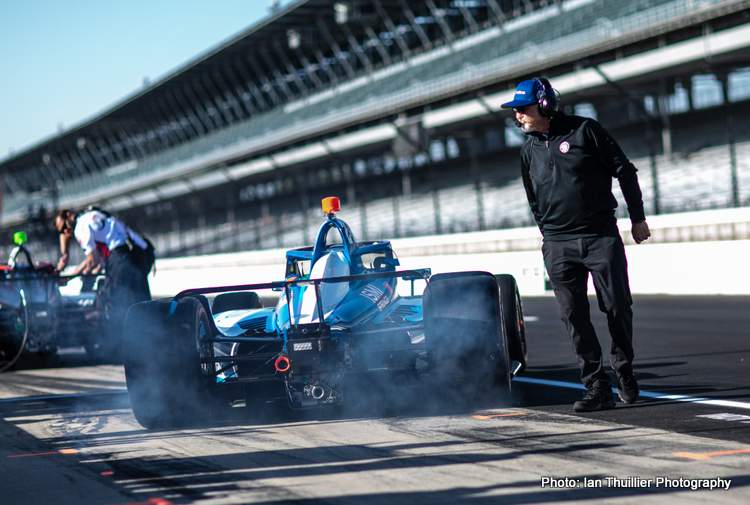 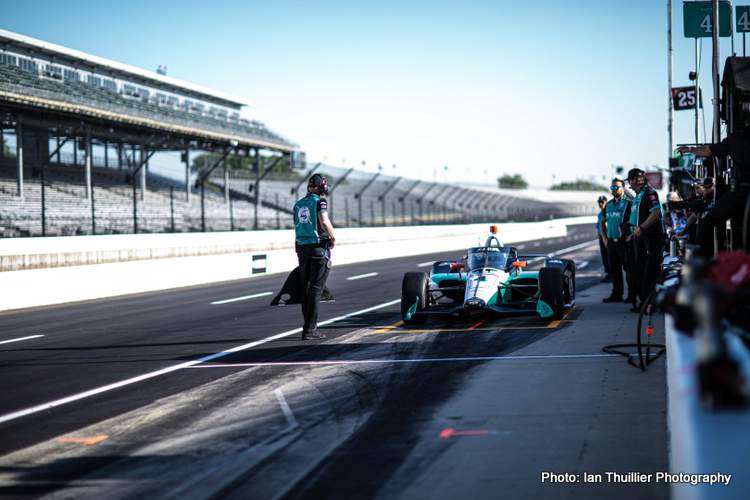 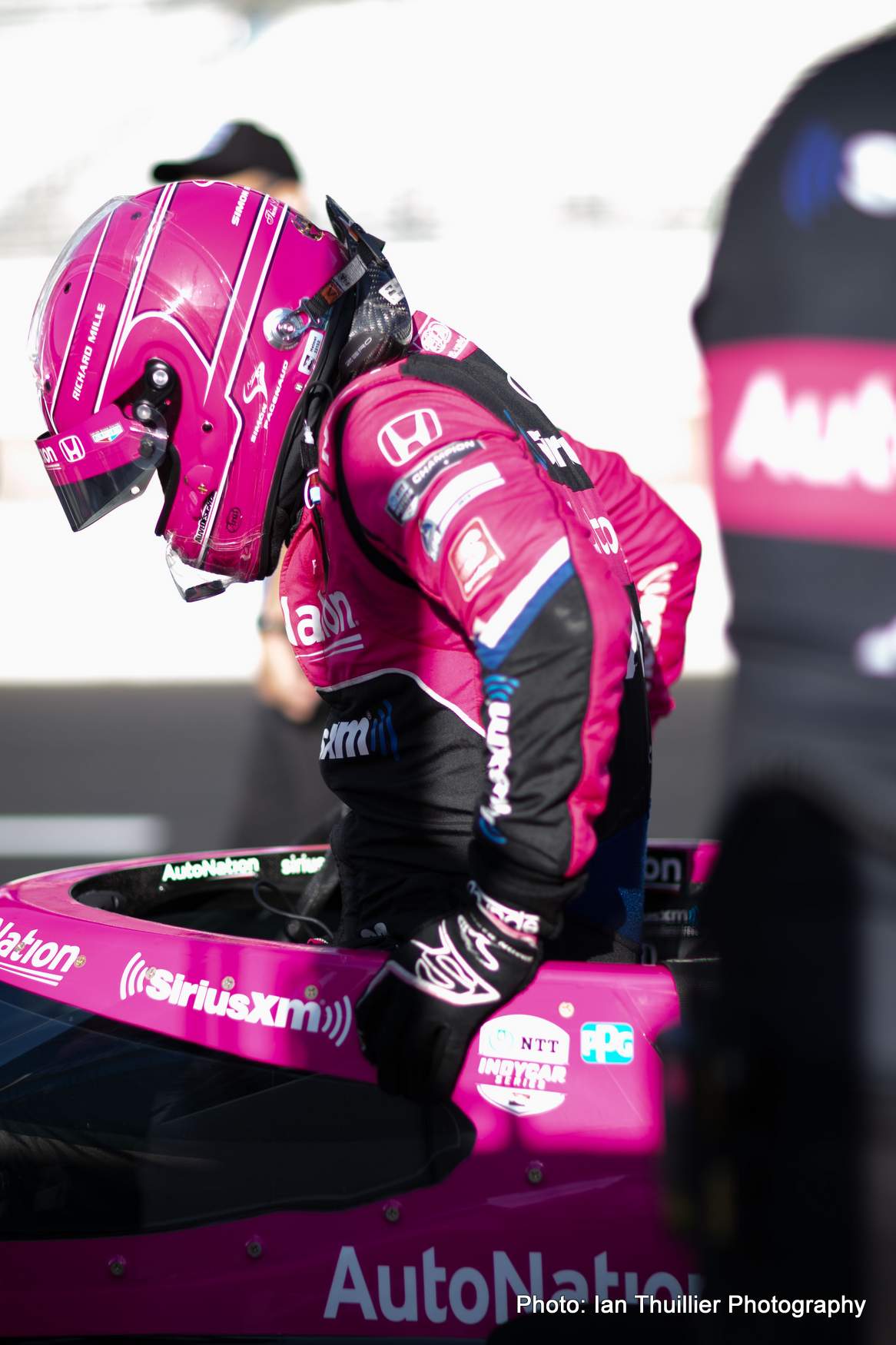