Russell: We’ve got to be in it to win it 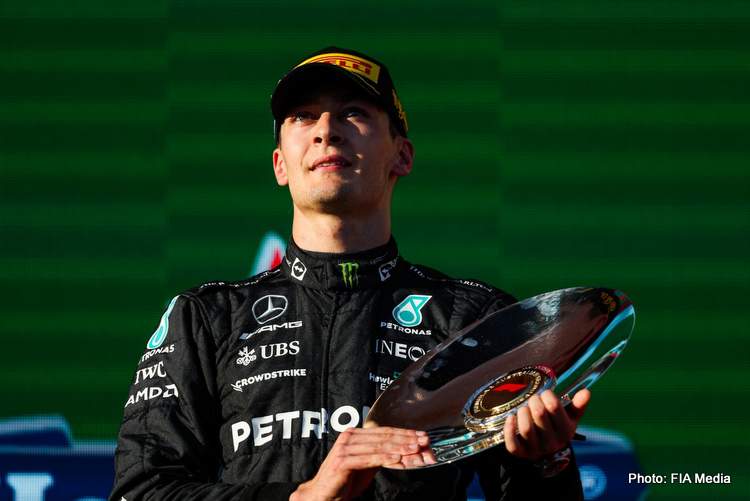 George Russell took his first podium with Mercedes at the 2022 Australian Grand Prix, the Briton insisting the team needs to keep pushing and capitalize on the chances offered to them.

Despite their poor form at the start of the 2022 Formula 1 season, Mercedes have been able to benefit from others’ mishaps and misfortunes, getting a podium with Lewis Hamilton in Bahrain, and another for George Russell in Melbourne.

While they have not been able to compete in terms of raw pace, the World Champions have had decent race pace, sufficient to keep them in the mix to make use of unexpected events, such as Max Verstappen’s retirement on Sunday down under in addition to the Safety Cars.

We got a bit lucky, but we’ll take it

“We’ve got to be in it to win it and capitalise from others’ misfortune,” was the first thing a jovial Russell said after the race.

“We got a bit lucky twice, but we’ll take it and there is so much work going on to try to get us back to the front,” he added.  “To be standing on the podium is special.”

Russell later said in the team report: “The guys at Brackley and Brixworth have been working so hard on giving us a reliable car.

“There’s so much hard work going on back at base to try and get us back at the front so to be standing on the podium today is special a reward for all their hard work.

“We’re never going to give up, we’ve got to keep on fighting. This weekend we were a long way behind our rivals but here we are standing on the podium.

“We’ve got to keep this up while we are on the back foot, maximise our points opportunities and I am sure we will get there after a few more races,” the Briton concluded.

Mercedes team boss Toto Wolff reflected on the team’s result in Melbourne in the team report, claiming the team has now more knowledge in where and how to improve.

“We are leaving Melbourne in a better state than when we arrived- more lessons learned, more data to analyse and more points on the board,” he said in the team report. “Clearly we haven’t got the pace yet to challenge Ferrari and Red Bull but we know where we need to seek performance. One factor that leaves me very optimistic for the future is the mindset and strength of the team.

“Everyone in the UK, in Stuttgart and in the travelling race team is pulling together every ounce of effort we have to tackle the performance gaps with determination and a deep hunger,” he added.

“Seeing Lewis and George perform at an exceptionally high level today with a tool that is clearly not on the pace of the leaders is another example of the spirit of this team.

“We are optimistic yet realistic on the timeline for improvement and the advantage our competitors have, but P3 and P4 helps us leave Australia with a good feeling.

“Both drivers deserved the podium today, Lewis was unlucky with the timing of the Safety Car but the partnership between the two and how they work with one another epitomises the overall spirit of the team,” the Austrian concluded.