Norris: The car is the same that’s the problem 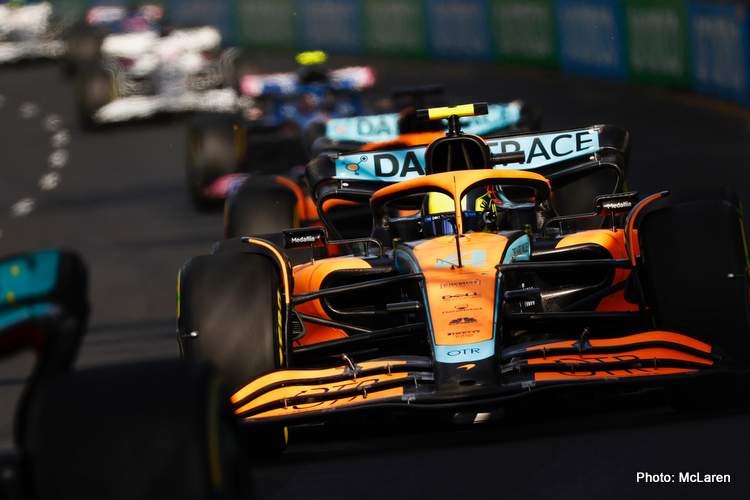 Lando Norris downplayed his 2022 Australian Grand Prix fifth place, as he claims the McLaren MCL36 has not changed, rendering the strong Melbourne performance a one-off potentially.

McLaren might have seemed a better team in Melbourne, and their double points finish in Sunday’s race down under showed that they are in better form, but Norris is not carried away with the result, claiming nothing has changed about the MCL36 other than it might have been more suited to the Albert Park circuit.

Speaking after the race to F1TV, he said: “The thing is if we went back to Bahrain, we would still be P13 in qualifying, two laps down in the race.

“The car is exactly the same which is the problem,” Norris pointed out.

But when quizzed about the improved pace the team showed, he responded: “We understand that the track is a lot smoother and suits the car a lot more, we can put it in a more optimum range.”

Later in the team’s press release, Norris spoke of his race in more positive manner, probably after some advice from the McLaren media team.

“A decent race,” the youngster said. “We didn’t have the best of first laps but I think by the end we were still in good positions for us as a team, and we couldn’t have done a lot more.

“I think Mercedes had much better pace than us today, so we’re happy with where we ended up. Good points for us, a great pit-stop and good progress from the team.

“We’ll take what we’ve learned today and try to carry it with us into the next few races,” the one-time pole sitter concluded.

Andreas Seidl: A great result for the team

McLaren’s team principal, Andreas Seidl, hailed the great performance of his team in Australia, and reflected in the race in the team’s press release, and stressed on the performance gains achieved.

“P5 and P6 today. Two cars home and our first double-points finish of the season,” he said. “This is a great result for the team, thanks to everyone in the garage, back at the factory for all their hard work and to our colleagues at Mercedes HPP.

“It was good to see that we could confirm the progress we made in terms of car performance over the weekend also in the race,” the German added.

“Special thanks to Lando and Daniel for their excellent work behind the steering wheel all weekend, extracting everything we have out of the car. I don’t want to forget to mention our pit-crew.