Ricciardo: Mercedes still got a bit to find in its power unit 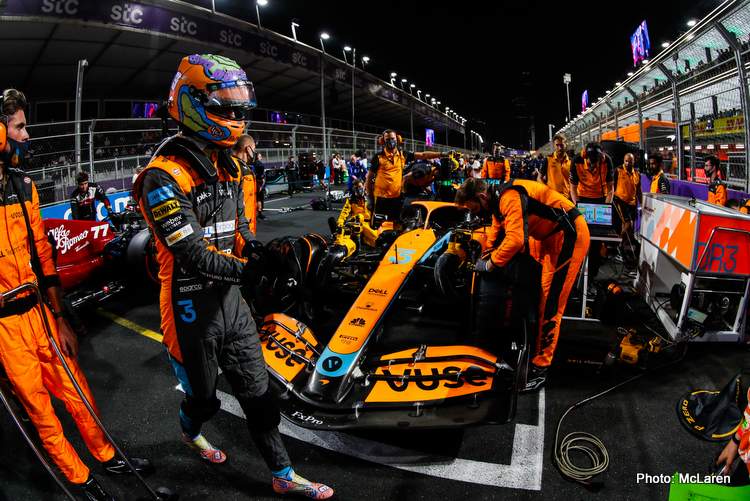 Daniel Ricciardo believes Mercedes have still got to find more performance from their PU, as Mercedes-powered teams occupy the lower end of the grid after the first two races of the 2022 Formula 1 season.

Mercedes are not only struggling with their new W13’s chassis, but it seems their troubles extend to their new-for-2022 power unit, with the teams they supply hogging the lower end of the grid in qualifying and races, as F1 heads towards the third race of the 2022 season in less than two weeks.

McLaren’s Daniel Ricciardo, who retired from the Saudi Arabian Grand Prix last weekend, called on his team to fix what they can control in the car, but also revealed that Mercedes is short on power.

“Not to go hard on McLaren but, obviously, I still want us to address our controllables first,” he told the media in Jeddah.

“It’s no secret that Mercedes, let’s say, have still got a bit to find,” the Australian revealed, and claimed that Mercedes-powered teams are running lower drag setups to compensate for less power.

Ideally; max downforce and power to cope with it

“I mean, racing the Aston [Martin] – obviously with the same power unit – I could see even just by the size of their wing that they were running a very different set-up,” he explained

“It looked like they were trying to go low drag to maybe make up for a deficit, or run that compromise. It certainly helped them in some areas but hurt them in others.

“Ideally, you want to run max downforce everywhere and have the power to be able to cope with it. But yeah, I obviously have faith that they’ll find a way to keep fighting and squeezing a bit more out of it.”

However, the Australian has faith that Mercedes can sort the PU out insisting: “Let’s say, in this situation, there are no better hands I would rather it be in.”

With McLaren struggling for performance this year, the Honey Badger has called for calmness and solidarity as the Woking squad try to navigate themselves out of the pit they are in now.

“Look, if in two races time we’re flying for top five then okay, we’ll take it and that’s a bonus,” he said. “But I think mentally, [it’s important] to remain calm, chill, level-headed and sensible; you need to realise that we’re not looking for three, four tenths – it’s over a second if we want to fight for wins.

“I doubt it’s going to come overnight. So we have to just be patient and I think, for the wellness of the team, it’s important to do that.

“It’s too early to cause a ruckus,” Ricciardo, whose home race is up next in Melbourne on April 9, maintained.

It really is a team sport. 🧡 pic.twitter.com/cX65LCNdsq